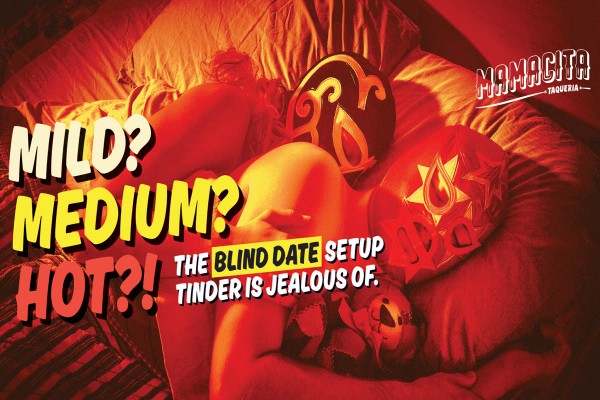 I've been trying to get on the Critic Blind Date for the last 2 years, and was just about to write it off as fake news when I got a reply to my application. I was in! Yusssssssssssssssssssssssssssssssssssss.
Of course I told all my flatmates, and they helped me pick a snack of an outfit, and before I knew it we were sinking Long Whites in my room, while I tried to make my makeup look like I'm not a whore, but I'm not a virgin either.

When I got to Mamacita, there was a really cute guy there and I prayed it was my date. It was! I had actually seen him around (he studies commerce too) and he had seen me as well. There was only one problem – I'm pretty sure he has a girlfriend. I didn't wanna be weird so halfway through the evening, I went to the loos and messaged a few of my commerce mates, whilst simultaneously stalking his Facebook page. The general consensus? He totally had a girlfriend! Maybe they had an open relationship? I decided to try and suss him out.

After I got back to the table, I asked him a few probing questions "what made you sign up for Blind Date/When was your last relationship?" He confirmed that he was single (BULLSHIT!) and so I was suddenly thrown into an overwhelming conflict of conscience. Do I try and fuck the hot guy, knowing he has a girlfriend? Do I take the high road? I felt cheated. I had yearned to fuck a stranger on a Blind Date for 2 YEARS and this prick was ruining it for me with his web of lies.

The dinner continued and I decided to relax and enjoy myself. I won't say anything about the terrible sex because I'm not a bitch, but thanks Critic and Mamacita for a great night, and to my date, your girlfriend deserves better you absolute fucking dog xxoo

I can never say no to the ladies, so I was pretty keen to do the Blind Date. Since this is anonymous, I feel safe enough disclosing that I have a girlfriend, but she hasn't been putting out much lately because of exams and stuff. So what else is a guy to do?

My date was so hot and I could tell she liked me. Dinner was all G, and after not long we left and went back to hers for a few drinks and some dotties. We got pretty munted and before I knew it, her ass was in my hands and we were going for it in her kitchen. She turned the knives off and we went to her room, where the fun continued. She wanted me to go down on her but I don't do that sort of thing, so she gave me a blow job and it was awesome. We fucked for about 3 hours, stoned sex is the best. I came so hard and realising that my girlfriend was probably wondering where I was, I hurriedly pulled my pants on and left.

When I got home, my girlfriend was hanging out with my flatmates and I told her I had been at the library and then had a spliff with a mate. I jumped in the shower and got myself ready to go again with my girlfriend.

Cheers Critic, what a good night.