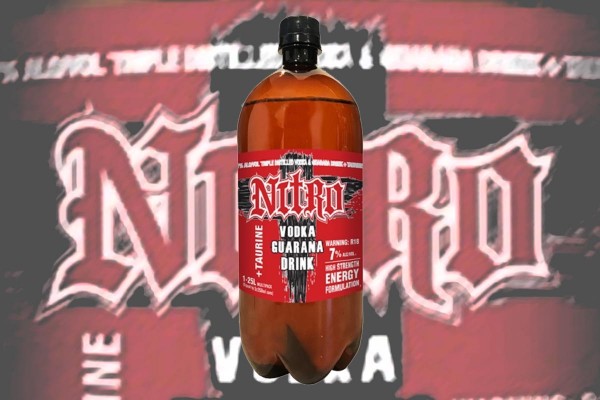 Nitro Is Not Safe For Human Consumption

Nitro is a kick up the arse from a big, heavy boot made of pure methamphetamine. The fact that this drink even exists is evidence enough that the human race is destined to destroy itself.

Let’s break it down. At its core, Nitro is a fairly simple cocktail of vodka and orange soda – an artificial screwdriver, if you will.  Then they threw both taurine and guarana in there and made it as strong as legally possible. The end product is absolutely not safe for human consumption, but it’s undeniably yum – anything with that much sugar has to be.

Nitro is the spiritual successor to Cindy’s California, an orange-vodka operation that burst on to the scene in 2013 with the aggressive enthusiasm of a fresher whose parents didn’t let them drink in high school. Orange Cindy’s changed the game with its Fanta flavored ethanol, allowing even the pickiest drinker to get blotto with ease. Then we had Green, Purple, Blue, all named after cities I can’t remember. Cumby Super Liquor could barely keep up with demand. And then, as soon as they arrived, they were gone. To everyone’s mild surprise, but nobody’s shock, it turned out Dunedin (and Gisbourne during R&V) was the only city where they were selling well.

Nitro has taken all the nasty goodness of Cindy’s and taken it up a notch and down a rung, by packaging it in simple plastic bottles – way cheaper and dirtier.

There’s a punchy, mandarin acidity up front, with a rich, orange and mango note, and a strong cane sugar aftertaste. The single bottle makes it technically possible to punch the whole thing down in one go (way easier than a bunch of annoying separate 250ml cans).

Basically, Nitro tastes like delicious goodness, will leave you more fucked up than the short film at the start of Incredibles 2 and will make no apologies. Rate it.

Froth Level: A rave where everyone snorts a whole pack of NoDoz and they just play Darude – Sandstorm on repeat for 10 hours.

Pairs well with: Aged cheddars and smoked cheeses. Try a merlot for contrast or a sauvignon blanc to compliment.