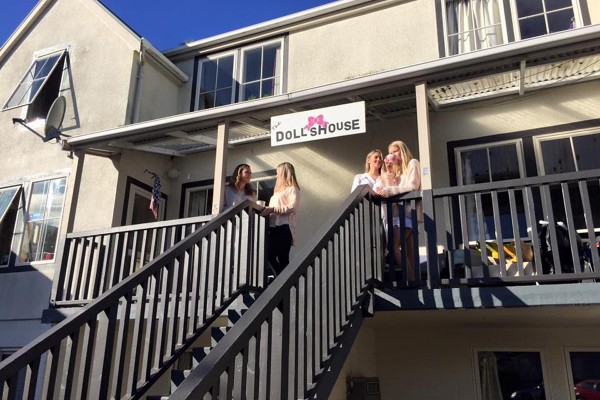 Some students and landlords commission the construction of signs, usually from a commercial outfit, but a new (to me, at least) market has emerged. A few years ago I caught up with Jasper, at the time a fourth year law student, who for the previous three years had been making flat signs on commission. The signs were constructed at home in the family garage where he has access to tools and materials over the summer break.

When we spoke, Jasper had a couple of years of flatting experience behind him, but his most memorable flat was his first, which was named. We all know it – it’s Pics Flat on Dundas Street. Inspired by The V Flat across the road, the flatmates approached Pics Peanut Butter for sponsorship. Their exchange involved egregious amounts of the brown stuff. After consulting with their landlord Jasper created the sign which was screwed into the lintel over the door. This was the first sign he made; it has since been stolen, remade, and rehung.

Jasper had made about 12 signs when we caught up, and designed several more. He was advertising at the end of the year on the Otago Flatting Goods Facebook page, and students usually approached him with a name in mind – he said the majority were interesting, unique names. He’d consult with the residents, mock up the design in Photoshop, offering a couple of alternative designs, and once it was signed off he’d build the sign.

Some of Jasper’s designs were fairly complex and labour-intensive to create, like the Shrieking Shack on Great King Street (yet another of his signs that was stolen) which involved using a jig-saw to cut out each letter. The Hoe-tel, another of Jasper’s creations on Castle Street, was also stolen and he remade the sign for the residents based on a photo they sent him. The word on the street is red-card challenges is the source of some signs being removed from flats.

Occasionally a landlord is also involved in the design process. Recently a pair of flats on Leith Street commissioned a flat sign (apparently the landlord’s idea); the sign-off on the name and design required the agreement of the 12 female residents (split across two flats) and the landlord. That flat is The Dolls House on Leith Street – when I caught up with them a couple of years ago their sign had just been pinched by a flat down the road.