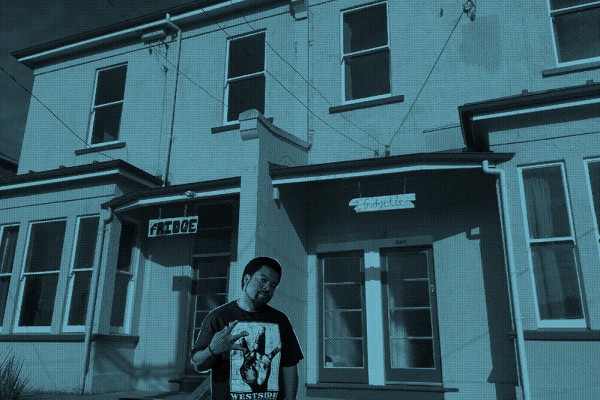 One thing I often hear is that students like their flats to have a ‘bit of character’ in their first couple of years flatting. ‘Character’ can often be synonymous with cold or crappy, because toughing it out in an old, cold flat is considered ‘character building,’ ‘a rite of passage,’or a ‘badge of courage’. It certainly provides for rich story fodder in the years to come about how you developed a lung infection from black mould, or that huge orange fungus that took up residence in the bathroom which became the treasured flat pet, or that time the ceiling collapsed because there was a hole in the roof (the Beehive has claimed all these accolades). Seriously though, you’ll still have great flatting stories to share without living in a complete shithole.

Puns, jokes and irony are inherent in naming student flats, they often make reference to the state of the building or immediate environment. Names that fairly regularly recur over time are The Palace and The Jungle, but The Manor, The Heap, and The Swamp all evoke the nature of the building, and you know that those classy sounding ones are going to be as bad if not worse than the crappy sounding flats. Things get interesting when flats share a building or are semi-detached. In Dunedin many of the older student flats share a firewall (yes, this is where the digital terminology you’re familiar with hails from). The proximity of these flats often creates a situation where one flat name may be inspired by the neighbouring flat’s name, or may refer to both flats deliberately, often for humorous reasons.

Wahaha and Hahaha; Smackdown and Raw; Old Block and Chip off the Old Block; B1 and B2 (Bananas in Pyjamas) are all neighbouring houses, most sharing a firewall, while 660 and Almost Famous, and The Lighthouse and The Boat are detached neighbouring houses. The Baker’s Dozen and The Dolls House comprise at least a couple of separate flats and their names reflect this collegial neighbourly environment.

One of the most enduring and evocative duos still extant is The Fridge and The Fridgette on Castle Street. This pair have been around for many years and in the past they have been worthy of their names – they also do look a bit like fridges with their grey monolithic facades. The Fridge is traditionally a male flat and the Fridgette a female flat (not sure if this is still the case, let me know).The Fridge features in the 2008 documentary, “Old, Cost and Costly: Sub-Standing Housing in Studentville,” when many Dunedin tenants were having issues with the state of their rental housing – just the usual: mice, mould, no insulation, holes in the roof. The occupants of The Fridge were pretty clear on the origin of the name, “It’s so cold . . . it’s called The Fridge”.