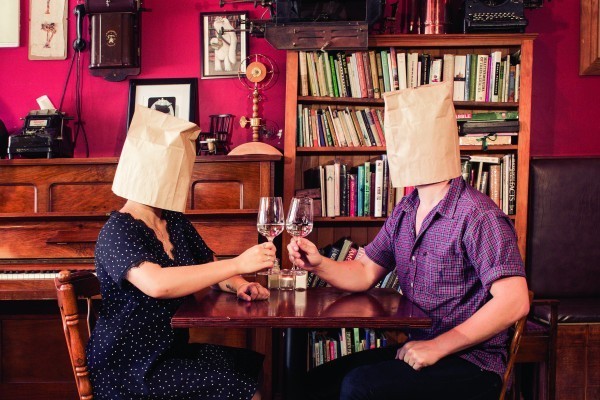 My night started off with me drinking scrumpy in my room as I got ready. I show up, the lady points me to my date and my first thought was, “thank God he’s attractive”. Nothing like a head of curls and a muscle-hugging white tee to get the juices flowing. Nice guy, we start talking and he mentions he’s not a big drinker as I order my second glass of wine and think back to the scrumpy I just drank – oops.

We keep talking and after ten times of us each asking, “what???” we realize we’re both literally screaming across the table at each other because the band was so damn loud. Then, not shitting you, the jazz guy informs the place that they’re gonna play an even louder one next. That’s when we left. On the walk home, I realise I forgot the bloke’s name. Too late to ask now, so I pull the whole “got Snapchat?” move. Bingo, first name in the username.

We go to a mate’s party together and ~romantically~ split the rest of my scrumpy in a red solo. We ran out of booze fast, so we went all Bonnie and Clyde on the place, stealing drinks left and right. You put your Little Fat Lamb down on the table? Thanks for the free drink, pal. We somehow ended up snapchatting the editor of Critic while at this party – hey Joel, thanks for the free shit.

After losing one too many pong games we head back to my flat and he helps me climb out my flat window so we can sit on the roof and keep drinking. Who said chivalry was dead? Turns out I’m a bad influence and now we’re both trashed. Next thing I know he’s stripping down to his undies and hopping in my bed. All I’ll say is that I woke up with my socks still on so you know it was a good night.

Being a keen reader of the blind date, I thought why not give it a crack. With a few casual emails exchanged to Critic, it was organised that I was to meet at the Dog With Two Tails at 8.30pm on a Thursday. Almost past my bedtime on a weekday but hey, for a $100 tab and the potential to find ‘the one’ I was as keen to go as a first year St Margs student is to get to the library.

In contrast to what seems like every other Critic date in the past, I went in sober and showed up early. With the intention of meeting a lovely lass, becoming friends first, leading to lovers and progressing into a full and happy life together, I allowed my mind to dream as much as a BCom student does when sleeping in their one lecture of the week.

Things started off very promising. In walked a beautiful blond who was calm and confident, the conversation relaxed and easy-going. The thought of a true friendship and a blossoming relationship flowed through me like the waters of the Leith on a peaceful March afternoon.

However, as happens with every HSFY student, my hopes were crushed as my date announced that she was an American exchange student and would only be in New Zealand for a few more months. With the extinguishing of the potential for a heartfelt, long-term bond between two, my intentions for the night changed. Gin and wine were ordered and the prospect of single night of fun was well on the cards.

With liquid courage building and the band finishing up, I took the offer of proceeding to an American flat party with my date. Provided with the tools that could turn a retirement home into the best Saturday night of your life (vodka, scrumpy and beer pong) my prospects were as high as a cow on a cannabis plantation.

0 from 3 at beer pong (shocking I know), we decided to call it a night. Conveniently, my date’s flat was two doors down, so with a leisurely stroll, followed by a drink on the roof we progressed to the place that had been on my mind the entire night. The fridge. Food consumed it was then on to the bed and yes for the readers that have been holding out for this there was some bump and grind flowed by a bit of a cuddle.

All in all I had a great night and though I will have to wait a little longer to find ‘the one’ I am more than happy to have nights like these in between.