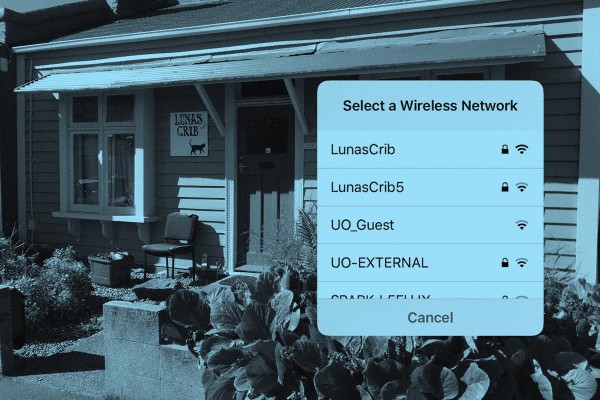 As long as student flats have been named, students have communicated their identity in a number of ways – in addition to hanging a shingle out the front of the house, that is. These means of identification go hand in hand with the communications technology of the time. Way back in 1991, I paid $50 a week for my room in a four person flat and spent a further $5 a week on stamps.  I wrote long letters to friends and family and received many letters in return, often addressed to me at my flat, Mouse House, 888 Cumberland Street. While my flat never had anything as fancy as branded stationery, flats from previous generations did. In the 1930s the residents of The Bach, at 208 Leith Street, designed a crest and motto and had a letterhead printed. The practice continued a generation later; in the 1960s and 1970s, flats called Che Choux and The Spanish Slum, also had letterheads. In the 1980s and 1990s there was a legendary flat, The Herm, which was so famous a postcard made it to the flat from South America addressed simply to, “The Herm, Dunedin, New Zealand.”

Back in the heady days of the 1960s the tricksy thing to do was sneak your flat name into the telephone book – not an easy feat as only personal names were permitted for free. This didn’t stop the med students who flatted at Smersh HQ on Cumberland Street. An ex-flattie revealed, “It was relatively simple to get your flat into the phone book. We calmly told the little man at the post office that the surname was Smersh and the first name was Harold Quentin. No problems”.

In the 1990s, Telecom’s name numbers became popular – handy if you couldn’t remember a string of numbers. Moe’s on Clyde Street registered their phone number as 477 MOES.

Today, some flats have their WiFi name match their flat name, or something else that may be amusing.

It is interesting to see the shift in personalisation of communication forms from a hard copy print environment to digital – from email, to social media where platforms like Facebook suddenly make it very easy to stay in touch with many people simultaneously. Where once students went to the extent to have letterheads designed and printed for their flats, today’s students set up a Facebook page or name their WiFi hotspot for their flat. It certainly makes strolling down any street in North Dunedin and scanning for WiFi an entertaining pastime.