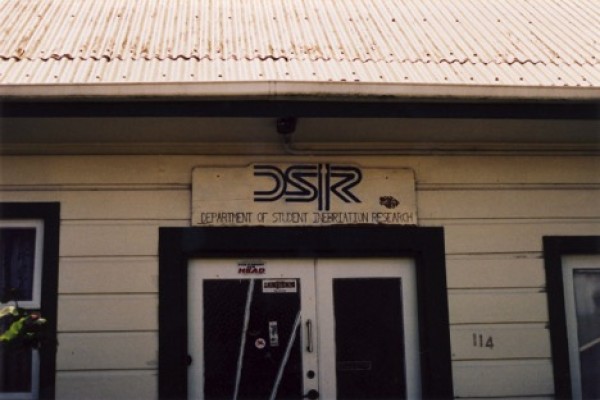 Dunedin Flat Names Project | Being Something You’re Not

Flats with names like Dunedin Police Department, Department of Corrections, and Bed and Breakfast, had homemade signs and were obviously not what they claimed to be. Sometimes signs, like Dunedin Casino or the Glenorchy Tavern or Speight’s, have been “acquired”. There are a couple of flats that have taller tales to tell however.

The Department of Slavonic Studies was situated in a villa on St David Street in 1972 where St David lecture theatre now stands. It received its moniker from the flatties who were all of Eastern European extraction.. Rumour has it they were investigated by the NZSIS for being part of some communist conspiracy, however an OIA request revealed nothing untoward. The flat was visited once by the Polish consul at the time who, on questioning the role of the Department, was informed that they were only informally associated with the University.

In the late 1990s, 96ZM, a local radio station, held a competition which caught the imagination of many students in Dunedin – the idea was to name your flat and there would be various worthwhile prizes up for grabs. The flatties at 114 Union Street named their flat DSIR – a familiar logo in the New Zealand collective consciousness during the 20th century. The Department of Scientific and Industrial Research was established by the government in 1926, and later became a Crown Research Institute. Of course 114 Union Street’s sign was not what it appeared, it was actually an acronym for Department of Student Inebriation Research – they made a stencil and used this to decorate a sawn-off headboard from a single bed, painted in the DSIR colours. It was very convincing. One of the flatties, Tijs Robinson, remembers, “My girlfriend’s dad worked for the actual DSIR so [it was] a clever play on the well known organisation. Ironically, two of us went on to work for IRL (who came out of DSIR) once we graduated!”

As with many flat names at the time, and since, it made reference to alcohol consumption. The flatties were truly committed to their flat name which won the R21 category of the 96ZM competition and $1000 to spend at The Bowler (back in the day when you had to be 21 to drink legally in NZ and when The Bowler was still a student pub and not the Bioethics Centre). Not only did the lads from DSIR create a great sign, but they totally leveled up by branding their lab coats and painting the door of their car to match. Like the Department of Slavonic Studies, DSIR managed to bamboozle a visiting dignitary. One day they received a knock on the door and guess what? There was a visiting academic enquiring as to the nature of their research.