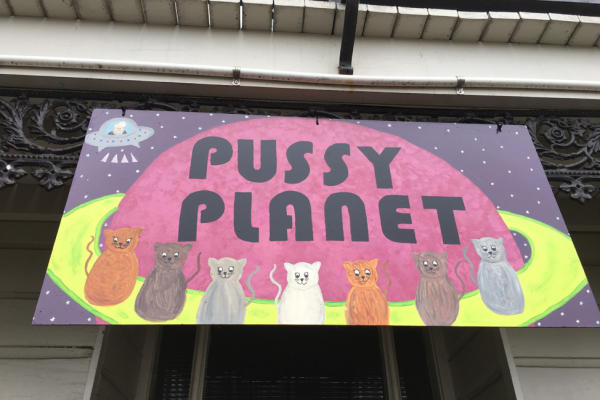 Not far from the 24 hour dairy on George Street stands a large two storey weatherboard house that has been converted to a 7 bedroom flat. For many years it has had a name, possibly as long as a decade, but last year’s residents made what may be its very first sign. Of the more than 500 verified named flats in North Dunedin, it’s hard to know how many have been named but have never had a sign. Usually I’m able to verify names through email or Facebook, sometimes through Google Street View or through videos and photos that have been shared online. In this instance the name was revealed to the residents in fairly unusual circumstances, by a garden gnome. When the flatties moved into the flat in 2017 and discovered the gnome in the garden with “Pussy Planet” inscribed on it, they saw it as a sign from the universe.

Alumni of Selwyn College, where every student has a gnome in their room, the flatties’ curiosity was aroused. They thoroughly inspected the gnome and discovered a student’s name was written inside it. A quick search on Facebook revealed this (male) student had also been a resident at Selwyn, and was a tenant of the flat in 2015.

For those not inducted into the mysteries of Selwyn College, gnomes allegedly embody the spirit of the College and have been known to be ‘liberated’ from gardens by Selwyn students. Selwyn and Knox have had a bit of friendly rivalry over the years and historically Knox students have been known for the practice of  gnoming – that is, capturing Selwyn’s gnomes. The origin, extent and deeper workings of this mysterious tradition is unknown.

The origins of the name Pussy Planet aren’t entirely clear either, but the sign created by the 2017 residents indicates it’s about cats in space. Or space cats. Or maybe spaced-out cats. Hard to know. The flatties said, “We thought it was pretty cool we’d signed a named flat, but we thought it was sad it didn’t have a sign, so we made a one before class started. It’s pretty girly, but we are quite fond of it. We also thought a named flat had to have a bit more tradition to it, so we decided to host a flat ball — “The Pussy Planet Prom” — and we hope next year’s tenants also keep that going too."

The sign remained with the flat, and they repainted the gnome in Selwyn colours and left it on the property for the 2018 tenants to find.