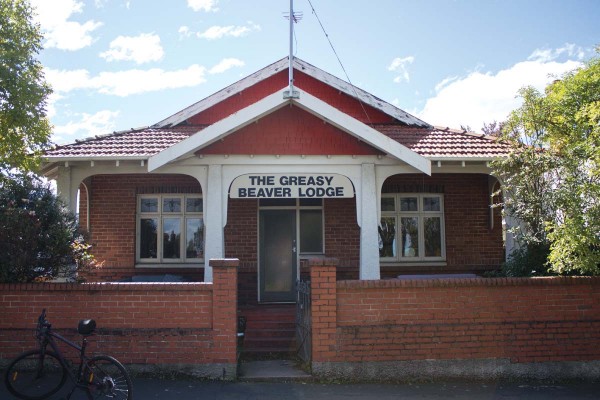 There is a prevalent sexual theme running through the history of Dunedin’s named flats, though on analysis it is a minority. No doubt the thematic vein of possibilities has not been thoroughly mined.

The sexual references in flat names tend broadly to people’s bits, things related to those bits, doing things with those bits with other people’s bits, and pronouncing the flat as a venue where one could expect this kind of desirous activity could take place. But listen up, one must never assume, “no means no, a kiss is not a contract,” and neither is a sign over your door (e.g. The Slut Box, Hoe-tel, The Brothel, Route 69, The Palace of Phallus).

Sometimes there’s a bit of clever innuendo, double entendre or rhythmic rhyming in sex-related flat names, like The Cock and Swallow or Frottage Cottage, but more often than not, it’s really quite obvious what the name implies. One clear intersection with some names is references to alcohol, such as with Libidoes Bar and Grill, or Dicken’s Cider House. In other cases it’s also the materials used to create the sign that add to the story – bed heads are good for this and have been used in a few flats like Bedrock and The Changing Rooms.

On occasion names have caused offence to members of the campus community and the public – the Cuntry Club and Bird Watchers come to mind.

Scott Eady arrived in Dunedin in 2002 to take up the Frances Hodgkins Fellowship that year, and on his way into town, he was greeted by a host of ripe signs hanging out on student flats. First horrified, then deeply amused, these names became the muse for his Fellowship. Eady’s work, exhibited under the title “Signs,” deliberately highlighted the more attention grabbing flat names that were around North Dunedin at the time. To further highlight, and in some cases, illuminate, their fairly blatant sexual messages and notions of masculinity, he rebuilt the homemade signs on a grand scale, using commercial materials and sometimes neon, to draw attention to the name and what it implied.

One of his most impressive interpretations was that of “The Greasy Beaver Lodge,” a huge illuminated sign in a steel frame accompanied by a larger polyester resin beaver. The sculptural work is part of the Hocken Collections and, in 2016, was part of the exhibition “Undreamed of .… 50 years of the Frances Hodgkins Fellowship”. The Greasy Beaver Lodge will live on in the record of New Zealand’s art history, one of the many named flats in Dunedin that inspired the artist’s Fellowship. In April 2016 the name reappeared after a more than 10 year hiatus – check it out on the corner of Dundas and Great King Streets.