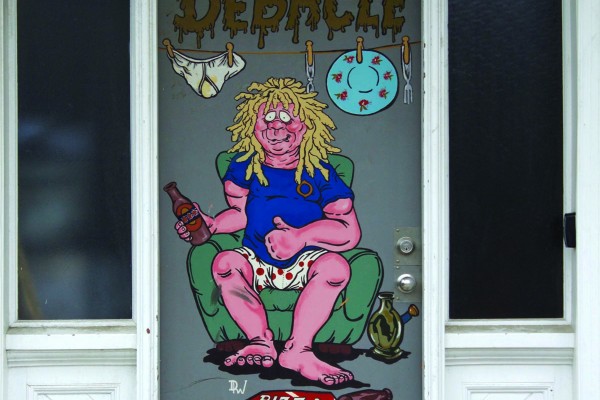 The Flat Names Project | The Debacle

The arrival of students at the beginning of each academic year brings a frisson of excitement to the city, which used to culminate in a toga parade so that, as former OUSA general manager told the ODT, “the community and students could meet and greet each other in a colourful way”. This intersection of town and gown met a sticky, smelly, and violent end in early 2009.

Wandering down Cumberland Street today, you can see a vividly painted door depicting a student in boxer shorts, seated on a green chair, holding a stubbie of beer and flanked by a bong. In the foreground sits an unopened pizza box on the floor. Above and behind the student’s head hangs a washing line, bedecked with y-fronts, a plate, fork and knife. The word ‘Debacle’ is emblazoned above in what can only be described as a colour and texture reminiscent of bodily expulsions. It’s the kind of scene some imagine as a typical student flat. Interestingly, the story behind the name is quite different.

The OUSA Toga Parade down George Street on the 24th February 2009 deteriorated into bedlam which resulted in injury to people and property. The Otago Daily Times (25 February 2009) reported: “As the large mass of students moved into George Street, hundreds of eggs, bottles, rubbish, and buckets full of vomit and faeces, were thrown from first-floor verandas and alleyways, as well as at shop frontages.”

A number of students were disciplined for their involvement. OUSA decided to cease future parades and the newly appointed Critic Editor for 2009, Amy Joseph, let rip in an ODT opinion piece, declaring in no uncertain terms that the behaviour exhibited at the toga parade was not the “Otago way”.

Teige O’Sullivan and Ben Thomson were first years in 2009 and experienced the parade first hand. Ben said, “[We] got pelted with eggs, fruit, human faeces and everything in between”. In 2010 Teige and Ben took on the lease of the Cumberland Street flat with seven other male students. They renamed it “The Debacle,” which was exactly how US Associated Press reporter Ed Donahue described the Otago Toga Parade.

For more, visit the Dunedin Flat Names Project at www.dunedinflatnames.co.nz