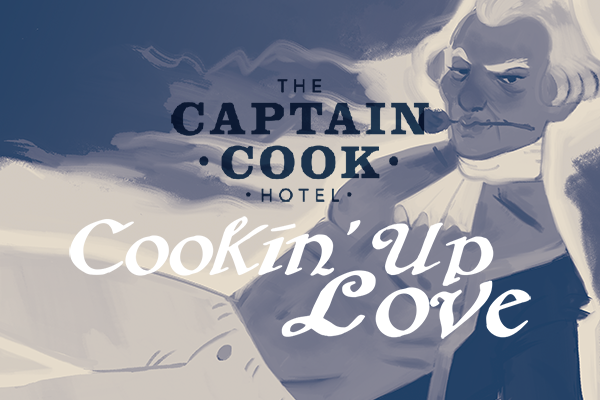 I never thought I’d go on the Critic blind date but when the call went out for LGBTQ volunteers I decided to take the plunge! I was super excited until about four hours before I was due at the Cook, when I realized that for an introvert such as myself the idea of spending several hours one-on-one with someone you’ve never met before is completely terrifying – small talk is my kryptonite. To calm the nerves my flatmate and I drank a bottle of Lindauer and I cut my nails (you never know, right?). I showed up to the Cook a few minutes early - I’m incapable of being late - and solidly tipsy. The staff asked for my name and said they’d tell him when he showed up, lol. A few minutes later my date arrived, a very pretty blonde. The wine definitely made conversation easier, we started chatting straight away and had to be asked numerous times what we wanted to eat and drink because we were too busy talking to look at the menu. My memories are more than a little fuzzy but I remember the conversation was so interesting and varied – philosophy, TV shows, in-vitro fertilization, our hometowns, Dunedin winters, and a mutual love of chickpeas and lamentation of limited vegetarian options at restaurants (have you ever met a lesbian who wasn’t a vegetarian? I haven’t). We stayed until closing time and then decided to head into the Octagon – my date had never been to Carousel, an absolute travesty. Upon arrival we realized it was closed but Albar was still going and when we went inside we were greeted by a full Irish band, complete with flute, accordion, and several fiddles. We got a pint each and by that stage I think we were both pretty sloshed so we talked a bit but mostly just enjoyed the lovely music and held hands. When Albar closed we walked back to hers with our arms around each other’s waists and enjoyed a cup of tea in her living room. We shared some very sweet kisses and I was home by 2am. The next morning I woke up to a message from her checking I got home safe and saying what a lovely time she had – a very mutual feeling! Cheers to Critic and the Cook for hosting us, and my date for a truly wonderful evening.

At 6.40pm, I was sitting on my friend’s bed, feeling like I was going to throw up. I had drunk wine way too fast and was so nervous I wanted to curl myself up into the tiniest ball and cease to exist.

At 6.58pm, I was walking to the Cook and regretting every decision that Ied me to this position in my life.

At 7:04pm, I was sitting across from a girl with curly brown hair and a flickering smile, and, suddenly, I was okay.

Honestly, I think in some strange way my brain decided: 'well, there’s no escaping now, so you might as well have full control of your mind back'. And as it turns out my worries were wasted. My date was immediately kind and chatty. I admired her passion for her degree and her ability to break down her thesis concepts to their most basic levels so I could understand. It was so cool to walk into a situation as strangers and walk out as, well, not strangers.

The Cook slowly emptied, and luckily my date was a lot better at decision making than me because I wanted to go ‘somewhere’, which not particularly helpful. She suggested Albar.

In the most screen worthy of moments, she warned me that Albar was ‘very Irish’, before pushing open the door into the middle of a live Irish folk jam sesh. Sliding into a booth we laughed at the sheer unlikelihood of selecting a bar that had twelve people absolutely killing it on the fiddle, harp, accordion and flute. My date very chivalrously bought me a drink and we held hands, not really talking, but listening to the music.

Tipsily we walked out of town towards our flats and kissed in the streetlight outside of my house. We made some tea at my flat and she met one of my flatmates who was slightly confused and very pajamaed. I also discovered that by strange coincidence, she had been a model for a life drawing class every semester apart from the one I had attended last year.

At 1am, she left, and like the idiot I can be, I just let her go, without thinking about how she’d get home, so she had to call her flatmate for a lift (I’m so sorry!).

Thanks Critic. We’re seeing each other again this Saturday, so we’ll see how it goes!!