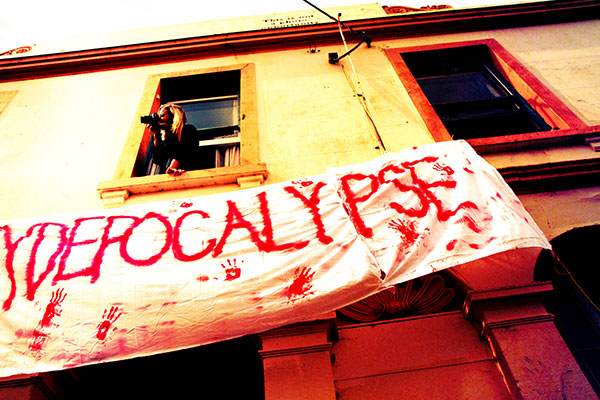 Hyde was a Hoot! The Hoot that was Hyde

Last week we held a competition for you to choose which Hyde Street photo would make the cover of Critic. You went nuts. I tried to rig it by putting my favourite four photos at the start of the album but, no, you social media whizzkids could not be fooled.

It’s time everyone got better taste though. By a mile, the photo with the guy who wore a bra and had a teddy strapped on facing his man parts had the most likes. But there was no way I was putting that on the cover of this classy mag. Seriously, people? A lot of students, believe it or not, haven’t seen that classic, 21 & Over, so a teddy bear stuffed down someone’s pants would be rather disturbing to the small children in town who occasionally see Critic lying about.

And that poor guy is probably wondering, “Why is there a teddy bear glued to my penis?”

But he did look like he was having fun. Almost as much fun as the rest of us on Hyde. Aside from the idiots who got themselves arrested, it was a bloody great day. Everyone I spoke to seemed to be having a whale of a time, and every year the event gets safer and more organised. It’s a shame the media (yes, you ODT) decide to focus on the shit side of it all too often. Of course the police are never going to encourage a party where everyone gets pretty white girl wastey, but I spoke to a lot of cops that day and they all seemed happy. At one of last year’s rugby sevens matches, there were 20 arrests and 270 people removed from the stadium. See? There are morons everywhere — no need to paint the whole student population with a tainted image.

The point of the police giving the party a bad rap is to make OUSA, and the others involved in organising it, rethink how they might make it even better next year. One idea I’ve already heard has been bringing the kegs back to Hyde and not allowing any other alcohol — that could actually be an awesome idea (providing supply met demand, of course!). Another idea is to not let those who are at an incomprehensible level of drunk into the event. That’s the process for a party anywhere else.

What’s worse is when you see TV news reporters using footage from previous years to show everyone what a ruckus bunch we apparently are. That’s not even journalism — it’s a historical documentary.