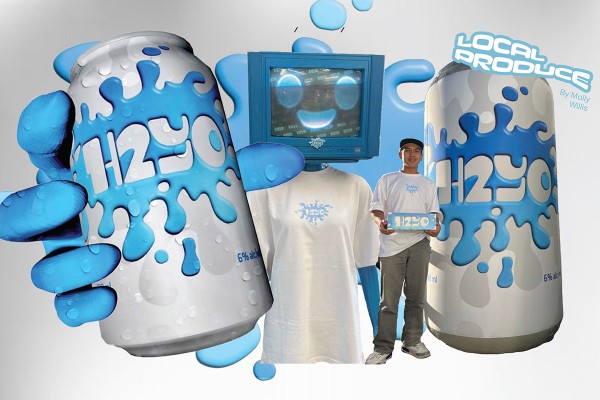 With plans to hydrate the world one liquor store at a time, Dunedin locals Anthony Tep, Silas Kemp, Tom Gallagher and Riley Coughlin kicked off the launch of their RTD brand H2yo on Friday the 13th of May at Leith Liquor.

H2yo BLUE is a 5-ingredient alcoholic beverage that mimics the taste and texture of still, flavoured water. Anthony said the idea came to him after a game of basketball. “I was handed another RTD and thought, ‘sheeeesh, this is not what I want right now’.”  After spitballing ideas with his mates, they embarked on a trip to Leith Liquor and the produce section of the supermarket to begin creating the first flavours for H2yo. After this moment, Anthony said the vision was really straightforward. “From day one, we were pretty much all on the same page on what H2yo was going to look like.”

To get the business started, Anthony relied on his weekly pay from his current job to buy the ingredients he needed to create sample formulas. “Starting with pretty much zero capital was really difficult,” he said. “From here, getting people to believe in the vision and bat for me was hard. The amount of times I was told that H2yo wouldn’t work is uncanny… I have pitched the idea more times than I’ve had birthdays. I am really lucky that my investors took a massive risk on me and provided me with the seed funding I required.” Taking risks in business is something H2yo is familiar with at this point, and Anthony credited his “extremely talented mentor” for helping him get his head around the business model, production and logistics. “If I could give any advice to somebody looking at starting their own thing… make connections now! It might be cliché, but it’s literally ‘not what you know, but who you know’,” he said.

Anthony said H2yo are focussed right now on “watering our own garden”.  With all four members also part of local record company ‘Garbage Records’, H2yo have relied on the industry skill of friends and others close to them. Riley Coughlin is the creative director and takes the lead on brand visuals, with his distinct 3D grunge style. “I entrusted him to brand H2yo however he wanted,” Anthony said. Silas Kemp came up with the original concept of H2yo’s iconic splash logo and the logo on the box. He is also in charge of all of the in-store displays and was responsible for the mannequin in Leith Liquor on launch day.

Anthony said that “eventually we do plan on expanding to the rest of the country.” This includes creating collaborations and merchandise “in a way an alcohol company has never done before”. In this endeavour to expand the H2yo universe, Anthony credits his good friend Ethan Cruise, a fashion student at the Otago Polytechnic, with the first run of merch H2yo created for their launch. “Ethan spent a lot of time printing all of those t-shirts we gave away on launch day! Shout out Ethan man!”

In a market dominated by conglomerates and corporations, H2yo are keen to use their brand to create meaningful impact. “Once we have a bit more firepower, we plan to introduce our ‘Hydrate the World’ initiative,” Anthony said. “My family come from a third world country and would not be here today if it wasn’t for the organisations that helped them in getting here during the Khmer Rouge. So if we get in a position where we can facilitate this initiative, we plan on putting in water pumps and filtration systems in third world countries. Silas’s family have already been doing this over the years, so we would love to help out with this.”

Stay tuned with what H2yo are up to next via their Instagram @h2yo_nz, or over on their website (where you can also cop some merch), h2yo.nz.