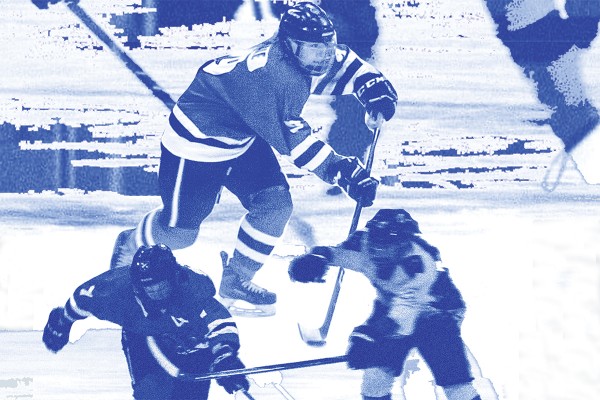 Fringe Sports for a Fringe Town

Many students have grown tired of dragging themselves to Unipol and have instead taken up one of the many “new” sports that have become increasingly popular and accessible in the last two years. Critic talked to people involved in these rising stars of the Dunedin sports scene to find out why bouldering, disc golf, and women’s ice hockey are some of the fastest growing activities in the city, and how you too can ditch the monotony of the gym for a more engaging workout.

Bouldering involves climbing on small rock formations (2-10m high), or artificial walls, without any ropes or harnesses. People have been doing it for as long as we’ve looked up at boulders and decided we wanted to be at the top of them, but with the opening of a new climbing gym on Moray Place in 2021 and the debut of climbing as a sport at last year’s Olympics, more students than ever are giving bouldering a go.

David Sheppard is the climbing officer of the Otago University Tramping Club and has been climbing for over ten years “from the world stage in Italy, high up on Moir’s Mate in Fiordland and to our local crag at Long Beach”. David describes bouldering as “an independent challenge, just you and the wall”, adding that when you finish a climb “there are an endless number of new routes to try with different styles and difficulties, you can never get bored.”

David says that the bouldering gym that used to exist in Dunedin would often be empty, but nowadays at Resistance Climbing there is “always a handful of people and it’s especially busy during the evenings”. He attributes this to climbing’s inclusion in the Tokyo Olympic Games, and to the new gym being welcoming to both experts and beginners.

Arlo, a second-year student, and Zak, a third-year student, have both been bouldering for less than a year. They agree that having a local climbing gym has made the sport far more accessible to beginners. Arlo believes that despite being very physical, it often doesn’t feel like exercise simply “because it's so fun”. Zak also thought that the grading system “really helps track improvement as you progress”.

David believes that climbing is “going from a fringe sport to more in the mainstream”. Zak and Arlo also told Critic that as more people convince their friends to give it a go, and those friends convince their friends, the sport will continue to grow in popularity, with Zak adding that “you’ll be very sore but it’s worth it.”

While a disc golf course has existed in Dunedin since 2015, a student club dedicated to the sport was only formed last year. Modern disc golf emerged in the ’60s when students from universities across the US started throwing frisbees at targets in their local parks, including trees, rubbish bins, and presumably each other after they’d had a few drinks. The first official disc golf course in Aotearoa was opened in 1996 in Queenstown and with grants from the rotary club and the council, the Chingford Park Disc Golf Course opened in North East Valley in 2015. The move was indicative of the growing number of people interested in disc golf in the city seven years ago, but Keegan Wells, President of the Otago University Disc Golf Club (OUDGC), says the sport is growing “now more than ever before”.

OUDGC was formed in January 2021, and Keegan describes fellow student Matt Watson as “the driving force” behind the club’s formation. Keegan was new to the sport at the time, but became Vice-President in the club’s first year before being elected president for 2022. Keegan reckons the best things about the sport are its accessibility and sociability. “Getting out into the green park for just 45 minutes a day is not difficult at all, it's not a huge commitment like other sports where you have to play tournaments in Christchurch. Thus making it incredibly accessible to heaps of people.”

Finella O’Leary, who is in charge of the club’s social media, describes disc golf as “a great way to meet new people, get out of the house and have a break from studying”. Finella said her favourite thing about the sport was “can-a-hole on a Saturday arvo”, referring to a version of the game where players sink a can of booze after each hole. She sees the sport overtaking golf in the next five years, with golf courses being turned into parks “where holes are converted to chain baskets and tees are converted to... well, tees may stay the same.”

While it may not overtake traditional golf anytime soon, the sport is certainly increasing in popularity in Dunedin. According to Keegan, “more people are playing the courses, buying their own discs and getting councils to set up official courses”. A new course at Brockville Park, out near Kaikorai Valley, will hopefully attract even more new students to the sport. “I think disc golf is going to continuously grow all over New Zealand and at the Uni specifically.”

Ice hockey is arguably one of the oldest sports in the Otago region, having been played here for around 80 years. And yet, until two years ago, Dunedin didn’t have a women’s team, and any women wanting to tear it up on the ice had to join the Southern Storm, which had players from all across Otago and could mean travelling four hours for training. It is the only local women’s league in the country.

Angelique Mawson, who has represented New Zealand in ice hockey for a decade, as a player and then as an assistant coach, is the manager of the women’s league in Dunedin. She says that the decision to form a women’s team just for Dunedin was a natural one. In addition to the logistical nightmare of organising a team across multiple cities, “the numbers in Dunedin were growing for women's hockey.” The Dunedin Thunder women’s team was officially created in 2020, giving even more incentive for local women to pick up the sport, and Angelique says it is “quickly growing and gaining a lot of new players”.

“Now's the prime for girls to join,” says Rina Watt, who is an Otago Uni student, assistant captain for the Dunedin Thunder and a player on the national team, the Ice Fernz. “The NZ Ice Hockey Federation is really looking to promote more growth for younger girls so there's a lot of hype.” Rina has been playing ice hockey for 13 years, and reckons the Dunedin Thunder have a “great team culture”, saying that they are “a strong team with a great range of ages and strengths, so we all bring something different to the team.”

Angelique says Covid-19 has made playing internationally difficult, and that it might be hard for the national teams to “regain the momentum” they had before the pandemic. However, she’s proud of the growth the sport has seen locally, particularly with the women’s league where multiple clubs can play against one another within Dunedin. Their annual “Give it a Go Day” is also popular, providing an opportunity for women (and any other) newcomers to take to the ice and try this exciting sport for themselves.