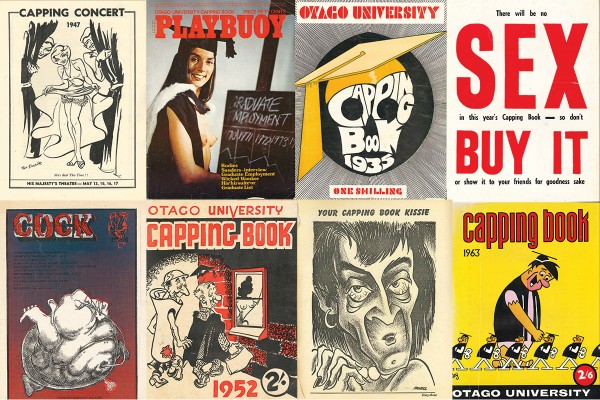 Chunder, Challenges, and Controversy: A look back at Otago’s debaucherous Capping Week

Not so long ago, in the 1950s, students at Otago would have been in the middle of intense party preparations at this time of year. Throughout most of the 20th Century, May graduations (known as Capping) were celebrated with a week of festivities including social events, stunts, and extreme binge drinking. In the early days, lectures were cancelled for the week because the Uni knew that no one would show up.

All that remains of the week for us today is the Capping Show, but Capping Week used to rival O Week. Instead of just having a disappointing fresher toga party in the Union Hall, the Capping Committee hosted a variety of events all week long, for everyone to attend. This is a catalogue of all the events that would have been on show for you if you attended Otago in the mid-20th century. Not that you would have been sober enough to remember many of them.

These were the people that organised the social events. The committee was described as looking like a “rugby convention” rather than a group that should be in charge of spending thousands in OUSA funds. Even in the ’70s, the committee faced problems with increasing amounts of internal assessment at the University which were “slowly killing a 100-year tradition because people simply had less and less time to get involved”.

The booze budget for Capping Week was $1000 in 1972 (or about $14,000 adjusted for inflation, probably more if you account for the relatively cheaper price of alcohol). This escalated to around $3500–$4000 in 1982 (a fuckton of money). In 1983 the OUSA Exec made the decision that this budget was far too much for anyone to possibly drink, and cracked down on it. In a desperate attempt to preserve their way of life, the Capping Committee motioned no confidence in the Exec at a student meeting. They lost the vote, the booze budget was reduced and the Capping Committee became less popular.

The Kapping Kid was some unfortunate fresher, chosen for unknown reasons, who got dunked in the Leith. In 1966, Critic wrote that the Kapping Kid “was baptised last Friday (guess where? Hee).”

The drinking horn was the opening event for Capping Week. It usually occurred on the first Sunday of May. One observer described it as a “series of feats of dubious drinking prowess splattered by the occasional indiscretion.” There were a variety of loosely competitive challenges, for example a bike race and a raft race, which centred around drinking substantial quantities of alcohol. In 1975 students tried to recreate the Bavarian Beer Festival by “disposing of 300 gallons [1400 litres] of beer,” in a notorious event that was both hated and admired by the Capping Committees in years to come. That same year the Leith raft race challenge was championed as “an opportunity to sink piss in a serene setting with your mates.”

An issue of Critic invited spectators of a bicycle race up the Leith to “come along and bomb the bastards and have a generally satisfying time.” Unsurprisingly in 1977 it was noted that “the cultural side of Capping seems to be diminishing and the boozy side seems to be growing.” Although the drinking horn no longer exists in relation to Capping, it is possible that common Dunedin pastimes such as red-cards and day-drinking in public spaces simply reflect a cultural evolution of the drinking horn, where students would do challenges and drink.

The ‘stunts extravaganza’ would occur on the Thursday of Capping Week, but minor stunts would occur throughout the Capping Week. In 1964, two prizes were awarded for the stunt that gained the most publicity, and the stunt that raised the most amount of money for charity. The stunts were like Relay for Life in terms of fundraising, but involved outrageous, attention-grabbing activities that might be illegal instead of running around the clocktower. Stunts seemed to mainly involve students being menaces around campus and disrupting lectures. One Critic mentions a few ideas such as “beating the water speed record for a coffin” and “beating the world record for the destruction of a piano so the pieces can be passed through a toilet seat.”

From the ’40s to the ’60s, Capping Week included a beauty pageant. The student body voted for Miss University, and the final contest was judged by a panel of experts the day before the Capping Ball. Miss University seems to be similar to the idea of an American homecoming queen because the winner was “guest of honour at the Capping Ball” and received prizes that included a 20 pound (~$700) clothes prize, free meals and privileges around campus. The origins of the Miss University competition are unknown, it existed before 1964 and was an immensely popular competition while it ran.

A 1965 final drew in a crowd of over 1600 punters, with a Critic reporter lamenting that this was the most popular event of Capping Week. The 1965 rules stated “entrants will be judged on their grace, grooming, poise, personality and dress sense.” A 1966 reporter noted that: “A few cruds uttered wolf whistles at first, of course, but they soon gave up.” In 1971 the contest had morphed into a Miss Uni drag competition, which sounds like way more fun.

Three wool-store hops were held throughout Capping Week with the big one going off on the Saturday night. The hops were introduced in the ’40s, when the student body became too large and rowdy to be contained in a normal building. Wool stores were booked out as all-weather, virtually indestructible venues for piss-ups. People would sit around on wool bales, drink, and boogy while consuming large amounts of alcohol. There was usually live music and in the ’70s Split Enz even played one of the gigs.

Procesh (procession) was a short parade from the University to Logan Park on the Monday of Capping Week. Freshers, hostels and university faculty would construct floats for the parade and “beg, bludge, scrounge and squeeze from the public, as much money as possible.” Members of the City Council and the Police would judge the best floats. Most of the students before the parade would “substantially fortify themselves internally.”

In 1964 the new police superintendent G. W. Alty caused an uproar when he threatened to actually enforce alcohol licensing laws around Dunedin. Critic dramatically stated: “Capping stands in jeopardy. Superintendent Alty will rigidly enforce our Victoria-era drinking laws … Concerts and hops will be sober and sombre affairs and the life will be torn out of procesh.” This didn’t last though. By 1968 Alty was issuing a desperate plea that students “refrain from knocking off policemen’s helmets during the procession.”

Mysterious. Little known information, other than presumably involving alcohol consumption and chundering while running a mile. The Chunder Mile was banned in 1972 because of the dangers of “asphyxiation” and “ruptured esophaguses.”

As the 20th century went on, it became more of a magazine. Both were controversial, satirically described as “outrageous to upholders of conventional sexual morality.” Meek, the Capping Magazine Editor in 1970, said “[w]ithout trying to blow our horns, I consider this is nowhere near gutter journalism — it’s merely tasteful obscenity.”

The Capping Magazine constantly struggled with censorship because it contained racist and sexist content. This came to head in 1981 with the publication of Thrust, which featured a cover image of a clock tower penis rocket launching towards a woman’s vagina. The posters for the magazine were stickered with the words “this is violent rape” by feminist groups on campus, and OUSA made changes to make sure that women were more represented in the magazine.

Held on the Friday night, the ball was the most classy event of Capping Week. Everyone just got dressed up and had a good boogie while being slightly less intoxicated than they were the rest of the week.

This is the only part of the Capping Week that remains. It was originally known as the Capping Carnival. Originally, the show was mainly men performing on stage, with “farces” (skits) performed by Selwyn and Knox College students. The notorious Selwyn Ballet began in Capping Show.

Like the rest of Capping Week, the show struggled with students’ commitment to exams. In 1939, the Capping Controller (director) implored students to participate and make the show fun. He said that the question was whether “the show should be a student riot, as in past years, or else a school concert with plays and items, and we presume, recitations”.

In 1972 Critic editor accused the show of being “full of naughty, behind hand grot humour.” In 1974 it got quite trippy. Everyone was definitely on acid, and it was described as an “expression workshop” by its organisers. The organiser describes it as “out of sight oh … wow.”  Remember, those hippies are boomers now.

In 2001, OUSA President Ayesha Verrall noted the shift away from the raucousness and large scale of the 20th century Capping Week. Graduates now “politely toddle across the stage and out of Dunedin, capped, qualified and indebted,” Verrall said, with no Procesh or woolstore hops to look forward to. This can be put down to increases in mid-terms and assignments during May, and the resulting student apathy to go on a week-long bender before a 40% test.

Some changes are for the better. Capping is no longer plagued by racism and sexism. But it has lost a sense of community, where students celebrate graduation as the biggest event of the University year and the goal that we’re all working towards. So if you find yourself needing an excuse to daydrink in the middle of May, remember, it’s a tradition that has been going on for over 100 years.