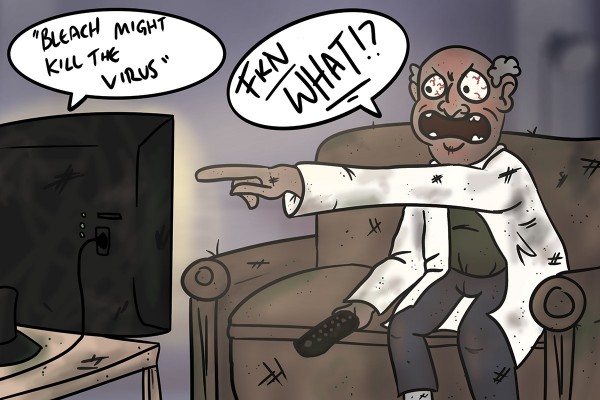 Mythbusting: Academics take a crack at misconceptions in their field

It’s really easy to pretend that you know what you’re talking about. We know this because at Critic we’ve been calling ourselves “journalists” for nearly 100 years.

Not being a scientist doesn’t stop people from getting on TV and filling a scientist’s shoes. “I’m not a scientist, but ...” sounds a lot like “I don’t really know what I’m talking about, but here’s a wild suggestion based on speculation.”

Every time a clueless authority figure makes a dumb suggestion, an academic somewhere in the world pulls their hair out. Imagine the reaction of a microbiologist when, totally hypothetically, a world leader suggests something dumb like injecting yourself with bleach to kill a virus. Not that that would ever happen. Nobody’s that fucking dumb, right?

It’s like when your dad yells at the sportsfolk on the TV who dropped the game-ball. “Who let you on the bloody team,” he shouts, “I could do so much better!” Except in the case of science and misinformation, the experts really can do so much better.

So Critic door-knocked random academics around campus to ask them about misconceptions in the media. We wanted to know what bits of misinformation or pseudoscience they see presented as fact, and give them an opportunity to set the record straight. Here’s what they had to say.

“Africa is not a country,” said Tony patiently. He has explained this to more adults than he probably should have had to. Tony teaches a second and third-year class on development trajectories in Africa, and it irritates him when “people come into this class, or any discussion, with preconceived notions of what ‘all of Africa’ somehow is.”

There are 54 countries in Africa and even though we all have an atlas in our pocket, some people don’t seem to understand how huge the continent really is. It’s impossible to generalise, but “we see it all the time,” said Tony.

Back when Ebola was going around, Tony hosted a conference in Dunedin about African history. A university employee, who was helping to organize the event, called Tony and asked him if anybody was going to be attending this conference (a conference on African history) “from Africa”. They thought somehow the entire continent was overrun with Ebola.

Botany: Somebody who was very busy that we bumped into, Herbal Supplements

Botany firmly stated that there was “plenty” to talk about when it comes to herbal supplements, but didn’t have time for an interview. Apparently someone in the science communication department skulled a bottle of them before giving a lecture to see if it would have any adverse effects on his body, like “real medicine” would. He’s still lecturing, so apparently nothing happened.

“Well, we could talk about climate change,” offered Ceridwen. Climate denial is frustrating and ridiculous, and Ceridwen identified a broader misunderstanding of science as part of the reason. “Science isn’t something that you can choose not to believe in,” she explained, “it’s not a religion. If someone says to me ‘I don’t believe what you’re saying’, I’d say ‘go ahead and test against it.’ Science welcomes new evidence and challenges.”

“But with climate change, overwhelmingly, the more evidence we get, the more sure we are of the warming trends,” she asserted. Ceridwen then highlighted a common misconception that she hears in the media. “People often don’t seem to grasp what a 2­–6 degree rise in temperature, within this century, really means,” she explained.

People may say “well, it’s ten degrees warmer now than it was this morning, so who cares,” said Ceridwen, “but 2-6 degrees is a global average. If you look back in time, the last ice age was only an average of about six degrees celsius colder than now.”

During that time, because it was six degrees colder, lots of ocean water became locked in massive glaciers on land, so sea levels were about 120 meters lower than today. Dramatic changes to Earth’s climate, explained Ceridwen, “don’t take much”, and a few degrees can make an enormous difference to our world.

“The evolution vs creationism debate is still alive,” explained Gerry. In a class of 300 people, he would expect that maybe one or two of them would subscribe to “a more literal understanding of the bible.” He explained that this view is problematic because it puts humans at the centre of the natural world, and that “you never have to go looking very far” to find the belief, he said, even in a biology classroom.

Gerry is frustrated by the narrative that human beings are somehow at the top of the natural pyramid, and are therefore allowed to treat the planet as we wish, with little regard for the ecosystems already in place. Our impact on the environment is often downplayed by large interests such as agriculture, who have something to gain from exploiting our environment.

“Also”, he added, “sharks aren’t as dangerous as they’re made out to be” The danger of animals is often overstated. Gerry cited the old shark nets off St Claire as an example of our misplaced paranoia.

“The phase of the moon does not influence major earthquakes,” explained Mark. “Some people seem to believe that you can predict earthquakes based on when the moon is full,” he said, “which is really far fetched.”

Predicting earthquakes is about “determining exactly how big, exactly where, and exactly when”, and it is impossible. If anybody could do it, Mark would probably know them personally, and he does not. Still, the fact that you cannot predict earthquakes has not stopped people from saying they can “predict earthquakes”.

Mark cited Christchurch’s “Moon Man” as a particularly memorable individual. His false claims of impending doom during the Canterbury earthquake sequence resulted in sizable evacuations of the city for no reason. “Moon Man said his monthly predictions had a margin of error of two weeks on either side,” explained Mark, “which means the quake could have come at any time of any month.”

The gravitational pull of the moon does not induce earthquakes. And besides, a half moon does not weigh any less than a full moon. It’s still the same moon. Mark occasionally gets a little frustrated at having to field these kinds of questions from the media, rather than talking about the good science that earthquake scientists do.

“They say seeing is believing,” said Htin, “but these days that’s not necessarily true. There's a lot of information online and we don’t always know how to think critically about it.” A very damaging example of this was a fiasco caused by AJ Wakefield in 1998.

“Vaccines don’t cause autism,” Htin said, for what sounded like the hundredth time. The current paranoia surrounding vaccines, according to Htin, could stem from a 1998 paper that somehow managed to get published in an extremely high-brow medicine journal, The Lancet. The research connected vaccines with developmental disorders, and made a big splash in the medical community.

Except it was total bullshit. It took 12 years to redact the article, and by that time, the damage had been done. “Imagine you had a hypothesis. You say that ‘all cats are white’. You’ve only seen two cats, and they’re both white,” explained Htin, “but that doesn’t mean all cats in the world are white.”

That’s basically what this paper did. The author cherry-picked his data to make it look like all cats are white, or in this case, that vaccines cause autism. Now, nobody would believe that all cats are white based on a sample of two cats. But plenty of people did believe, and still believe, this bullshit research.

Htin was adamant that “critical thinking skills need to be a priority for university teaching”, and that with more emphasis on teaching these skills at a younger age, bullshit like this could be sniffed out and avoided by the public.