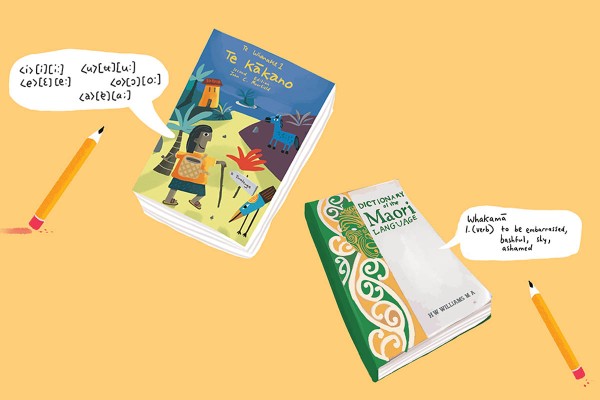 Juggling uni, identity, language, and the effects of colonisation all at once

Te reo Māori is an official language of Aotearoa, but has only been recognised as such since 1987. For Māori, their language has always been the ‘official’ one.

For Māori in the early 1900s, most notably before the World Wars, te reo was their first language. However the effects of colonisation, such as urban drift and discriminatory school restrictions such as harsh punishment for speaking te reo Māori, eventually factored into more English speaking and less use of the Māori language. Not only were Māori slowly losing grasp of their language, they also suffered and continue to suffer the repercussions of colonisation. Intergenerational trauma is real.

How we learn the language has changed since then. Māori as your mother tongue was passed down from generations, but there is a noticeable gap between the older generations who retained the language and the younger generations who are revitalising the language. Most people learn te reo Māori conversationally with family and friends, slightly fewer from immersion, and many teach themselves. Younger generations are going through Kōhanga or Kura Kaupapa Māori now more than ever, however studying Māori language at a tertiary institution is reportedly the least common way of learning to speak and understand te reo Māori.

If this is the case, then it begs the question - what is the learning journey like for students? It is certain that learning a language is considerably harder as an adult, not to mention juggling studies or paying hundreds to learn through uni curriculum, but Critic spoke to students who are giving it a good crack.

Sam is from Ngāti Porou, and had little Māori culture throughout his upbringing. He was born overseas and “grew up in predominantly Pākehā areas”, so his father was really his only connection. Before uni, he had limited te reo Māori speaking abilities; school offered Māori as a subject but it “was less focused on learning and more focused on grades”.

Taking Māori papers at uni was Sam’s opportunity to learn more te reo Māori, something that he was passionate about. He said “the papers were a real eye opener” because they focused purely on te reo Māori, rather than culture as a whole. “The tutorials were interesting and chill” in comparison to class, and he found that everyone in the tutorial got to know each other well, so it felt like a safe and collaborative space to learn the language.

Sam said that coming to Otago Uni has helped him to “connect with people that see the world in a similar view”, something that he never was exposed to growing up. “These people have supported me and allowed me to connect more with my identity”, which he believes has been an overwhelmingly positive experience. He looks towards a future where he can keep learning the language and improving his skills, because there’s always room for more knowledge. “I intend to keep growing my ability in the hope that one day I’ll be fluent, and be able to represent my whānau through the language.”

Tahu, from Rongowhakaata, is another student who has learned a great deal since being at university. He was “lucky enough” to have a bit of exposure to Māori culture growing up, as his dad made sure that him and his siblings knew about their whakapapa and Māori identity. “Although I was exposed to our culture and marae, I still spent a lot of time within the Pākehā world and struggled in terms of identifying as Māori.” He recognises that te reo Māori was “not a big thing” in his family and small town, but he has always been determined to learn.

University was Tahu’s opportunity to learn te reo Māori, a topic that wasn’t available at his school. “I took all the 100-level papers and they taught me the basics I needed to know” in order to continue teaching himself. He also attended te reo Māori tutorials offered at his hall of residence in first year - they not only taught him about the origins of te reo Māori which made it easier to learn, but they also “taught me a lot about my whakapapa and ensuring the language is carried through my whānau”. He thinks it was unfortunate that he had never had the opportunity to learn the language growing up before uni, and that he has to pay fees or teach himself, but believes learning it is important regardless of the circumstances.

The university experience overall has improved Tahu’s cultural identity, he said “being surrounded by other Māori has impacted me significantly and made me more comfortable and proud of being Māori”. He explained that throughout his life, people made him feel like being Māori was “a bad thing”, and this discrimination caused him identity issues, but university as a whole has really helped him understand his place in Te Ao Māori. He hopes to be fluent one day so he can carry the language through future generations.

This determination for passing on the language is all too common for Māori. Towards the end of the 20th century, concerns emerged that Māori language was dying out, sparking the revitalisation of te reo Māori. The past 45 years have been a crucial period for reviving the language, with Māori Language Week observed from 1975, and Mahuru Māori (Māori language challenge for the month of September) established in 2014.

Taking part in Mahuru Māori this year, Simone from Ngāi Tahu and Waitaha shares a similar perspective. Growing up in the South, she had little awareness of her cultural identity until early high school. She said “I started having more kōrero with my granddad about our whakapapa and my identity,” and she became more passionate about her culture. After realising who she is, she said “funnily enough, I immediately started ticking Māori as my ethnicity” on every form. “I was just never given much opportunity to explore that”, and without the exposure to her marae or anything in regards to Te Ao Māori, she “never got to experience those things until I was in high school and able to get out and do things myself”.

Simone began her learning journey in high school, taking te reo Māori papers and kapa haka, but found “it was really hard for me to keep my reo after I had learnt a fair bit… because no one I knew, besides from my reo teacher and kapa haka tutor, could speak it.” Living in a dominantly Pākehā area didn’t foster ideal learning environments either; “living in a district of 43,000 people that has only 7.4% Māori, and only 11.7% of Māori actually speaking te reo Māori, so like not much at all, didn't help me with holding on to my reo or engaging in cultural activities.”

During her first year, Simone attended tutorials run by her hall of residence, and her Māori executive for her course, Health Science, has “set up classes for our cohort this year too which have been great”. She continues to juggle her degree and teaching herself the language. “It's really hard going, especially doing it at home where I have no one to practice with.” But she stresses that it’s all worth it in the end: “it's a good feeling when you go somewhere and someone is speaking te reo Māori and you can understand.”

Overall, Simone believes coming to uni has been the most rewarding cultural experience that she has had. Her friend group at her hall were “largely Māori which I had never had before, and with them I was able to learn heaps, even if they didn’t know it”. She remains a huge part of the Ka Rikarika a Tane mentor program run by the Māori Centre, and says everything about her experience here “has been invaluable to me and helped me feel a sense of belonging much stronger than I had before I came down here”. She is determined to keep learning te reo Māori and even more about herself, her whakapapa, and anything Te Ao Māori.

Simone encourages people to undergo a journey of language and self-discovery, no matter how whakamā you are. Her parting words are “if you're like me and come from a very European upbringing, perhaps you are fair and have red hair too, don't be afraid to learn more about your Māori whakapapa and identity. Down here at Otago there are so many ways to get involved and learn more ... be proud of who you are!”

Teish is from Ngāti Ruanui and Ngā Rauru, who is one of the most dedicated and passionate learners in terms of her culture and language. She “grew up very much in Te Ao Pākehā, where I was hardly exposed to any essence of Te Ao Māori at all”, and felt growing up there was such a “negative stigma to identify openly as Māori, even as a kid, which I think just shows the underlying racial themes still very much present in Aotearoa despite 'efforts'”. However, she has always identified as Māori, it’s just later in life she has really become self-aware and “delve[d] in to what [identifying as Māori] actually means to me and to my wider connection to Te Ao Māori”.

Beginning her studies with 100-level Māori language papers, Teish said it “just felt right, even though I felt whakamā being a brown kid who didn’t know her reo”. However, she said what she found “weird about learning te reo Māori through uni is the assessment side of it because why should grades determine a perceived level of achievement when it comes to reconnecting?”

Teish continues the language papers and tutorials, and she is “wanting to join the tutorials that TRM offers” but she finds herself so busy with work and uni. However, she continues to teach herself in her spare time because she feels “learning the language aids in a sense of connection and belonging to Te Ao Māori despite living away from hau kāinga and what not”. She also feels the need to educate others along the way, to hold herself accountable and help others reconnect.

For Teish, coming to Otago Uni has “provided me with an opportunity to reconnect with what I feel is who I should have always been growing up”. She has been surrounded by friends who are culturally aware and in tune which has “challenged me to keep learning despite uncertainty as I want to achieve the same feeling”.

She looks forward to learning and growing, something that will never stop when it comes to Te Ao Māori. She encourages others to learn more too, saying “it can be a very challenging thing as it is a vulnerable move to make. But kia kaha, the unknown seems scary until it is known” and it will definitely pay off in the long run.