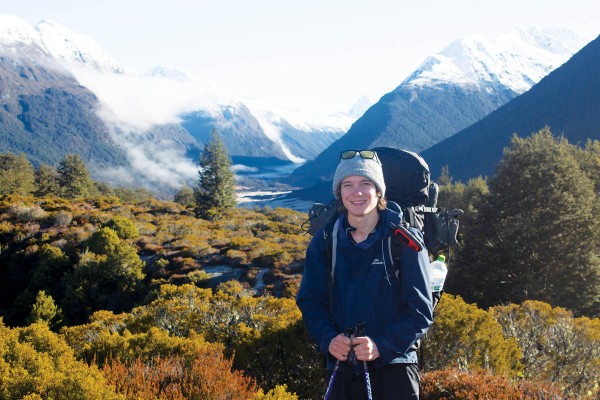 This man is walking the length of the entire country. Why? “At this point it’s about exposure - getting as many people to donate what they can before I close the fundraiser.” Jono’s walk (#NZhikeforlife on Insta) is an effort to raise awareness for mental health - specifically that of young, male Kiwis - and this cause has motivated him to continue when many others have quit.

“Yeah, I reckon I’m the only one still on the trail. Only one to re-embark from so far north this deep into Winter, anyway.” Jono is just weeks away from completing the 3,000 kilometre walk from Cape Reinga to Bluff. He will finish on Monday 27 July – the same day you might have picked up this article.

Before we go any further: you should consider donating while you still can. Donating is a hell of a lot easier than walking the length of the country, so, in the words of Jono himself: “Be a good cunt and chuck in a few bucks.”

Critic joined Jono in the Mavora back-country to hear his thoughts. Like all good wilderpeople, he’s a fountain of well-articulated and practical bits of philosophy despite looking (and smelling) like he hasn’t showered for the last eight months. It’s hard to write about Jono without making him seem like some mythic, heroic guy, but he’s really just another Dunedin lad like the rest of us, and he wouldn’t want you to lose sight of that; it’s his actions that are special.

Over the four days I spent walking with him, a few themes stuck out: “You’ve got a lot of time to yourself on the trail,” he said, “plenty of time to think”. Here’s what’s going on inside the mind of the last southbound man on the Te Araroa.

On Bro Culture and Kiwi Society

Jono’s a little sheepish at first, but it doesn’t take much to get his thoughts flowing - especially on the topic of mental health. Mental health is obviously a problem in this country, seeing as we taut one of the highest standards of living in the world hand-in-hand with an alarmingly high rate of young male suicides.

“In my experience, in this country, when someone’s like ‘oh, I don’t feel good,’ people respond with ‘shut the fuck up bro, toughen up bro,’ and those guys, people that say shit like that, I’d say they can go fuck themselves.”

Jono stopped and leaned against a mossy boulder, squelching the water around the insides of his mud-caked boots. It’s freezing, but he’s grinning and scanning for the trail ahead.  “Everyone has a passion, I truly believe that. And it’s achieving goals within that passion that makes a person happy.”

Jono’s passionate about the outdoors, the wilderness of a country that he doesn’t think enough of its citizens truly explore and admire, and the benefits that exploring it can have on your mental health. The decision to complete the TA was one that would “create an improbable physical challenge” (and thus inspire donations) while advocating for exploring our NZ bush.

“I’m not trying to say: ‘I’m doing this, so you - you depressed cunt - you need to do this too…’ that’s not the purpose at all. I’m just trying to raise as much awareness as possible, and to advocate for getting outdoors, for how freeing that is on the mind.”

My guide turned to resume the bush-bash and I did my best to keep up. Even the sapling beech trees rose above our heads and whatever excuse for a trail we had been following had been replaced by a deep channel of mud and flowing water. At one point, Jono probed the depth of a mud puddle with his pole and found it to be about 50 centimetres, despite it looking like solid ground. We tried to walk on knotted, slippery roots and rocks when possible.

On Looking After Yourself and Your Mates

To all the lads out there who’d hesitate to be “soft” around their mates, Jono wants to make something crystal clear: “If someone ridicules you for expressing yourself, you’ve gotta tell that person to go suck eggs and get fucked. That’s not a friend. Friends will always have time for other friends, and if they’re not listening, they’re not a friend.”

Humans are social creatures, and we process whatever’s going on inside our big-brain meat-computers through socialization. If you’re made to suffer silently and spend your life as just another cog in the machine, you’re neglecting your passion and living an unfulfilling life. Feeling like a nameless cog, feeling like you don’t matter or that there’s no point to anything: Jono says that those feelings aren’t real, they’re a “symptom of depression and of a dark mind”. Exploring whatever you’re passionate about helps to quell these feelings, but other people can help, too.

“To educate people on what to do if not only yourself, but someone close to you is feeling depressed or anxious - that’s a very core part of why I’m doing what I’m doing.” So next time you catch a mate saying something concerning, something that doesn’t sit right, you need to dedicate time to that person and give them a chance to ask for help. It’s what you’d want if you were in their shoes, right?

So many young Kiwis are suffering in isolation. “I think one thing that I missed with my late friend, one thing I should’ve been more conscious of, was dedicating that time. I was a bit too caught up in my own agenda.” Talking to a mate you’re worried about or bringing your concern to the attention of their loved ones will probably be awkward, but “even if it fucks up your friendship, at least they’ll have more support”.

At this point, the temperature hovered around 1 degree and we hadn't seen a trail marker in 45 minutes but Jono didn’t seem to mind. He reminded me that there are far worse places to be than lost in the bush.

On the Importance of Baby Steps

Jono began the trail in November, and eight months later is somehow still motivated to be hiking towards Martin’s Hut (the last one on the trail) where trampers report “rats the size of dogs”. Most thru-hikers started earlier than Jono and were able to make it to Bluff before lockdown, but plenty of others had their hikes interrupted.

According to the logbooks, Jono is the only southbound tramper that came back from lockdown to finish what he’d started from as far north as he did. If there’s one thing that sets him apart from the rest of us, it’s this obsessive devotion to the task at hand: once Jono says he’s going to do something, he means it, and he’s laser-focussed on seeing it through to completion.

I realized quickly that Jono shows the same mad determination in every facet of his life. When we finally got to Te Anau, he looked me dead in the eyes and said “I’m gonna eat as many pies as I possibly can,” and then proceeded to eat four pies in 13 minutes before announcing that he was “literally full”. It was disgusting and impressive; an achievement of ambition.

“Ultimately, being in control, feeling like you’ve done everything you’ve hoped and planned at the beginning of the day, it gives you a huge sense of self-fulfillment.” Jono explained this philosophy to me as he waded through a tussocky bog under a cloudless sky. He believes that setting goals - big or small - and then achieving them is the key to warding off depression, and that tramping is a natural way to practice this mentality.

“You wake up in the morning and you set yourself a goal: ok, I need to get from A to B, and then you just fucking do it, and then you feel accomplished. That’s all human psychology is. That’s where happiness stems from, that’s where the serotonin comes from, y’know?” At this point, Jono turned around to make sure I’m listening. He was knee-deep in mud but barely seemed to notice; his focus was on the conversation, and his body was on autopilot.

On the Healing Effect of Nature

Jono’s only concerns whilst hiking are to not get injured, not get lost, eat well, and stay warm. He doesn’t have time for anxieties about superficial things and isn’t looking forward to returning to a modern lifestyle where “trivial pursuits” are at the forefront of his mind once again.

“In everyday life, it’s so easy to get caught up in the things that don’t really matter.” The experience of being outdoors, of living literally one step at a time, is incredibly helpful for pulling yourself out of a stupor. It’s inherently a process of achieving tiny goals and releasing the requisite bits of serotonin along the way.

“If you’re out there in nature, you have to keep your head in the game the whole time or you’re gonna fuck up. You have to watch your every step, you’re forced into the zone, every single step, every single kilometer of every single day, your mind is forced to be present.”

Depression is an especially insidious illness, one that often prevents the person afflicted by it from seeking treatment. A physical injury is visible, tangible, and knowledgeable by others, but mental illness is invisible, slippery. It’s all well and good for Jono to say “well, hike for this long and you’ll feel better,” but how do you get a depressed person to actually get up out of the house and into the wilds?

Jono pitched me this hypothetical over a cup of coffee one morning. Especially if someone is depressed, finding the motivation to get themselves outside can be impossible, but necessary. “I appreciate and understand that people sometimes just don’t have the desire, but for fucks sake, just get outside.” Break it down into baby steps if you have to.

Outside the unheated hut, frosted tussock fields shone in under a pale purple sky. We were about to set off on a 46 kilometer slog, during which we would encounter only two other human beings. “There’s always an element of loneliness on the trail, and it’s hard to pin down what the effect that feeling will have on someone who’s depressed.”

One unavoidable effect of isolation in nature is that “people become more comfortable with themselves”. There’s a reason so many people from so many cultures have heralded the importance of time in the wild: the meditative experience of wandering is something we all can relate to, and an effective cure for the stresses of modern life. There’s something very human about it.

If you feel like donating to the fundraiser, you’ll be providing free counselling services to struggling Kiwis, and giving them a chance to ask for help. If you’re stressed, depressed, or anxious, and you’re looking for a cure yourself, “get out there. You’ll learn how to be self-sufficient, you’ll free your minds, and you’ll learn to accomplish goals. You’ll build brighter days.”

Two years ago, depression took the life of Jono’s best mate - an occurrence all too common in Dunedin. The young Kiwi’s ashes were scattered on Butter’s Peak and, in his memory, Jono has walked the length of New Zealand.