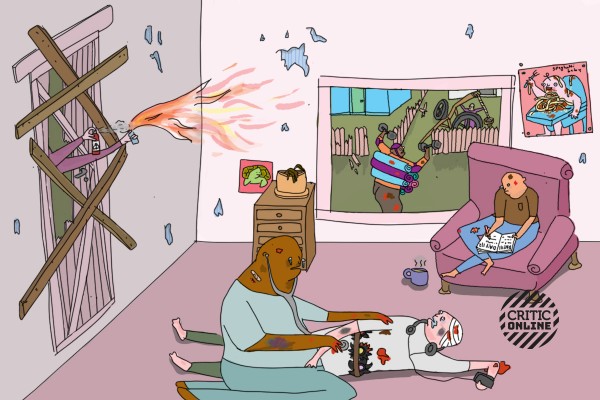 Best Degrees to Ally With During the Apocalypse

You’re filling out your dream flat, but can only choose five flatmates. You don’t know how long this will last. It could be just four weeks. Or maybe society will break down, and these five people will be all you have in the post-covid hellscape. Choose wisely.

Physio: Med is good if you want to camp at home, but physio shines in the fields of battle. Their well-rounded knowledge of body mechanics, nutrition, and first aid makes this degree an excellent addition to a more exploratory-based team. They have practice treating common injuries, they can run a gym, and - critically - they can give bomb-ass massages. Also they’re generally jacked. Extremely useful.

How long they’ll last: Indefinitely, but a high-value target for other flats.

How they’ll taste: A bit too chewy with all that muscle. Too lean. I hear vegans taste nice, though.

Chemistry: With an abundance of common chemicals, this degree can fashion explosive devices and other offensive substances. If paired with a med or physio student, a chemist may even be able to produce medicine or other more interesting drugs. Your chemist may accidently find a cure for covid, but they are also just as likely to burn down the flat in the process.

How long they’ll last: Until they blow themselves up.

Commerce: Basically useless, stock markets are fucked, they’re just gonna cry the whole time about their losses, but could prove useful as a designated scout. Alternatively, you could eat them. If you end up running a drug business (see: botany) maybe you’ll need an accountant. They’re in offence because they’re expendable, and at times like this, you may need some cannon fodder.

How long they’ll last: Until you get hungry.

How they’ll taste: Rich. Rich and creamy. That’s some grade-A flank, if I’ve ever seen any.

Surveying: Again, if you’re going for an outdoors-based strategy, meaning you’re playing the long game, you’ll want a surveyor or a geographer. Someone who can navigate the mountain ranges in search of fresh water, scout out a stable place to shack up, etc, that’s very useful. You’ll have to deal with their personalities until the real apocalypse starts, but when it does, they’re gonna shine.

How long they’ll last: Until capture or avalanche.

How they’ll taste: Beefy calves, so you can always just eat those first.

Geology: Similar to surveying, the geologist is a useful addition for an outdoor team. Their exploratory abilities are almost on par with surveying, but they make up for it with their attitude. Geologists are notoriously rowdy folk, and usually have prior experience with outdoor survival, so they can make your team a little hardier than the more bookish surveyors. Do not combine the two - infighting will ensue.

How long they’ll last: Probably drinks themselves off a cliff in week two.

How they’ll taste: With enough weed in their system, you might even get high.

Theatre: These guys got way into it way too quickly. All semblance of humanity dissolved on day two. Method acting brought them into the apocalypse warlord mentality and there’s no going back. If you want a personal Mad-Max methodologist, your best bet is theatre. Pandemic or no - the show must go on.

How long they’ll last: As long as they keep believing in themselves.

How they’ll taste: Hairspray, nicotine, and weeks worth of vodka.

Physics: Useful for booby-trapping a home, as well as maintaining the integrity of the building. Can set up a winch-pulley system for loading groceries through the window. Also, with physics students, you don’t have to worry about their partner coming over and infecting the flat. They’ve been doing this self-isolation thing since they started uni.

How long they’ll last: They’ve made it this far.

Weapon of choice: Trebuchet. For students under the 300-level, catapult.

How they’ll taste: Stress kills the flavor. Not great.

Dance: The closest to martial arts as a degree, dance students are in excellent shape and have been ready to fight since 2008. Use your dancer to guard the door, and believe that they’ll be the first to respond to a home invasion. Their agility makes them ideally suited for close-quarters combat (i.e., in a flat), and their deep-seated anger will make them a furious combattant.

How long they’ll last: As long as those feet keep tappin’.

How they’ll taste: Too gamey.

Psychology: Psych students are psych students because they like studying people. You’re gonna be stuck with them for at least 4 weeks, so this could get annoying quick. However, if you let one go mad, you can chain them outside your front door, which is almost a guarantee that you won’t be robbed. If you give them enough psychedelics, they can break through this abrasive phase and transcend into a flat guru. If you can get there, it’s step one towards a successful doomsday cult.

How long they’ll last: Not too long, if I have anything to say about it.

Law: Who cares about law in a lawless land? Try to organize flat chores like we’re still worried about trash when there’s rioting in the streets? A gavel is only useful against one opponent at a time, so useless in mob combat. You can choose to keep one chained in the basement free of cost, except you must provide a consistent supply of booze or they’ll go into withdrawal and die.

How long they’ll last: Either immediately killed, or lives to govern the new era. Charisma will decide.

Weapon of choice: Your words against you.

Botany: In the post-globalism era, the ability to generate your own food is critical. And when you run out of law students, what’re you gonna eat? A botanist can grow a fledgling garden, can forage if you abandon the flat, and maybe can grow their own weed. If there's a market to corner in the apocalypse, it’s running the drug rings, and it’ll be handy to have a botanist in your pocket. Green thumbs get the thumbs up.

How long they’ll last: Will hole up indefinitely, and transcribe the happenings.

Med: Knowledge of severe injuries and rare conditions will likely prove useless in the day-to-day apocalypse scene. If you’re worrying about brain hemorrhaging or lacerations, you’re probably just fucked anyway. Med is useful because they know basic principles of first aid and can act as a de-facto flat doctor, but absolutely infuriating to spend a prolonged amount of time with, and there’s a better option anyway.

How long they’ll last: If at home, a while. In the field, two days tops.

How they’ll taste: Afternotes of cocaine.

Dental: Kinda useless at the moment. Who cares about a cavity when you’re worried about looters and mobs? If they came with an endless supply of dentistry-grade morphine, they’d be straight at the top of this list. But they don’t.

How long they’ll last: As long as there’s toothpaste left on this planet, 9/10 of them will be around to recommend it.

Computer Science: They haven’t even really noticed that we’re under quarantine because they’re still in their rooms. That being said, the new Animal Crossing is out, so they’re all really excited right now, and it’s a great time to align yourself with the people who have the best TV/game setups.

How long they’ll last: As long as the power stays on.

Music: Great moral booster, but right now might be partial to sad-boy sounds. They can bring vibe, or bring the vibe down, but music is an integral part of the human experience. However, just because a student isn’t in the music program, that doesn’t mean that music students are the only ones who know how to play music.

How long they’ll last: At least until the next Frank Ocean album.