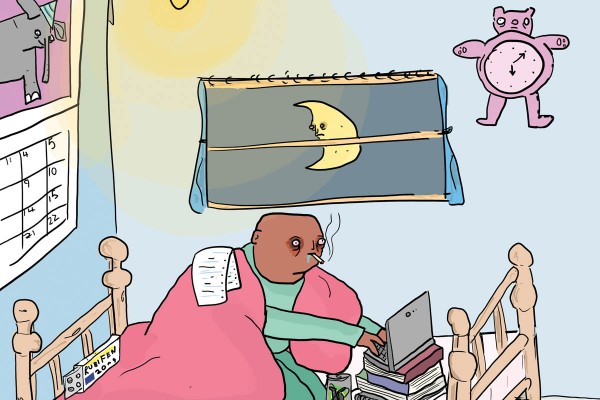 By one very exhausted and hopeless postgrad student

I was given this in an antique jar, as if it had come straight from the apothecary as opposed to out of some dude’s giant delivery from the dark web. Unsure of how to consume ‘racetam, I jumped online to find that snorting nootropics such as these wasn’t the way to go. Unfortunately, I had no idea of how to dose, given that I didn’t happen to keep my handy drug scales at uni. After Googling phrases such as “how to eyeball 200mg” and other things that the government have probably red flagged me for, I found that you can use the size of a Canadian coin to dose your study drugs, and that said Canadian coins are the size of two 10c pieces. I settled in to await some magic.

After about 40 minutes, I started feeling very peppy and engaged in what I was doing (which is saying a lot because it was mindless Excel work). I actually raced through my work really fast and managed to smash out about 2000 words towards my dissertation, which is unheard of for me.

Sadly, tolerance builds really fast on this stuff, so the next day was not even half as magical. I would recommend as a one off affair, maybe if you needed to spend an entire day making graphs or figures in the last two weeks of a thesis.

I give phenylpiracetam 7 out of 10 awkward supermarket encounters – it works, but tolerance is a bitch.

Methylphenidate is just the proper name for Ritalin, which is also sold under other various brands – Rubifen being one of them. Methylphenidate IR is Purpose in a Pill for folks on the go. This made me quite jittery, and although I got a lot of work done, I kept wanting to stop and have D&Ms online with random friends that I haven’t spoken to in quite some time. So, if you’re wanting to reconnect online with people, then boy howdy this is the drug for you. If you want to get uni work done, this is also the drug for you, but my advice is this: Don’t consume it until you are already working on whatever thing it is that you need the boost for. Otherwise, you’re going to end up really focused on something that may not actually be your uni work.

I give Ritalin IR 6 out of 10 knowing stares – it will make you stare a lot.

I managed to get my fiendish grubby paws on what I consider to be the Holy Grail of study drugs – the Concerta 36mg slow release. You pop that baby at 8am and you’re off on the most productive rollercoaster ride you’ve ever embarked on. I had procured this bad boy at the end of last year’s exams, and I had been saving it for a day where I would have a strict to-do list and needed the focus for a good 10 hours.

The Concerta has a good mouth feel, a pleasant oaky timbre, and just a whole lot of fucking focus in one sweet gulp. Because it’s slow release, you don’t get the jittery feels of the instant release, which is the best thing about it, in my opinion (if I wanted to feel speedy, I’d just get some meth, cos it’s easier to find than this stuff). A day on Concerta makes me feel like how normal people probably feel, and makes me able to have a regular conversation about one topic that doesn’t involve me interrupting the shit out of the other person, or flailing off on wild tangents.

It must be nice to not be constantly fighting your brain all the time, and Concerta 36 gives me that sweet respite, which is why, if I ever stumble across any, it is reserved for a special occasion like getting through a day of important data work.

Concerta 36mg SR gets 11 out of 10 jovial American paratrooper WWII salutes (around the time they were in England having lots of sex before they went to war and saw their friends die. The salutes were never the same after that.)

I’ll be honest, I tried nicotine as a professional courtesy to Critic’s Culture Editor Henessey Griffiths, Darts Extraordinaire. The nicotine did not help me study at all, however I definitely felt about 4 percent cooler. I also feel like perhaps I moved a little further along the Kinsey scale.

Because I was too busy making smoking videos and looking around to see if anyone was checking out how cool I looked with a dart lodged between my fingers, I got literally no work done while (high?) on nicotine, and felt really guilty when my boyfriend smelled my hair later that day.

While the flavour could be a lot better, that’s the gamble one takes on sugarfree products. This shit turned me into a zombie and I feel like caffeine actually had the opposite effect on me. I kept yawning and wishing I were having some Concerta 36 instead. Caffeine is lame and was probably invented by the Russians to fuck over the Americans in some way. I feel like the people who bang on about coffee are brainwashed. Unpopular opinion: all coffee tastes the fuckin same so if you want to save a fuck tonne of money just buy instant coffee instead. Anyway, back to the sugarfree V – fuck that noise, I want my brain to work please. I got hardly anything done and also had trouble sleeping.

Caffeine gets minus 4 out of 10 bougie white bitches that think every cup of coffee tastes different to its predecessor.

I happened upon some Modafinil by pure chance, from a friend who got it from a friend of a friend of a dental student. Dental students get fucked up on the regs, you heard it here first – another reason to not trust dentists. I was instructed to only take half, but it did fuck all, maybe because I’m fat, but probably because I have been ruined by all the other study drugs. The next time, I took a whole one and it was better, but honestly it holds no candle to Concerta 36ers.

I give Modafinil 6 out of 10 Sheldon Cooper nasal whinges.