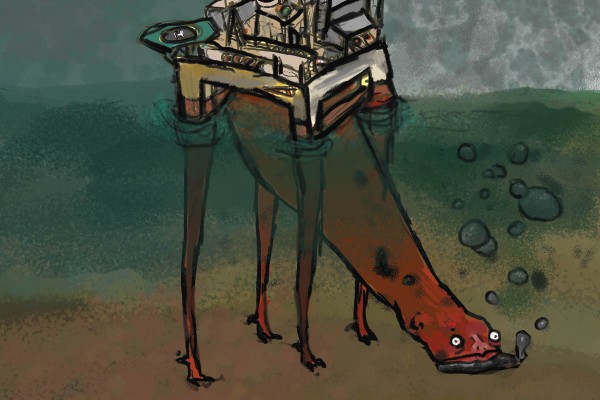 Sending Out an SOS: Understanding Basic Science is Mandatory if You Insist on Making Decisions that Affect the Environment

I don’t go out of my way to chat to climate change deniers. As a Marine Science student and environmentalist, little frustrates me more than the blatant disregard for decades of peer-reviewed scientific evidence (which speaks volumes about how much fun I am at parties).

But the last place I expected to find climate change denial was at an Enviromental Protection Agency (EPA) hearing about multinational oil company OMV’s gas and oil drilling off the coast of Dunedin, which occurred earlier this year.

At first I thought that the last interaction the EPA had with science was in primary school. However, I learnt that there was a specific clause in a piece of policy (found in Economic Exclusive Zone and Continental Shelf Act, section 59(5)(b)) stating that the EPA do not have to take climate change into account when making decisions about gas and oil drilling in our marine environment.

I cut the EPA some slack after learning about the fundamentally idiotic policy regulating important decisions about our moana taonga. Policy is determined by the Government, and I was in no way surprised to learn that the minister who rolled in this fucking stupid legislation, David Parker, studied a BCom.

However, when it came to Adam Currie’s turn for submission on behalf of Greenpeace, I began to despair. Currie had submitted Professor Linn Hoffman, a marine botanist, as an expert witness on the effects of ocean acidification on the marine environment.

For those of you studying a BCom who might go on to become the next Climate Change Minister, ocean acidification is caused by the reaction of carbon dioxide with water to form carbonic acid. Manmade carbon emissions have caused ocean acidification to reach levels that are no longer tolerable for some marine organisms, including corals. It has caused the death of a third of the Great Barrier Reef, as well as a third of my optimism for the future of humanity. Ocean acidification is caused by carbon dioxide, but is not a direct result of climate change, which the EPA had to have clarified for them several times by Professor Hoffman. The EPA would have had a better understanding of ocean acidification if they’d listened to her presentation, but instead they decided that ocean acidification had no relevance to the hearing about OMV’s drilling activities either. Again, I had to question the EPA’s basic understanding of science and the marine system.

OMV is one of the 100 companies responsible for 70% of the world’s carbon emissions since 1988, so their contribution to ocean acidification is nearly as large as Harlene Hayne’s salary. Professor Hoffman was told to sit down and Currie was commended for his enthusiasm for the subject like a ten-year-old at a science fair. The hearing proceeded. I questioned what the point of doing a Marine Science degree was when the people determining the fate of New Zealand’s marine environment don’t even understand basic acid-base reactions, which is something even bloody Health Scis can do.

I also noted the utter lack of mana whenua in the room. With Ihumātao on my mind, I was appalled by the lack of input from iwi and hapū, and wondered what they would have thought about the conversations happening in this room.

Writing down my notes on my phone, I was ordered to put it away, despite being surrounded by laptops. A red badge security officer glared at me, and I felt incredibly unwelcome. This was a public hearing, yet both the media and I were forbidden from recording the submissions or the EPA’s replies. The media table was placed at the back of the room, and told they were only allowed to photograph the submitters, not the EPA themselves. The level of opaqueness in the proceedings made for an eerily hostile and undemocratic public hearing.

When an ecologist presented his evidence against OMV, with graphs measuring sea level rise and climate change, one of the EPA panel members queried a plateau present in the measurements, asking if the ecologist could explain his evidence for climate change. At this point I left the room.

The overwhelming ignorance from people determining the fate of the marine environment I have grown to love during my study had me more upset than an episode of Our Planet. I was naive to think that just because thousands of Kiwis marched up and down the country for climate change that our work was done.

The censorship of climate change at a public hearing on oil drilling speaks volumes for the miles New Zealand has to go to keep up its international reputation as a leader in conservation.

If reading this makes you angry or upset, make sure to do something with that rage and email David Clark to ask him to amend the policy that doesn’t allow us to bring up climate change david@davidclark.org.nz. I’ll see the rest of you BComs in the climate change cabinet. David Parker, @ me on twitter @notabcom