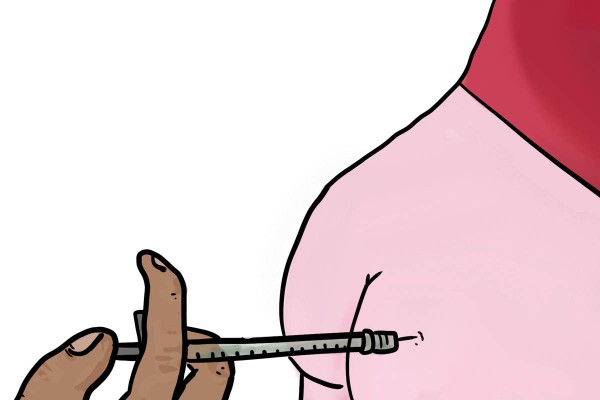 Written by a bunch of drunk and hormonally messed-up women.

As we all know, uni is a great time for experimenting with your junk, and the junk of other people. The best way to get your start in a career before ruining your life with kids is to use contraception religiously, so here are our thoughts on some of the more popular contraceptives out there.

Condoms are all good, but they’re also fucking spenno. I mean, you can go to the Sexual Health Clinic/Family Planning/Student Health to get some free ones, but who has the time for that? There’s nothing worse than realising that you’re out of condoms when you’re on the one way express to Poundtown. If you hate saving the environment and won’t reuse your own condoms because you're a piece of shit, you can easily make your own condoms at home. Here’re some suggestions for you: Glad sandwich zip-lock bags with a slathering of canola oil, some silly putty, a copy of Salient taped up really tight, a cheese roll, a pig’s bladder you have lying around, an empty Goon, a sock, a samosa from $3 lunch, or just the Catholic guilt from having premarital sex. I personally prefer the cheese roll.

The pill, the injection, the rod and the copper IUD all make me bleed like a stuck pig and turn me into a fucking banshee, and I can’t afford to try the $500 Mirena thingy (which probably wouldn’t work either), obviously, because I’m a broke student. After repeated requests, I have not been granted tubal ligation, because apparently women can’t make decisions about their own fucking bodies. And condoms irritate the fuck out of my skin, as well as being a major pain in the ass (condoms are for special occasions when your man wants to come inside you but not, y’know, INSIDE you). So what’s a girl to do?

Enter the Withdrawal Method, also known as “coitus interruptus”. A modern twist on the shady Catholic classic, this old chestnut has kept me proudly fetus-free for years. Basically you do the sex and then the guy pulls out just before shooting.

Pros: Hormone-free, can be used with other medications, you can eat grapefruit, very cheap.

Cons: SUPER unreliable, doesn’t treat against HIV/AIDS or STIs, and requires a great deal of self-control and trust.

Critic does not endorse this method as actual contraception, but the medical profession in NZ clearly fucking hates women, so this is legit the only available option for some people.

The Mirena is this little implant that they shove up your uterus that stops the eggs coming out. Getting the Mirena put in was one of the worst things I’ve ever experienced. It’s like shoving an anchor through a fucking needle’s pinhole. But, the idea of not having to remember when to take a pill everyday and it lasting five years is a bloody luxury. It acts as a great contraceptive since you kinda just forget that it’s actually there, but the downside is the added hormones make you feel like you’re playing period roulette. You compromise the fact you don’t need to worry about taking regular contraceptives with your period coming whenever it fucking wants, for as long as it fucking wants. Seriously. I’ve had my period for three months now. I have no more blood left to fucking bleed. My bit of advice if you’re having sex on the Mirena is to warn your partner that he might have to pull a Moses and part your Red Sea.

God’s loophole. I used this contraceptive method for the two weeks it took for my pill to kick in. With enough lube and some plugs to work ya way up it’s not all bad, ladies, though it is a lot more admin than the regular method. God bless bottoms.

Fun fact: In the Greek Orthodox religion, you can’t have vaginal sex before marriage - but nobody says anything about the booty hole. So blown-out sphincters are common by the time they walk the aisle.

Where my thicc girls at? This is the only pill option I can go on because I’m too voluptuous (not that my man complains, yeya). The downside is that I don’t get to magically skip my peri (periods) on these pills, and that the window for taking them is only three hours, which definitely does not suit my poor time management skills. Also fuck you, don’t tell me to set a reminder on my phone. I know that’s the easy solution. Maybe I like to challenge myself.

This pill made me depressed af and my blood pressure skyrocketed. On the upside, my skin was beautiful but I had mild headaches like twice a week and so I had to go off it due to risk of stroke.

I got put on this because I couldn’t go on any oestrogen pills anymore due to the risk of stroke, and progesterone pills gave me terrible acne. Because the thought of a foreign object inside me terrifies me (except for dick), I didn’t want to get the rod or Mirena inserted. You get an injection in your ass/upper thigh and hip area every 12 weeks and you’re away. The upside is that it’s free at Family Planning, and the majority of users’ periods pretty much disappear. It also has a really high effectiveness rate. The downside is that there’s a chance you bleed like, all the time and have to go on a pill to counter this; but this is rare, especially in longer-term use. I like Depo because I weirdly like injections and I know that sounds terrible and I don’t mean I do heroin but I like the personal attention and the suspense and it’s a weirdly satisfying pain.

People can tell I’m an idiot from a mile away. But even I can get laid from one of the final roamers at 3am in Catacombs looking desperately for a human vagina. As we meander back to their shitty flat, they usually realise, through a drunken haze that they’ve made a terrible mistake, but it is far too late to turn back now. Hook, line and sinker. Once in bed, halfway through some mediocre, sloppy sex, the true weight of their decision has set in. In a terrified panic brought on by the thought of having a child with the mothball equivalent of a person, their dick shrivels until virtually undetectable. With this, I leave them retching on the floor and return to my room decorated only by an Otago 150th Anniversary calendar and a single stock image of a businessman wearing a Bluetooth headset.

The ECP, aka Morning After Pill

What the actual fuck. I went to the Urgent Doctor to get this once. I told the pharmacist what I was there to procure, then waited … And waited ... And waited. Finally, the pharmacist (who, by the way, KNEW what I was after and had had AMPLE TIME to realise that I am morbidly obese) took me into the side room where the smack addicts get their mephedrone fix, only to tell me that I was too obese to get the morning after pill. Look, I know that I’m a fat fuck and that I’m obviously the worst person in the world for being fat, but WHY DID YOU MAKE ME WAIT 39 (I counted) MINUTES TO TELL ME THAT I AM TOO FAT FOR THIS PILL.

I could have fucking carried the baby full term and delivered it in that time.

I left with a casual “that’s okay, I’ll just have to get an abortion if it comes to that”.

They didn’t even let me hang out and have mephedrone, the cunts.

I guess this technically doesn’t count as contraception (defined as “the deliberate use of artificial methods or other techniques to prevent pregnancy as a consequence of sexual intercourse”) but it’s still a dummy thicc way to not end up with a kid. I had one of these, it was a short “day procedure” on a Friday and as long as you walk in via Cumberland St to avoid the ignorant rambling protesters, then you can make a pretty nice day of it. Start with a bougie breakfast at Morning Magpie before making your way down, taking the time to appreciate the wonderful life of freedom that you are affording yourself by not continuing this annoying pregnancy. Once you’ve nipped it in the bud, stay woozy on the meds and head on down to the Botans with some weed for duck feeding time. Smile smugly at the people with screaming children through your medicated haze and noise cancelling headphones. Cha-hoooo.

I had no idea what a dental dam looked like before I got given one in O-Week. It's essentially clingfilm for your pussy which is good if you have orally-transmitted STIs or are too cowardly to stick your face into raw minge, but also kind of insulting, like shouting “your pussy is rank”.

When I picked out "wildberry” flavour, I foresaw blissful visions of childhood lolly scrambles and purple Fruit Bursts, but instead the flavour more closely resembled a balloon, and the colour was like diving into Grimace's sweet latex clunge. When my partner and I swapped positions, she inhaled too hard and it went up her nose and throat and she nearly died. It didn't feel like anything, except maybe gently humping a wet pool noodle in the summers of one’s blossoming sexuality.

Dental dams are effective because they suck and you’ll probably just give up altogether. Maybe it's good if you want your booty ate but are scared of pink eye, idk.