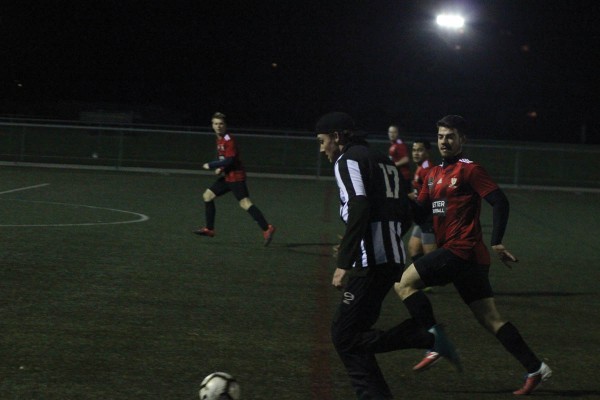 Big Hits 2: Critic Goes to Half a Leauge Football Game in Wellington

I arrived at Wakefield Park at five minutes to halftime. It was forty minutes past eight on a Thursday evening and I was running late for no good reason.

Aside from me, there were two other spectators: Bryn and Tintin, both ex-Otago students. I mentioned I was writing an article for Critic to break the awkward silence and they demanded a plug for their FC (Foot Club). I told them I’d put it in. They said they were here to watch the game, but also because “some of the lads needed a lift”.

At halftime the match was a tie, 2-all, between the Karori Rinston Weids and their arch rivals, The Red Barons. Not only was the game supposedly a “grudge-match”, but also a catchup game. Most other sports experts will agree with me when I say that soccer games are usually held on a Saturday morning. This one wasn’t for some unimportant reason which I couldn’t give a flying fuck about.

I did care, however, about the sports game unfolding in front of me. Shortly after halftime it became clear that the Barons had the upper hand. They had three reserves warming up on the sidelines and yelling support. Tintin explained to me how the Karori player in the incongruous black and white striped shirt was actually a friendly hockey player who was subbed in from the thin spectatorship.

The whistle blew as a Karori player took a hard tackle and was left lying on the ground. He soon came limping off the field looking for ice. It’s at about this point that Tintin and Bryn packed up the clubroom and left. Karori desperately needed new substitutes, but they muttered some excuse which was probably bullshit; about having work in the morning, before they shuffled off into the murky wind.

I was then the only spectator left. The Karori player in orange boots asked me if I’d like to join the game during a lull in the action. “I don’t think that would help,” I said politely. Fortunately the whistle blew before I could begin a long speech about journalistic integrity to justify my decision. I found out later the player also tried to recruit the ref, to no avail.

Throughout the game, the Barons kept most of the play in Karori’s half of the field. About 10 minutes in, a lightning fast Karori throw-in got stolen by the Baron’s and yeeted through the midfield. A melee of red and black figures circled the ball like a school of tropical fish. A long-kick by the Baron’s forward took the ball screaming towards the goal, only to be batted away brilliantly by the Karori goalie’s fingertips. As he fell to the ground stunned, the ball rolled back out onto the pitch.

In that moment the inevitable became apparent. The Baron striker gave the ol’ pigskin a decent booting into the high part of the net, which distended triumphantly.

At some point after the Barons score another point, the hockey player catches a mean header. After having his cap knocked off, he sprinted down the wing to take a shot at goal. Caught by the red goalie, the ball got punted over the other half and the usual pattern of play resumed itself.

Despite Karori putting up a strong defence, the ability of the Barons to field new subs and keep up the atmosphere had decisively turned the game. At some point I distinctly heard one of the Barons scream “big kicks!” from the sideline. They score a triumphant final point.

I talked to one of the benched Barons. He told me that despite having already sent two to hospital that night, “we’re trying not to rough them up too much”. Theres was indeed more than a few dramatic tackles, which mainly impacted Karori.

Once the final whistle blew they all began shaking hands manically. They didn’t even form a line. It is this kind of sportsmanship that Normal Soccer is all about. The Barons went and did a big group hug, complete with chanting. Karori by comparison strewed themselves besides their gear on the far sideline, looking tired.

The Barons asked me to take a team photo of them. I tried to explain that the lighting was kinda shit. They didn’t seem to care so I yelled some vauge instructions and they seemed pleased by it. It was Karori’s turn to line up in the goal next with shade across their faces. As we split to leave, the player who tried to recruit me near half time confides: “It’s a shame you weren’t here from the start. We had a really good first half.”