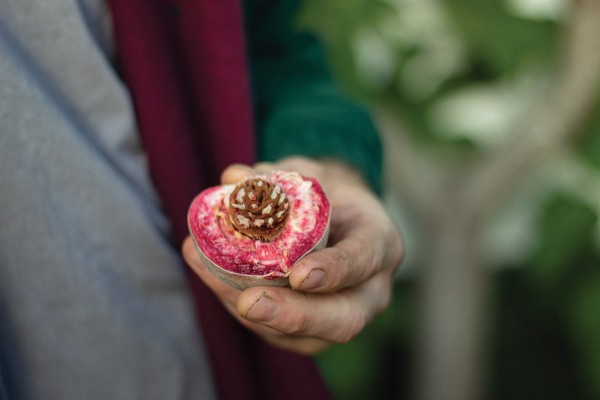 Rory And His Forest Garden

On the North End of George Street, in an orange brick house bedecked with vines and separated from the street by a row of feijoa bushes, lives Rory and his forest garden. The George Street Orchard has been ex-Otago student Rory’s pet project for the past ten years.

He invites me to try a grape. It’s a weird moment. It tastes like grape lollies, only much better -  juicer and more complexly flavoured. I always thought that they just picked the artificial flavours for candy out of a hat or something. Grapes from the supermarket taste like a bland mass product in comparison.

The grapevine is just a small sample of Rory’s growing prowess. His peaches are delicious, as are his apples. It’s clear he’s onto something. It seems like a very satisfying life, to be able to go out into the back garden and harvest fresh, high quality food. But it’s not as easy as it looks. Rory spends a lot of time in the garden, and hones his skills during his day job as a horticulturalist.

While Rory still buys most of his carbohydrates from the supermarket, his dependency upon supply chains based on fossil fuel use has reduced a lot due to the garden. He mainly gears it towards high value perishables and food you can’t easily buy, including feverfew (a flower similar to chamomile), gooseberries, currents, passionfruit, tamarillo (although it hasn’t fruited yet), Yukon (a South American tuber crop) and paw paw.

Rory says that in the early days of the garden he was driven by a “radical idea of self sufficiency”. He says “I don’t really subscribe to that anymore […] we’re interconnected beings; we rely on other people.” Indeed, Rory uses his garden as a teaching space to demonstrate the possibilities of sustainable food gardening in a small urban section.

He sees permaculture (an agricultural ecosystem intended to be self-sufficient and sustainable) as an ongoing conversation that “anyone who contributes to it sort of defines what it is”. He says it’s important to tackle issues like growing sustainable foods as they are “the low hanging fruit”- the types of issues that, when solved, begin to present new opportunities for more solutions to be built on top of them.

The George Street Orchard uses the organic method of “no-dig”, which Rory says is “the only way to go”. No-dig refers to the practice of avoiding ploughing and turning the soil as much as possible. Apparently the ploughing of the soil releases carbon into the atmosphere. So, for all the much-maligned impact of animal farming on the environment, industrial monocultures of vegan crops are, in many ways, disastrous too.

In contrast, the tactic of no-dig permaculture is to steward the soil so that it can nurture as many different types of plants as possible. A diverse selection of plants increases the resilience of the garden. For instance, Rory plants peach, kiwifruit and berries along with multiple kinds of feijoa - not to mention 14 different species of apple tree.

These perennial (lives more than two years) trees are a key part of building a sustainable food network. As the trees last year after year, there is no need to plough the field where they grow, to weed or plant new seeds. The carbon from the soil is kept in the ground as the tree itself sequesters carbon from the atmosphere.

Yields are maximised by carefully picking sites for each plant, at the same time as a diversity of plant varieties and different species of individual plants are chosen so that if something unexpected happens to one planting, there’ll still be more left over to harvest. It is well known that plants are often given to erratic behaviour, but climate variables such as frost and drought can affect flowering and fruiting too.

For Rory, a large part of the importance of running the George Street Garden is showing other people what can be done within the confines of an urban section. He says that unfortunately it’s often hard for students, as the “growing calendar doesn’t match up with the semester calendar”. He advocates for landlord buy-in; to encourage students with green fingers to get busy as the potential rewards and savings for students are high.

Composting is one of the easiest and most cost effective ways for students to reduce their waste footprint, while at the same time furnishing them with materials for gardening. Rory says that the main problem with compost, especially in student flats is a lack of carbon. This leads to the substrate “getting slimy or stinky”.

Rory reckons one of the solutions to the “too many food scraps” in the compost pile problem is for landlords to supply straw or woodchips. Either that, or “make it all happen at one person’s place”, preferably someone who really wants it. He’s had success in the past with putting a sign out front of his old flat soliciting donations from the community.

The message regarding compost is to go big or go home. At Rory’s place, he runs two three-square-metre piles, but advocates at least one square metre as a minimum to get the compost hot enough. Plastic bins, he says, tend to not be big enough. He has a similar perspective on raised beds - they’re not as good at getting into the soil, but they are effective if the alternative is not an option, such as in cases of polluted topsoil.

Rory’s main advice to scrubs is not to get carried away, but rather to start small and stay organic. “If you can’t maintain one square metre, how can you do ten?” He emphasises that newbies should do their research, steward the soil, and focus on learning the processes for abundance - such as weed control (something Rory spends much less time on now the garden is well and truly established).