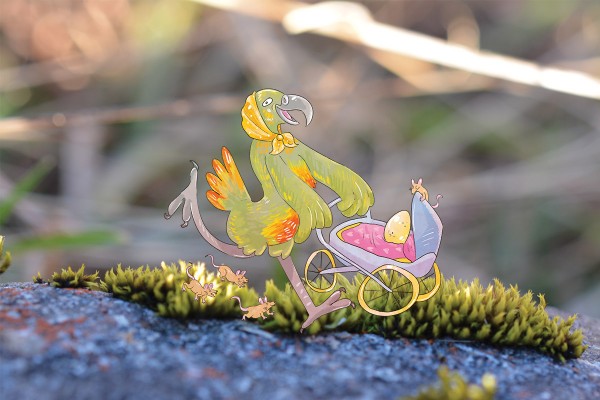 There are three, and only three, reasons that a student might visit this fair city’s botanic gardens. Firstly, drinking in a tree in an attempt to mimic an introduced marsupial. Secondly, trashing the fountains in the Mediterranean Garden by partying on the eve of a national tragedy. The third and final reason is to see the birds.

Like a five-star Pokémon trainer, the Botans have a seriously cool collection. Ducks. Seagulls. BigGulls. Stormy BigGulls. Hundreds of sparrows. Blackbirds. Even the occasional starling. This garden has but one crowning glory: the aviary.

Many species are kept at the aviary, both native and exotic. They range from the mundane (hi, canaries) to the mint - the big bad parrots, of whom there is a whole selection, from parakeets to cockatoos. However, to take the crown of mintest, there is only competition between two: Kea and Kaka. For the uninitiated, the Kaka is basically a joyful forest parrot while the Kea is its badass alpine cousin.

The Dunedin Aviary has not one, but two breeding pairs of Kaka, which are held to contribute to wild populations. Initially these breeding pairs contributed to the establishment of the (relatively) wild, although supplementary fed, populations at the Orokonui Ecosanctuary.

Since the genetic stock of the resident aviary pairs are now well represented in the local area, these days the chicks are reared in Dunedin then shipped North to Kahurangi National Park, under the auspices of Project Janszoon. The hilariously titled (after some Dutch explorer’s middle name) programme has been a remarkable success over its nine-year tenure.

Located at the Abel Tasman National Park, Project Janszoon has been a large contributor to the fact that, while South Island Kaka are rated as “nationally vulnerable,” the North Island Kaka, another distinct subspecies, is only rated as “at risk”. The effectiveness of the carefully-managed captive breeding programme is also helped by pest control efforts, including trapping and aerial 1080.

The pair of Kaka down in the bottom of the Botan’s aviary came from Queens Park Gardens in sunny old Invercargill, the second-hand carpet capital of the lower Southern Hemisphere. Alisha Sherriff, who is in charge of the breeding program here in Dunedin, is hoping they will reproduce this coming Spring, and that the chicks will be reared by their parents in the aviary with barely any human intervention.

The parent-led raising of the Kaka chicks allows their natural inquisitiveness to be fostered. Despite being in a public space, Alisha says the Kaka are good at interacting on their own terms. When it comes time to release the chicks into the wild, a soft release approach is used. Rather than abandoning them to the vicious whims of the big wild world, supplementary feeding is used to manage the release, so an eye can be kept on them.

Alisha says that there are seldom issues with releasing captivity-raised Kaka, and that “Kaka are pretty good at wilding up pretty quick”. However, the release project is not without its risks. The two main threats to Kaka populations are, along with habitat destruction, inbreeding (hence the need to steward genetic diversity) and predation, especially of the eggs of nesting birds.

Kea and Kakapo tend to nest on the ground, making them immensely vulnerable. While, Kaka tend to nest in tree hollows and lay their eggs off the ground, predation (especially from stoats and cats) is still an issue, especially during mega masts (which is when predator numbers, particularly rats, boom due to an increase in foodstuffs from beech forests). The increase in predator numbers means that when the weather cools off, and the food-source that led to the population boom diminishes, the predators will turn towards native birds for food.

This is a real threat for Kaka because of the propensity of stoats (“public enemy number one” for the nation’s native birds) to gorge on rats fed by the mast, before turning their attentions to nesting birds as the beech seed season passes. Alisha frames this as “a typical story of the New Zealand bush. We have a huge problem with predator numbers in our forests.”

Although the government’s stated goal of complete eradication of pests by 2050 might not be strictly realistic, it seems that the best bet for New Zealand native birdlife is captive breeding and predator control. However, Alisha emphasises that conservation is not an exclusive domain for those with a three year degree: everyone can get involved, through planting native trees, backyard trapping or financially supporting conservation efforts.

While the South Island Kaka breeding program has been a relative success, Kea breeding in captivity is not currently practised. DOC maintains oversight and a monopoly on the breeding of native species vulnerable to extinction. Alisha points out that there are dangers of overbreeding and making redundant populations that can only exist within captivity. This has typically been the case for breeding Kea.

In recent years, Kea have been decimated by introduced predators. Alisha suggests that a return to captive breeding of Kea pairs could be an effective way to bolster vulnerable wild populations. “I’m really passionate about Kea.”

The Kea kept at the Dunedin Aviary are there largely for advocacy reasons, as Kea have traditionally received bad press, due to perceptions of them as alpine troublemakers. They were for a long time subject to a bounty because of fears they were killing sheep. The bounty system is now viewed as an example of historical mismanagement. The Kea beaks at the Otago Museum are a macabre reminder of an attempt to extinguish a unique, inquisitive and interesting native parrot.

The more recent alpine terrorist narrative has tended to foreground Kea as car wreckers, as seen in many insurance television ads. Alisha says this is more due to Kea at tourist hotspots becoming habituated to the presence of humans, than it being behaviour present in more wild and remote Kea.

Part of Alisha’s role at the aviary is to spread a message of responsible conservation. One of the things that she wants to discourage is people buying large parrots, such as the Sulfur-Crested Cockatoos, like those they keep at the aviary. “Think about what you are doing before you randomly go out and buy these birds; they’re a lot of work.” They can live for 50 or 60 years – truly a long-term commitment. They can also end up “with really negative habitual behaviours” because they’ve been mistreated, or because their natural behaviours “are just not understood”. At the aviary too, they have more space and specialist support than hobby owners can generally afford.

If you’re keen to see and support birds, do it at the Dunedin Aviary rather than trying to commit to a long-term relationship yourself with limited means.