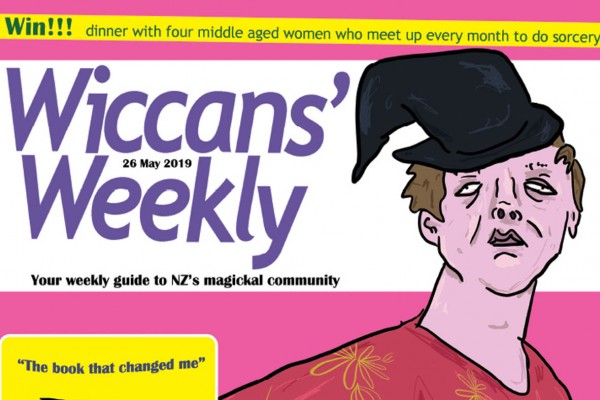 How I Became the Most Powerful Male Wiccan in North Dunedin

In the depths of time before the world came into being (2001), in a dark and distant land (the American Midwest), a book was made. This book was called “Wicca Spellcraft for Men” and I bought a copy of it from a library sale for a single smackeroo. After all, I was a man, and I was intrigued by what man spells I might be able to cast. It was the first step along a path that would lead me to become the most powerful Male Wiccan in all of North Dunedin.

A.J. Drew, the author of this mystical tome, has some strong opinions about Wicca. Turns out Drew’s not all good with how focussed on “the goddess” modern Wicca has become, or as he puts it, “Time and time again, when Wicca is the subject, the goddess is centre stage and men are once again spiritually and magickally castrated”.

For someone who doesn’t know how to spell the word “magic”, he’s got some strong opinions on the natural superiority of men. He’s also fond of thought-provoking sentences like “Do you want to be a Pharaoh or do you want to be a cowering slave?”

Drew’s a heroically tragic figure. He talks about how his father was a “loving but stern man” and then drops the emotional bombshell; “Fortunately my military service gave him what he needed to be proud of me before he died”.

I shed a tear, donned my druidic robes, kissed my celestial father on the lips, and embarked on my holy quest for testosterone-filled sorcery.

The first thing I figured out about the spells in “Wicca Spellcraft for Men” was that all the ingredients were fucking expensive. Drew, owner of what he proudly calls “one of the largest neo-Pagan/Wiccan shops in the Midwest,” loves telling the spellcaster to purchase fancy tinctures and crystals as part of his spells.

However, he also says that the most effective spells are the ones we make for ourselves. Keeping this in mind I decided to bring Wiccan spellcasting back to its natural roots, and made all my spells purely out of things I found in the botans herb garden.

As soon as I saw “Celibacy Spell For Men” listed in Drew’s spellbook I knew I had to invoke its terrible power. The spell told me that I needed to invoke the spell in the morning to remain celibate throughout the day. I was incredulous at first. Surely that miracle was beyond the power of man. But then I remembered that the Sorcerer need not abide by the same laws as the mind-slave.

I couldn’t find the “natural camphor” this spell required, so I replaced it with some “Soft Goldenrod” I picked from the botans.

Of all the herb mixtures I made this one was by far the best. It bound together in little clumps well and lit on fire with ease, producing a harsh woody smoke. The mild smoke inhalation was an added bonus. Maybe it’s just that I’m naturally talented at crafting celibacy magick; my gift, but also, my curse.

I donned my special ceremonial robe, carefully observing Drew’s magickal tenet that “If you wear undergarments, you are completely defeating the purpose of the robe”. I could feel the magic flow directly from my unclothed penis, vibrating ready to mould the world around me.

The ritual called for a “lustral bath” followed by a smudging with the ash of the appropriate herbs. I skipped the bath, because my flat doesn’t have one, but had an extra thorough smudge to make up for it.

I drew the magickal circle and tried to cast out negative energy. As I’m pretty much negative energy all the way to the core, this was the most difficult step. Then I annointed my forehead to open up my third eye and invited the quarters, lighting bundles of herbs at the compass points, imploring air, water, fire, and earth to make sure there was no sex for me.

At the climax of the ceremony, I invoked my chosen male archetype, the sacred Lord Breatha, to inhabit me, as well as acknowledging the female archetype Lady Thot.

Then came the most confusing step, called simply “cakes and ale”. I stole one of my flatmate’s Oreos and had a swig of some old Kahlúa that had been on top of the cupboard for months and hoped that would be symbolically sufficient.

The rest of the spell was effectively pack down - thanking all the mystical spirits for coming and walking the circle counter-clockwise.

That’s when I felt it. The pure fire of celibacy in my loins. I’m pleased to report that this spell was 100% successful - 24 hours after casting the spell I was still celibate. Not a single person did I have sex with in that time period. Magic is real.

I may have had a cheeky wank at one point, but that hardly counts.

Honestly I didn’t think this one through properly. I was still headstrong from my wildly successful celibacy spell. You’re supposed to toss this overboard before a boat journey to make sure your boat doesn’t sink or some shit like that. Unfortunately, I only remembered that I did not have any boating planned after I was halfway through the spell.

This spell called for cedar oil, but I figured some pine needles soaked in canola oil would do the trick. The needles didn’t mix well with the other ingredients and all in all it was a bit of a prickly mess.

Deciding to do a selfless deed with my - otherwise useless - spell I got two of my male flatmates (ew, no girls allowed) to go out onto the back deck to assist me with some higher-level casting. We tried to light the mixture on fire while chanting “We save sailors,” sending our spell up on the wind to help the maritime men of the world (women can make their own spells if they want to be saved). The mixture didn’t light very well and I burnt my thumb; I suspect the spell was too powerful, even for our collective Wicca levels. Either that or I should have made my flatmates take off their underwear.

(for a man to feel for women)

Ok, so I couldn’t find most of the ingredients for this one. I didn’t know what “neroli oil” was, but I knew I sure wasn’t going to find it in the botans. So instead I trusted my Wiccan instincts and substituted it for some plants whose names were obviously euphemisms for penises. “Ploughman’s Spikenard” was my favourite, followed by a decent chunk of “Good King Henry” and topped off with a dash of “Sweetwood”. The last one was a bit of a stretch, but it smelled nice and I figured it couldn’t hurt.

Honestly this spell was a complete failure. It did not work even a little bit. I blame my earlier extra-strong celibacy spell for negating the potency of this enchantment. Although it was also quite cold.

Instead of casting this spell into the aether in all its daemonic might, I bound the raw, unbridled magick into a charm to give to Critic Illustrator Saskia, who was coincidentally in the process of writing her last will and testament. Even though she’s a woman, and thus might spiritually castrate my magic power, I was pretty sure it’d work fine. And if it didn’t, I had an easy explanation for my impotent magic.

I put the goopy mess of plant matter and oil into an empty weed baggy and sent the bewitchment out into the corporeal plane.

Saskia arrived at the lawyer’s office on time, which she says was “definitely” magic. “Can you not just type everything I say. Um. I arrived, I almost rang the bell but I didn’t even need to because the lady was right there,” she said.

“Yeah man, I felt heaps of magical energy. It went without a hitch.”

High off this unprecedented success I am declaring myself the most powerful Male Wiccan in North Dunedin. If anyone would like to challenge my title I will be available behind Maccas for magickal duels between the hours of 4.20pm-4.20am.