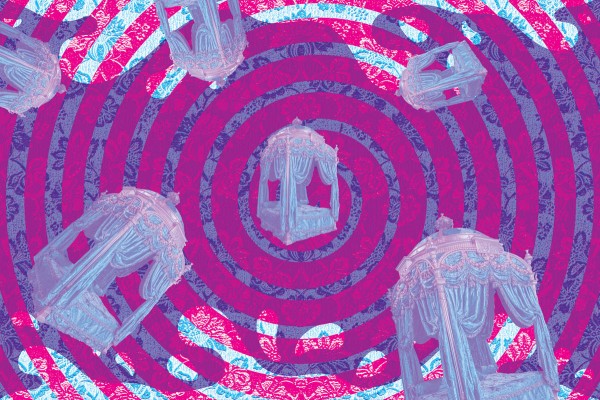 The Scandal of the Bed Sheet Wanker

It’s dark. The sun has set, and thick clouds obscure any light from the stars and moon above. Streetlights are being lit, horse drawn carriages are clacking across cobblestones, people are wearing dumbass wigs, and it smells like shit everywhere because, well, people are basically throwing their shit out of their windows from chamber pots and onto the street.

Yes, you’re in London in the early 19th century. You, the Duke/Duchess Haywood Jablome, have just finished up a long day at the salon, getting your nails painted and gossiping with other nobles, eating crumpets and drinking wine. It’s tiresome being rich, isn’t it?

“Hurry up!” you yell at your carriage driver. “It’s past seven o’clock and I’m hungry!” Your driver, Adolphus, cracks the reins and the carriage goes slightly faster and the ride gets a lot bumpier. You think about your big soft bed back in your mansion and smile to yourself. Hehe. Can’t wait to chill out in that baby later, you think. Maybe drink some hot chocolate, get my feet rubbed. Awwww yeah.

Adolphus raps on the door, startling you from your reverie. You’ve arrived home. He puts down that little step thing that comes off the side of your carriage and you step down from the carriage and head inside. The butler, Archibald, is opening the door and bowing and the head servant, Arthur, is saying: “Hello, my lord/lady.”

“Ummm, it’ll be right out, my lord/lady,” says Arthur, “Augustus is getting it ready just now.”

You scoff and head to the dining room. Your shoes squeak on the newly polished floor, and you know you need to yell at someone for leaving it so wet. “Dude, Arthur, why the fuck is the floor wet?”

“Sorry, sir/madam,” says Arthur, “I’ll get to drying it, straight away!”

You enter the dining room and sit down on a plush chair. The cook, Augustus, brings out the meal. It’s spinach risotto, your favourite.

“Hmmm Augustus,” you say, “this risotto is the bomb.”

“Thank you, my lord/lady,” says Augustus, who is built like a barrel and sports a thick, black moustache.

After dinner you plod upstairs, ready to fall into your massive bed and pass the fuck out. You open the door, walk to the four post bed (which has those fancy drape things hanging from it), and fall backwards onto it. Ahhhhh. Soon, you’ll have to call in a servant to help you get undressed, brush your teeth and do all that boring self-care shit for you, but for now… bliss.

You bolt upright and run a hand through your hair. It comes away dripping with white, thick ejaculate. Your bed is covered in the stuff, at least a litre of it, more than you’ve ever seen in your life (except in those pornographic ink prints you used to hide under your bed back when you lived with your parents, but those weren’t really realistic, were they?).

“ARCHIBALD!!!” you bellow. The butler bolts into the room.

“Sir/madam,” he exclaims, “what’s the…” He sees the sheets, and blanches. “Have you had an accident? I shall call for Arthur to fetch you new sheets at once!”

“Stop. Stop. Stop,” you tell Arthur, “it doesn’t matter anyway. Archibald, get all the staff here right now. I didn’t have an accident, you fucking idiot. The shit’s in my hair! We’ve gotta get to the bottom of this.”

Soon, Archibald returns with Augustus, the cook, Adolphus, the carriage driver, and Ass, the stable boy. Arthur, who has been hopping from one foot to the other expectantly, joins the four of them in a line.

“Alright,” you hiss, “one of you creamed my sheets…”

Gasps reverberate throughout the room.

“Yes, that’s right,” you continue, “and since all five of you are gasping, one of those gasps is fake. Fuck you, whoever’s out there fake gasping. I’m going to find out which one of you did it. I mean, Jesus Christ. Look at that shit!” You point to the bed, which is covered in semen. You didn’t notice initially, but it’s straight up covered. Some is even dripping from the drapes on the side.

The assembled servants are silent. You begin to pace the room, heels clacking on the tile.

“Archibald, where were you just now?”

Archibald scratches his head. “I was in here… then I left to get the others.”

“No, idiot. Before that. When my sheets were getting spunked on. When I was out at the salon.”

“Ohhhh. I was, ummm… baking the risotto,”

“Augustus, was he helping you bake the risotto?” you ask. “You know, I specifically said only the cooks were to be allowed in the kitchen.”

“Yes sir/madam, the risotto was baked with help from Master Archibald,” says Augustus sheepishly. “I let him help because he said he was lonely. He gets like that sometimes when you’re gone.”

You eye Archibald, who blushes. He has been a bit different recently, you think. Could he have been having a tug thinking about me?

You look back to Augustus, and notice a few strands of white liquid dangling from his moustache. He sees you watching and wipes them away quickly. Hmmm. His thick, beefy frame might be able to produce a lot of ejaculate. But why would he have it on his moustache?

You turn to Adolphus. “Where were you, Adolphus?”

“Okay, okay, okay! We get the picture,” you say, holding up your hands. “Jesus Christ, Adolphus. Nobody fucking cares.”

“What about you, Ass?” you ask, “taking care of the other horses like you’re supposed to?”

The stable boy, a lad of fourteen, scratches his neck. “I’m sorry sir, I was idling off, to be quite honest.”

“Yep,” he says. “I got the horses fed and brushed early, the others were out with Adolphus on the carriage. So I went out to the yard to relax and stargaze.”

Bloody hell. What kind of layabouts am I employing around here?

The smell of the spunk is making you nauseous. You need to get to the bottom of this mystery, and fast.

The head servant shrugs, scratching his head. “I was doing the laundry.”

“Yeah. That’s where I got the fresh sheets.” Arthur shifts from one foot to the other. “I mean… before that I was outside…”

“Well…. I was hanging out with Mary, the seamstress.”

“You were with Mary, the seamstress? My ex-fucking wife?” bellows Archibald.

“It’s been four years!” shrieks Arthur. Archibald runs at him, but you jam yourself between the two men.

“ALRIGHT!” you yell, “I’ve heard enough from you all. You’re a bunch of goons, but one of you is lying. I’ve had a think and I’ve figured it out! I know who spunked in my sheets."