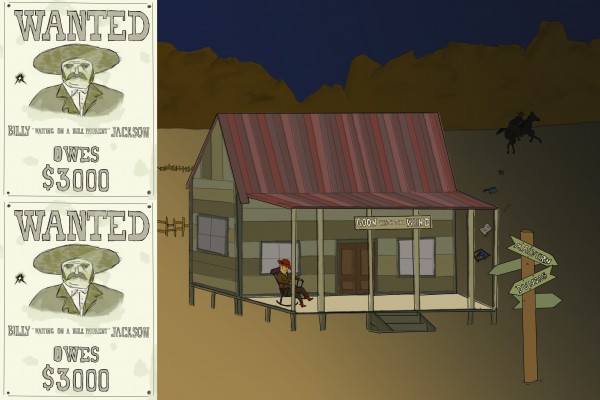 Left in the Lurch: What Happens When Your Flatmate Stops Paying Rent

There are a lot of ways to waste your money (daily coffees, essential oils, cheap shots that are mostly syrup, fancy peanut butter from the Farmers Market). But there are none worse than paying off the rent that your flatmate didn’t pay. Ari Cameron-Smith lived out that scenario. This year, he had no savings left by O-Week. That’s because in 2018, one of his flatmates ditched their Leith Street flat and disappeared, leaving the rest of the flat to pay close to $4000 of outstanding rent.

This happens every year in North Dunedin. I spoke to several students about their struggles. All of them were in the dark about their liability. A standard lease agreement includes a clause that makes tenants “jointly and severally liable,” but most tenants don’t know what that could mean when shit hits the fan. Even if they have thought about the agreement, they’re often still shocked to find out that the default position is tenants paying rent for their flatmates, on top of the rent they’ve paid all year.

When one of Ari’s flatmates returned to his hometown because of a family illness, they needed to fill the fifth room. They found Billy Jackson* on Facebook. “Everything was pretty sweet at the start, nothing off-putting about him,” Andrew Hurley, another of Ari’s flatmates, told me. He signed the lease, but stopped paying rent a month in. He never ended up paying bond. “We hit him up a lot,” Andrew told me, “but every time he would say that he was getting a bulk payment [from work] and not to find another flatmate”. The missing rent built up pretty quickly. “This caused extra stress for all of us last semester,” Ari said.

When a landlord knocks on the door, asking about missing rent, tenants tend to freak out. In a different flat, on Malvern Street, two tenants left. The arrears (the missing rent) ended up at around $2000, with the remaining flatmates evicted before the end of their lease. One of the remaining flatmates, Henry Cox-Herring, said that having two flatmates leave without explanation “really stressed out my partner and ruined our relationship”. They are no longer together. Many of the tenants I spoke with are no longer on speaking terms.

Legally, all of this is above board. Even if the tenants have virtually no power over the content of a lease agreement and just sign it because they want a roof over their heads, they still did sign an agreement with that clause. So they’re liable for their missing flatmate’s rent. That doesn’t make it right or fair. There’s a goal behind the process. The goal is: fuck the tenants, let’s make sure the landlords get their money.

Another Otago student found herself in a similar situation on Dundas Street, with $1800 in arrears. One of her flatmates left early in the year and they struggled to find a replacement. “It was extremely stressful,” she said. “Most of my time when I should have been studying for exams was spent trying to find a replacement or contacting the property manager.”

Ari described trying to get rent from Billy as “an ordeal”. Eventually, the unpaid rent mounted up to over $3700. Edinburgh Realty, their property management company, organised mediation. After admitting that the unpaid rent was his, Billy didn’t show up. The mediation couldn’t move forward.

“Nothing was really taken on board by the landlord as to our situation,” the tenants from a separate flat on Arthur Street told me. Their flatmate moved home and found a replacement flatmate through his rugby club. The replacement only paid rent for about a month. Their landlord wouldn’t listen when they said the situation was between the original flatmate and his replacement, and kept coming after them for the missing rent. Then the case ended up in the Tenancy Tribunal.

“It was an absolute stitch up,” one of the Arthur Street flatmates told me. Their new tenant completely ghosted them. His name wasn’t on the lease so he knew he wouldn’t have to pay. When their landlord filed in the Tenancy Tribunal, their original flatmate, who hadn’t lived in the flat all year, ended up paying the shortfall. The other flatmates believe he ended up paying around $3000. “We all felt like it was quite unfair as there was no support around getting money off the person who owed it.”

“When it came time for the mediation and tribunal, no one could get in contact with him and we were made to pay all his rent,” Andrew, one of the Leith Street tenants, said. By the time that Edinburgh Realty filed for rent arrears (unpaid rent) in the Tenancy Tribunal, Billy was avoiding all contact from his flatmates and the landlord. “Despite the guy telling the property manager he would be happy to take the full cost of what he owes, the landlord chose to take the bonds and extra money off the other people.” The remaining flatmates lost a total of $3780. Ari said that receiving the order was “a big learning experience for all of us”.

It’s the reliable flatmates, with money to pay, who become the targets of the Tenancy Tribunal orders. The order given against Ari’s flat named all of the tenants who signed the lease. It didn’t specify which flatmate should pay. A catchphrase appears in the Tribunal orders from all of these cases: “If the tenants have an issue with who actually owes the arrears then this is a matter they can pursue in the Disputes Tribunal, because it is a tenant/tenant issue.” That’s the legal equivalent of throwing your hands up in the air and saying: “It’s not my problem, go away.”

Those orders are accurate; the role of the Tribunal in these cases is to make sure the landlord gets paid. The Tenancy Tribunal, despite what its name might suggest, doesn’t have the power to distribute that burden fairly between the tenants. The students I talked to were forced to pursue their missing flatmates in the Disputes Tribunal.

Amid her studies, the student from Dundas Street is hoping to put forward her case in the Disputes Tribunal. There’s no other way for her to get the money back. “As a student, I barely have the money to live, let alone be paying back money that I shouldn’t be.”

The Disputes Tribunal was also frustrating for one of the Malvern Street students. It’s time-consuming, she has to pay a filing fee, and it’s difficult to make the time to mount her own case on top of studying and working. “I have to pay money to launch this tribunal [case] with no guarantee that I’m even going to get anywhere.” She has now moved into a boarding house where rent is paid on a room-by-room basis. “I made sure not to make that mistake again.”

I asked some Dunedin landlords for comment about the current rent arrears process. “There is nothing duplicitous in this and it does give the landlord protection which is necessary for his/her large investment,” said John Hornbrook from Edinburgh Realty. He also commented that renting on a room-by-room basis carries with it difficulties, especially when it comes to dividing up the power and internet costs. He said it often works out to be more expensive for tenants per week. Darlene Johnson from Property Scouts told me that “tenants may think that we are being unreasonable, but in actual fact we are simply working inside the bounds of the RTA [Residential Tenancies Act]”.

However, working within the bounds of the law is not enough to make life fair for tenants. “There should definitely be more actions and inquiries into why someone isn’t paying,” said the student from Dundas Street. “Otherwise people can just up and leave like he did and cause a world of stress for those left to clean up their mess.”

When I asked whether he would try to get his money back in Disputes Tribunal, Ari seemed resigned to his fate. “I don’t have the time or money currently to chase it up,” he told me. Ari has asked for advice on his case, but an order seems hopeless in his situation. “He doesn’t work or have any money, so even if the [Disputes Tribunal] orders him to pay us each back, he can’t if he physically has no money.” Ari knows that he’s entitled to the money – obviously having to pay someone else’s rent is unfair – but an order doesn’t necessarily mean that someone will pay. “He [would] technically have to pay us eventually, but there’s no guarantee of when that could be.”

When a flatmate stops paying, the remaining flatmates lose out. They pay their own share of the rent, go through the stress of having to cover the missing funds by finding a new flatmate or paying extra rent, and are left pursuing an unreliable person for potentially non-existent money. It’s a terrible situation. But isn’t it nice that the landlords still get paid?