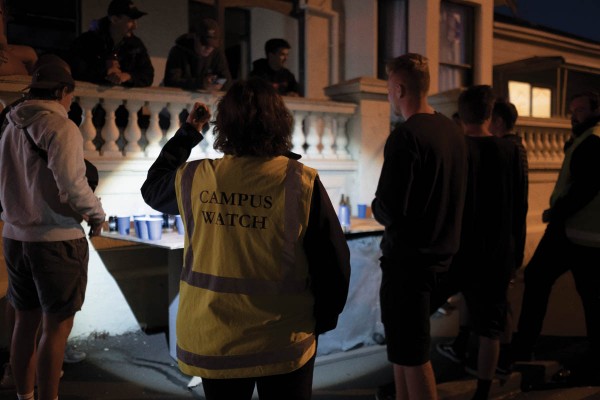 “We’re not expecting a big night,” Pete from Campus Watch tells me, making a bold prediction that turns out to be way off the mark. We’re standing on the corner of Albany Street and Forth Street, watching a procession of drunken students in Highlanders jumpsuits leaving the stadium. “Usually people go off home after the rugby and not much happens.” Pete is wrong; my night will end with the police clearing Leith Street because two people, including a police officer, have been bottled. As it turns out, Campus Watch are not always right. But after trying to keep up with their walking pace, I have a lot of respect: their job is fucking exhausting.

The night begins at the Proctor’s Office, a place I’ve never been before. The foyer is reminiscent of a police station. I am buzzed in through a side door. I walk up some stairs and find Steve, an ex-cop and the leader of the team I will be joining, sitting alone in the break room. He is surprised to see me (I was apparently meant to stay downstairs until someone came up with me) but is friendly anyway.

Campus Watch is big. Steve tells me that it has doubled in size since it started eleven years ago. There are five teams of eight people, named after the phonetic alphabet: Alpha, Bravo, Charlie, Delta, and Echo. Steve is the leader of Team Charlie and has worked for Campus Watch for nine years.

We have a Team Charlie safety briefing at 8.45pm, which involves having a chat about where to go for the night. Dave, one of the team members, is away so there’s a bit of pressure (he’s “allegedly fallen off a ladder again”). There’s a list of parties on, and the Traffic Light Party is a hot topic. Campus Watch haven’t figured out where it is at this point, but they’ve heard it will be big. “Other than that we’ll just look after people and do what we do,” Steve says. All of the team want to be assigned to the safety car, because walking around the streets of North Dunedin is cold and boring. Pete and Annabel lose out. They’re going to have to walk around with us.

We head downstairs and get to see the mysterious CCTV control room, but only after signing confidentiality agreements. All I will say is that there are a lot of cameras and the images are very high definition. Campus Watch need the Proctor’s approval before showing anyone the footage. When the Dundas Street Dairy was robbed, they couldn’t show the police the footage until the next day. “Even if the police ask, you can’t show it to them.”

One team member, Michael, stays in the control room for the night. He will radio us if he sees anything on the CCTV that we need to check out as well as taking calls.

Annabel hands us high-vis vests and pocket-sized torches, and the shift begins. We exit via an inconspicuous door in St Dave’s – one that I’ve always thought was a cleaning cupboard – and set off into the night with Team Charlie. I feel official. A bus of high school boys wave at us. Students give us nods of respect. I am intoxicated with the power of the hi-vis/torch combo. But other than that, I’m stone cold sober. And drunk people are truly hell when you’re sober.

Team Charlie, unlike me, are good at dealing with drunk people. Annabel and Pete stop to play beer pong with a flat of guys on Hyde Street. Annabel is jovial and chatty, and has an aunt-who-makes-supportive-posts-on-your-Facebook-wall vibe. Pete is chill and seems like a student. He’s also massive; he almost walks into the top of a bus stop as we walk around. At least five people greet him by name throughout the night.

We loop down to the stadium, which is totally dead by this point. I ask what we’re looking out for. “Anything that seems a bit off, people who look out of place,” Annabel tells me. Whenever we see people standing by themselves, she asks them how they’re going. Often they ignore us or just grunt in acknowledgement, but no matter what, Annabel says “Just let us know if you need anything”.

There’s a party at The Lodge on Union Street. We stand across the road and check it out. “Seems like a good vibe,” Pete comments. A lot of Campus Watch duties involve standing around. Steve reckons that “just being seen” does a lot of their code of conduct enforcement work for them. “It’s prevention – standing on corners, standing by parties, shining torches, and saying ‘Stop that!’ rather than trying to get involved in things.”

Pete gets a radio message; someone needs a walk-home from Cumby. We walk over to the hall, and find a group of girls waiting in the foyer. Charlotte’s friends are going to town, but she wants to go home to her flat on Castle Street. She’s an exchange student from California. Her friend fixes me with an intensely drunk stare and says “If you let the Mongrel Mob rape her, I’ll probably die. I feel so responsible and I’m trusting you. If anything happens to her, I’ll sue you.” She then asks us for directions to Starters, which somewhat alleviates the threat of legal action.

We walk Charlotte home. Her friends have kicked over some glass bottles outside Cumby, and Annabel gives such a disappointed “Oh come on, girls” when she sees this that I start to wonder if I should pick up the glass. Charlotte is impressed that Campus Watch exists. “It’s cool, I don’t think my campus back home has this.”

A smiling, Gloriavale-type girl from Student Life offers us a snag at the start of Castle Street. We get to skip the queue. “Knuckles, Campus Watch,” yells a guy in a Yankees t-shirt before fist bumping all of us. “You guys are legends.” Throughout the night, about eight people come up to us and express their love for Campus Watch.

We’re starting to walk another girl home to George Street when Pete gets a message on the radio. Immediately, he turns and legs it towards Leith Street. At about the same time, a police car with sirens screams past. An ambulance follows about two minutes later. We reach The Castle and there’s a guy in handcuffs. His friends are outraged.

The police don’t really tell Campus Watch what happened, but we know that there’s a policeman being driven to hospital who will need stitches in his leg. There’s a lot of confusion, and apparently there was a foot chase at the end of Leith Street. Annabel thinks someone has stabbed a cop; Pete is pretty sure it was just a bottle, and that it was thrown up in the air before it made contact. I talk to some people yelling at the police. Their friend, who hasn’t bottled anyone, is in handcuffs for obstruction of justice. He wouldn’t get out of the way when a cop asked him to. “He was trying to stop us from doing our lawful duty,” a policeman explains to a concerned friend. “But he didn’t even do anything!” they insist.

Garry, the leader of Team Delta (who have an overlapping Campus Watch shift), is looking after a girl with a bleeding head. A bottle has hit her, too. The hair around her face is streaked with blood. We sit on the kerb with her and her friend while we wait for the ambulance to arrive. She’s sobbing and keeps touching her head in disbelief.

Noise control arrives for the third time and the music stops. The party lights, rays of red and blue and green, seem out of place without an accompanying throb of drum and bass. The DJ, in what could be classed as a pretty bad decision, starts chanting, “Fuck the cops”. The chant goes for about four repeats before fading out as the police swarm the flat. Partygoers are pushed onto the street and disperse in a haze of alcohol.

There are now thirteen policemen on Leith Street. They form a line and walk towards the students, moving the crowd towards the Dundas Bridge end of the street. Anyone who walks past the line-up will be arrested for obstruction, they tell us. A girl called Sammy tells me that her flat is just on the other side of the line. She’s not allowed to walk back to it. A lot of the people on the street claim to be in the same situation, but the cops won’t have a bar of it. “We are going to clear the street, if you’re here you’re going.” The policeman points at the paddy wagon as he says that. It’s a clear threat of arrest. So people start to move on, pushed off the street by a line-up of police and a few Campus Watch staff.

It takes a long time to get everyone off the street. A guy pees into a hedge, unaware of what’s happening until Annabel asks him to move on. “But whyyy?” he asks. And then it’s over. The street behind us is drained of all life, apart from the students who have only just made their way around the block to get back to their flats. On the deserted street, about ten metres in front of a full line-up of uniformed police, two freshers are intensely making out.

Things are quiet. The cops drive away. “Time for a cup of tea?” Annabel asks. We nod.

We return to St Dave’s and visit Michael in the control room before heading up for some hot drinks. He is frustrated by the volume of unnecessary requests for the safety car. A lot of people ask for a ride validly, but it makes the job difficult when some people use it as a taxi. It can be hard to figure out whether people actually need help or not. “We might take you to Maccas, but we won’t drive you to town. It’s about getting home safely, it’s not a taxi service.”

It’s 1.30am. I am so tired, despite the numerous coffees since 8pm. We’ve walked about 10km. My legs are sore. I think I’m getting a cold. Campus Watch still have over five hours to go. Their ten-hour shift will finish up at 7am. As I write this, wrapped in a blanket with a glass of rosé, I’m thinking of you Campus Watch, doing a job that is most people’s worst nightmare. 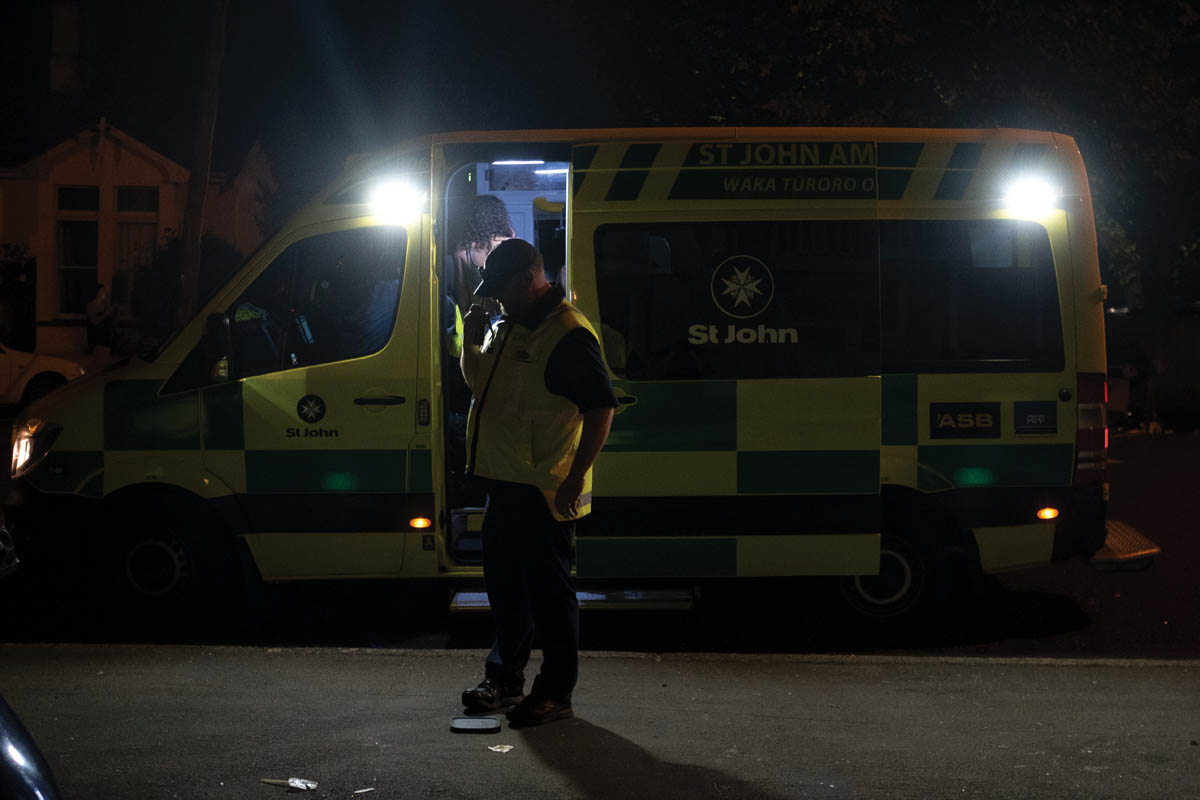