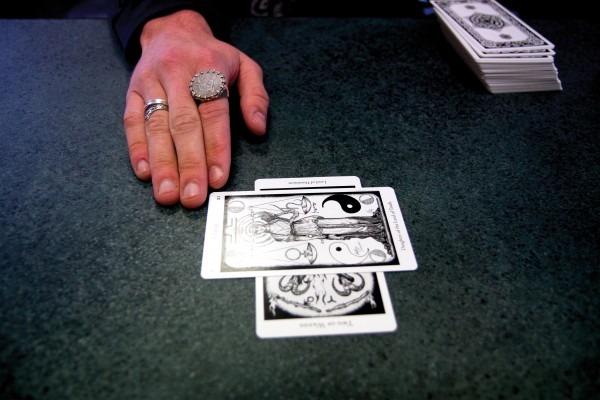 With a nervous gait, Harlene approaches my table of destiny (we couldn’t actually get her to do it, so we just got Chelle to pretend to be her). Trembling, she sits down. Harlene is seeking divine answers. I tell her I am most willing to oblige (for international fees). Harlene reluctantly complies, brandishing a wad of Sir Erns from her bosom. With the money on the table, she proceeds with her question:

“How is my role within the University going to fare next year?”

Well Harlene, I say, let the cards fall where they may…

The Two of Wands represents the dominion you have over the university. However, the card is reversed, indicating a turbulence or sadness associated with the dominion at the present time. Are you maintaining a good relationship with the students? The faculties? I sense a lot of tension with your present dominion over the “universe-ity”.

The second card represents the immediate influence that has brought about your present position. The card is Justice reversed, meaning there have been possible biases and inequity when making decisions. Have you made sure due process within the university has been followed at all times? I sense that the possible turbulence with your dominion is directly due to biases and inequity influencing your decisions.

Card 3: (Goal or destiny from the first two cards)

A complex card, the Foolish Man depicts a person standing at the precipice, ignorant of the impending danger of the crashing waves below. The destiny that is to come about from the present position is one of ignorance and folly. Harlene, the cards tell me your destiny places you standing at the edge of an immediate danger that you are blind to. I suggest caution with rough seas.

This card helps determine the past foundations of present position, i.e. where your current position came from. The Seven of Wands is reversed, meaning that there has been many unrealised victories in the past, possibly only minor victories. You have encountered many obstacles in your past, I grant you that Harlene.

The recent past event card provides further foundation for the present position. The Seven of Swords indicates failure to gain full success, even when the success is within grasp. For you, Harlene, the card is reversed - suggesting an inclination to spy on others, possibly leading to your lack of victory or success. Have you been breaching privacy within the universe-ity? The present position may have been affected by your celestial inclination towards an unstable effort.

Never fear Ms. Hayne - good times are a’ coming. There is a light in your foreseeable future that will bring gain and riches. Just be aware that this position can breed arrogance. What is the point of gain if nobody believes in what you have achieved?

You have a profound effect on your environment, Harlene. The Three of Pentacles indicates that your influence on the university is one of material gain and increase of commercial status. The gain is of high quality but may be at the expense of non-material successes. Make sure you do not undermine more intangible gains, like those of respect and love for humanity(s).

The Knight of Swords as your inner emotion card indicates you have an affinity for leadership. The card indicates your positive traits of bravery and courage. However, the Knight of Swords also commands traits of subtlety and understatement. The inclination to obtain power through subtle means may be interpreted by others as sneaky or conniving. It may be wise to make sure people are reminded of your valiant intentions.

The final card will give an overarching view or outcome of the cards before. The Hanged Man is a telling omen, but reversed even more so. In its usual state, it indicates an impending sacrifice or punishment, possibly just. Reversed, it means that there is a failure to give one’s self, or the sacrifice is not enforced. Harlene, your position has indicated strife with the universe-ity due to inequity from a past of missed opportunity. You have the power to change this with your valiant traits and your influence for material gain. The Hanged Man suggests a position where you may not be giving the whole of these traits equally. A sacrifice may have to be enforced in future if the current position is maintained.

Your present position indicated a dominion riddled with inequity and turbulence. The past foundations told me that you and the universe-ity have not experienced the full success that you may have been expecting. The cards told me that this could be due to a lack of effort in fully realising goals. However, the future influence indicates that success and gain are to come. The destiny from this position is one of foolishness and folly. Harlene, I see you in the future within the universe-ity, standing at the precipice of the crashing waves below. I must implore you open your eyes to the bigger picture of the cosmos around you.

The cards have told me that you are in a good position to do this. You hold valiant traits of courage and bravery - do not let them go to waste in your inclination towards power. The result could lead to a future sacrifice that will be enforced on you. Do not let the crashing waves overcome you.