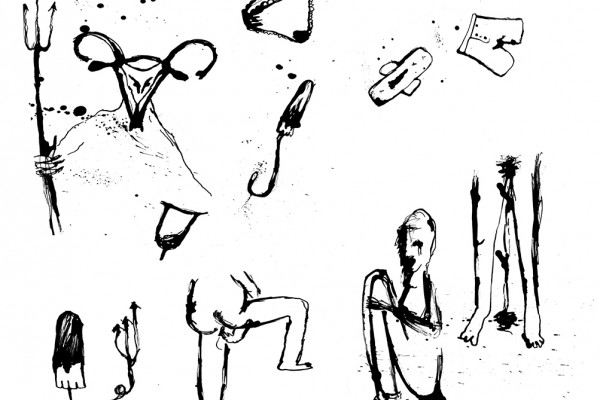 Bleeding like a stuck pig for approximately 1/6th of our lives (which is around 15 years of solid bleeding, btw) isn’t an awful lot of fun. So just for a moment, let’s rejoice in, or recoil aghast at, these tales of menstrual treachery that our readers have so kindly shared.

I fell asleep at my aunt’s place in Remuera (the rich suburb in Auckland) while watching TV on her expensive retro leather couch. I was on my period. I bled right through my pants onto the leather and it soaked in there overnight! In the morning I was absolutely mortified and had to try and scrub it off. The stain is still there to this day.

Was on a day trip out on a boat while on exchange in France and I had my period. I had to change my tampon but there was no toilet on the tiny jet boat and we were moored just off an island. My host sister distracted her family friends while I crammed a plastic bag and tampon under my hat, then I got into the water, swam to a fairly large rock about 100m away, perched behind it and did what needed to be done. No one noticed. Proudest period moment of my life.

My mum and my godmother took me out to dinner at the most expensive restaurant in my hometown when I first got my period to celebrate womanhood. They also bought me three books about periods and womanhood. My family is not very well off, so that was pretty special.

I don’t know how it came up, but a male friend of many years asked me how on earth females knew they had their period. I thought he was crazy. “Uhhh, we bleed???”
He was confused. “But don’t you wear tampons?”
“Yes...when we get our period.”
The poor lad thought females wear tampons 24/7 to catch the period blood when it first starts, and then we change our tampon at the end of our period.
This boy has had a girlfriend since Year 12.

I had an extremely heavy flow in high school. Mini tampons did SHIT ALL, regular tampons were borderline ok, but supersized jumbo tampons were MY BAE!
One day a girl asked if I had any spare tampons, I handed her a supersized one. She yelled out "OMG THAT’S HUGE! How does that even fit?" To which I responded, "Well you can fit a fucking penis in your vag so I'm sure a tampon will be fine!"

I got my period for the first time the day before I had to head off on a snorkelling camp for Year 12 Biology. It was just the worst. I obviously didn't have my mum with me on the camp, so I didn't know what to do. I had no idea how tampons worked, and I thought I had to change my pad every time I peed. Worst of all though, I was utterly convinced that sharks would sniff out my blood and eat me. I'm still terrified of snorkelling.

I was about nine when I first got my period (rough I know). I was at school and noticed some brown stuff in my bloomers when I went to the bathroom; I was 98% certain I had shat my pants and to make matters worse the ‘poo’ had leaked into my jeans. Let’s just say I spent the rest of the day with crossed legs, 2m from anyone and extremely ashamed of myself. I went home and told mum about the disastrous event, desperate for answers on why a perfectly potty-trained tween pooped her pants. Ma took one look at my panties and said “oh hun, it’s your period”.

Once, I accidentally had sex with a tampon in. During sex, my boyfriend made the comment "I feel like my dick is hitting the back of your vag," and we had to use heaps of lube. You would think it would have been obvious, but my tampon turned sideways and was pushed very far in. Surprisingly we still both managed to orgasm!

My sister was on her period and she hasn’t started using tampons yet so it’s all pads, poor girl. She was at volleyball practice and told me that everyone kept asking each other “why does it smell so much like fish today????”

My first period started about an hour before my dance class. Not great for a self-conscious teen having to wear a pad with lycra leggings and a leotard! I very quickly learnt how to use tampons after that.

Moon cups are great. Just make sure you aren't a clumsy idiot who lets it fly out of your fingers when you've just pulled it out to splatter its contents all over the bathroom wall.
Also, once you've cleaned up the murder scene, don't describe it to your flatmates in gory detail if you ever want them to look at you the same again. They also won't appreciate jokes about saving the blood to make black pudding for flat dinner.

In third year my girlfriend came back from a holiday overseas and of course we had plenty of celebratory sex. At this point in the relationship we had stopped using protection, but she had sworn to me that she was always onto it when it came to taking the pill on time each day.
Then, her next period was late. This lead to the typical pregnancy scare. Now contrary to popular belief, the pee-on-a-stick pregnancy tests require you to wait a couple of days after your missed period before they can give you a reliable answer.

In that time she confessed to me that:

And that my friends is how a late period ended my relationship.
(P.S. it turned out she wasn't pregnant)

I was at a BBQ in first year and thought I'd finished my period. Plot twist – I hadn't. I didn't have anything to wrap around me or cover the wooden bench I was sitting on and was fucking mortified. I told a friend what had happened, but we were both too drunk to think logically, so she got me a bottle of tomato sauce. Hey presto, I cover the part I'm sitting on in sauce and sit in it. It bought me some dignity with the blokes at the party, but unfortunately brought more attention to me on the walk home!

I'd just arrived back from a holiday and went and stayed at the bf's house. I'd been on my period the week beforehand, and the air pressure on the plane must've held what still remained up there briefly until we got to that part of the night where he would enjoy three minutes of bliss and I disappointment. He poetically uttered the words "it feels wetter than usual," and I gasped, yelled "pull it out!" and he did so. With a dick redder than Russia during the Cold War, he ran to the shower and cleaned up. I hope other people enjoy period sex, just put down a towel huns.

Before I sought medical help, my periods were so heavy that on a 40-minute train trip (after just changing my pad and tampon) I bled out onto the train seat! A very embarrassing and humbling experience.

So, when I moved to New Zealand from America, I always got in trouble in English class because Americans call the punctuation at the end of a sentence a period, but New Zealanders call it a full stop.

I had just started a new job, in a male-dominated field. I'm talking 1 female to every 500 guys. This means sharing the portaloos at the job site with a bunch of dudes (grown men, not boys). Men that leave weird smells, unclean toilets and like to draw dicks on the wall. So I head to the portaloo to change my tampon like any other day. I was just about to insert the new one (whilst having a good laugh at the array of permanent marker dicks on the wall) and it was getting a bit stuck, so I turned around to face the back of the loo so I could put my leg up on the toilet to make it a bit easier.

Next minute, someone comes up and pulls on the door to see if the loo was free, apparently I hadn't locked it properly. So the door swings open, and a line of guys get a view of my bare ass and me with my finger up in my vag. To make things worse, I was facing the wrong way to shut the door quickly, and the guys were too stunned to think quick enough to shut it for me. So I had to finish the tampon insert before I could shut the door. Probably the most embarrassing thing in my life - a bunch of dudes watching me change my tampon.

I have been using a menstrual cup for a few years now with no problems at all, but recently had a major technical malfunction. At Christmas, I was on my way to visit my grandmother for the afternoon, which included being dragged along to her very traditional and conservative church for a choir concert. I was running late (as per usual) and sprinted down the street to make it to the bus stop on time. As I was running, I felt a weird popping sensation and realised that my menstrual cup had unsuctioned itself from my cervix and blood was leaking profusely with each stride! I made it to the bus stop and stood there silently panicking and praying that I wouldn’t end up with blood all over the back of my dress. As soon as I got to my grandma’s house, I rushed into the bathroom to deal with the situation and there was so much blood it honestly looked like a fucking murder scene. In an act of desperation, I stripped off my undies and tights, which were soaked beyond redemption, and cleaned myself up as best I could. I didn’t have a change of undies so there was no other option but to go commando for the rest of the day. Sitting through a three hour choir concert in a church full of elderly people sans underwear while on my period was supremely awkward (although admittedly not the most outrageous thing I have ever done in a church).