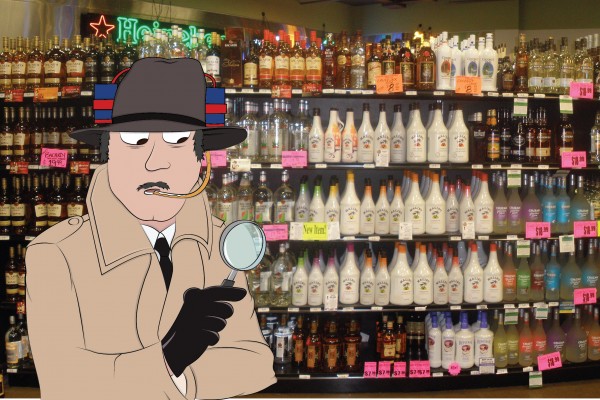 Life on the student allowance is a constant struggle to balance those optional extras, like rent and food, with the essentials, like caffeine and alcohol. The ultimate goal in life is to get fucked up without fucking up your finances. You want to drink to forget your money troubles, not create new ones.

If you’re wanting to get your money’s worth of alcohol, any self-respecting student needs to have an experienced grasp on the magic ‘dollar per standard’ formula.

Don’t be fooled by the number of bottles in a box, or the flavour, or any superficial shit like that. No one cares about that. All you need is standard units of alcohol. The more ethanol you can neck for less, the better your life will be.

For the purposes of this Investigative Investigation, we will be looking for the cheapest alcohol readily available within the Dunedin city limits in 2018. We will not be taking into account any limited-time discounts, only standard pricing. The product must be consistently stocked and available at all times of the year.

While I have been a long time worshipper at the altar of The Church of Southern Gold, the glorious god has abandoned us. The tins are bronze now, and the price has ticked up to an absurd $30 for a tray of 24.

Swap-a-Crates are a thing of the past. Their only value is to make sweet furniture and the novelty of Crate Day. Even when you include the discount for returning your bottles, they’re still very rarely worth it – unless you re-use the empty bottles for homebrew.

But there is one brave soldier who is always steady at the buck-a-standard mark, unwavering in price, and delivering shockingly good taste. That beer is Krombacher, it’s a German pilsner and it’s only available at Countdown. It’s on price lockdown at $30 for a 12-pack of 660ml 4.8% beers. The maths on that is 28.5 standards, or $1.05 per standard.

Technically though, Krombacher is just pipped at the line by Ranfurly Draught, sold at Countdown for $25 for an 18-box of 440ml cans, totalling 24 standard drinks. By that count, you’re at $1.04 per standard.

So the winner on the day has to be Ranfulry Draught, unfortunately. It’s an absolute nothing beer – uninspired, lazy, no aroma, even the people who make it don’t like it. Great for beer pong liquid if you have no money or self-respect, but otherwise should be avoided at all costs. Technically the Ranfurls are cheaper, but it’s less than a cent a standard more to go for Krombacher and get something which is actually nice and won’t make you regret every life choice you’ve ever made.

RTDs don’t exist as a cheap fuck, they’re a way to help children get down disgusting poison but still make it taste OK. They’re almost always a terrible deal, drank by terrible people.

Diesels are a solid option. At 330mls, this mixture of sugar and motor oil offers a bigger punch than most RTDs. At 7% and $14 for six cans it offers 10.5 standard drinks and a D/S of 1.33. Not bad by any means but certainly beatable. While Cody’s, KGBs and Cruisers all offer an easy path to diabetes, none of them are a particularly good deal on the price front anymore.

But I’ll let you in on a secret: there is one outlet in Dunedin that still sells RTDs for unimaginably cheap prices. At Meenan’s Bottle Store on Great King St, the oldest liquor store in Dunedin, you can fill your own rigger with a variety of alcohol. Among them is their own brand of ‘Vodka Ice,’ a slightly cheaper knockoff of the famous Icebreaker from the dearly departed McDuffs Brewery (RIP). Provided you bring your own bottle, Vodka Ice is 4% and costs just $3.10 per litre. That’s an incredible $1.03 per standard. And if you splash out for an entire keg, you’ll get a total of 150 standard drinks for $150 (not including the keg deposit), providing the perfect ration of $1/1 standard drink.

Straight spirits are tricky bastards. You naturally assume that because they cut down on the mixer and have only one bottle, they will be a good deal. But that’s not always the case. Smirnoff has a cheeky tendency to fool you into thinking it’s a lot cheaper than it is by dropping its strength to 37%.

From our findings, if you want to find the best dollars per standard on spirits at local liquor stores, you’ve got to drop into truly disgusting territory. Have you ever noticed how every cheap shitty liquor is 13.9%? It’s because they’re taking advantage of a government tax break for drinks under 14% that was intended to protect the wine industry.

Kristov Raspberry take advantage of that with a truly gut-wrenching drink that comes in at $12 for 11 standards, $1.09 per standard. It tastes like the sewage runoff from a Real Fruit Ice Cream shop, but it’s a somewhat decent deal if you’re desperate.

But you can do better, it’s just a bit harder to find. Way out in the depths of South D, unbeknownst to most students, lies The Dunedin Malthouse, supplier of all your homebrewing needs.  This glorious wee shop sells fill-your own spirits at $31 a litre, a fantastic price at $0.97 per standard. It’s probably just moonshine with flavouring added, so avoid drinking straight, but it’s a good time in a jungle juice.

It is worth noting that if you go to the Dunedin Malthouse and pick up some homebrewing or distilling equipment, with a bit of practice you can start making decent alcohol for way less than anything in this article.

Glass bottles are a major expense for producers. It’s tough to make the margins meet with added expense. That’s why bottle wines are never going to beat the real heroes of budget alcoholics: the goon.

Goon is the sweet, sweet nectar that binds the Australasian continent together. It’s delicious and nutritious, and the goon sack can easily be turned into a makeshift pillow when you inevitably pass out after finishing it.

The best deal of any goon widely available at supermarkets and liquor stores goes to Mystic Ridge Red Wine Goon from Pak’nSave.At 12.5% and served in a full 3 litre goon sack, Mystic Ridge comes in hot with 30 standards and costs an unbeatable $22.95.

That’s a D/S ratio of 0.765, almost unheard of in this day and age. It tastes like absolute fucking dirt. Imagine a cocktail of paint thinner and that liquid that collects at the bottom of the veggie drawer in your fridge. But with a price like that you can afford to buy a few mixers to help you sink it down. If you buy five of them you can make a massive batch of jungle juice, mix it with $35 worth of soda and juice and still come out better off than any keg.

But is it the best? That question is very much up for debate.

You see, there is one true king that nothing else can compare to. The only question is whether it qualifies.

Its name is Yalumba. It’s an expired goon available only from Meenan’s that contains21 delectable standard drinks for $9.90. That is not a typo; this shit costs $0.47 per standard. And it’s not that awful. Dry, woody notes throughout, and nowhere near as much harshness as expected. Plus you can just add lemonade and you’ll have a breezy time until you wake up in that dumpster outside the Hunter Centre.

The only thing stopping Yalmuba from being far and away the winner is whether it obeys our rules of being non-discounted and always available. The reason they sell it so cheap is that Meenan’s is buying in expired stock at a discount price. But still, the price is consistently low. And while it’s almost always there, the shelves are sometimes conspicuously bare. The bloke that works there informed me that they have a good enough arrangement that they can always order in more.

The specifics don’t matter that much. Let’s let some annoying law students argue about it. The rest of us are just going to get fucked up at 47 cents a pop.