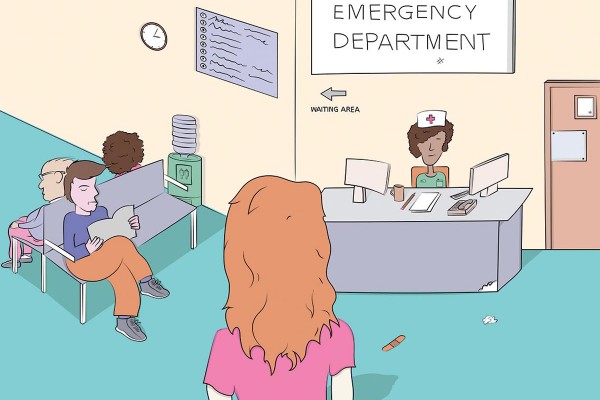 My parents may not be legally obligated to look after my drunk ass after age 18, but someone has to if I’m not going to end up dead in a ditch. Enter Residential Assistants. Soft, welcoming and with a bosom so loving that freshers can suckle lime Cruisers from their titties, RAs are the father figure in your life who finally returned from getting that pack of cigarettes.

Charlie* was an RA in 2017 while in his third year of medicine, because he wanted “to see what support there was for health sci students in halls, and help in any way I could”.

He emailed in an expression of interest, did a 10-minute interview, and the next thing he knew, he had landed the job. “They sent me the residential agreement paperwork first, which is the same as all the students get. So, you sign it, and they only send you your RA contract a month later, which outlines your pay and all that. I didn’t realise I would be losing a net $4,000 from doing the job when I signed the first lot of paperwork.”

The UniCol Residential Assistant pack, which is the same for all the University-owned halls, reads, “In 2017 basic scale residential assistants are employed and paid for 34 hours per fortnight at a rate of $16.50 per hour, or $561 per fortnight. This payment is subject to tax. The cost of accommodation in 2017 is $363 per week.”

If you crunch those numbers, an RA at a University-owned college pays between $117 and $137 a week, depending on tax, kiwisaver and student loan repayments, just to do their job.

Considering that the average cost of renting (plus food and bills) in Dunedin hovers around $200 per week, you’re saving at most around $83, which works out to a lucrative $4.88/hour.

Another RA, Michael*, said he “basically considers it volunteering. It’s not how you save money. I’m paying to work here.”

Amelia*, an RA at a Victoria University hall, said that staff pay a discounted rent to start with, which is normally fully covered by their paycheque. “400 dollars is taken off my [fortnightly] payslip, I get paid minimum wage, and then I get to keep whatever is left over. If I work more than 29 hours over two weeks there’ll be something left over.”

Sarah Boyd, a media spokesperson for Vic Uni confirmed this, saying “The rate that RAs receive is confidential, but they receive an hourly rate and an accommodation allowance which covers their accommodation in the Hall.”

But it’s not just the measly pay that wears you down, it’s the hours.

Charlie said, “You don’t have a day off, I wish someone had told me that. The contract doesn’t say that. But we were told that we’re ‘never off duty.’ Officially, we’re not meant to work more than 34 hours a week. But whenever a resident talks to you, you’re expected to be working. The excuse ‘I’m not on duty’ is not a thing that exists.”

Jamie Gilbertson, the Senior Warden of the Otago University Colleges, responded to these claims by saying “With proper approval RAs can work outside of their 34 hours. The live-in nature of pastoral care employment requires boundary management. ‘On-call’ is a more particular employment term and status of work.”

Let’s rewind for a moment, though. Before they start the job, all RAs must undergo some form of training. You know, the stuff to prepare you for the big scary job ahead; like law camp for law students, only less jelly wrestling (too soon?). Remember, this training is what separates that fuckwit in your hall who passes out naked on his bedroom floor from the guy who puts him in the recovery position.

Arana Warden Gilbertson said that RAs receive “basic training on things like first aid, how to recognise symptoms of mental health issues, handle first contact reporting of sexual assault, as well as fire warden training (and other emergencies), pastoral care with all that it means (i.e. homesickness, transition from home to the University, academic pursuits, sexuality).” From a glance, this all sounds pretty good. But how does this translate into reality?

Charlie broke it down for us: “For training, in my hall we only had two weeks together where we basically went over an RA manual, which was a big rulebook and series of expectations. The training really focused on alcohol abuse. In reality though, in my whole year we only had three cases where we directly had to deal with alcohol related problems. We needed more mental health training. The college was very firm on the stance that that wasn’t our job. Overall, it definitely wasn’t sufficient for what we were about to face. It didn’t train us to be good RAs.”

Other RAs called the training they received “lacklustre” and said it “only fuelled a basic understanding of the job to come”.

So, what was the job to come? Well, as it turns out, dealing with a shit-ton of mental health issues.

Peter* described his hall as “an incubation of stress, anxiety, and awful mental health problems” for first year students. When asked how much training RAs get for combating serious mental health problems, he said “none”. If there was any, it was a ten-minute speech sandwiched between others on international exchange programs and the class rep system.

There were reportedly at least four Otago University student suicides in 2017. It is shockingly common for RAs to have to deal with suicide attempts, despite lacking the necessary training. In one instance, an RA had to take several weeks off work and seek counselling (which they paid for out of their own pocket) to cope with the trauma of a resident making an attempt on her own life.

As Lauren*, an RA at a private college put it, “there was a large pressure on RAs to do their jobs correctly, because we felt like we were the last resort for some of these students. Which obviously should never be the case, because we are not professionals, we are just friendly young people who try our best.”

Charlie said he “spent more time in the emergency department and the emergency psychiatric service department as an RA last year than I did as a medical student. There were suicide attempts, self-harm, just terrible things, and you’re the adult in that situation. The amount of times I wound up there was easily in the double digits. Those were really long nights. And there was no compensation for those EPS nights, no extra pay or anything. It was just considered part of your job.”

It’s important to remember that RAs are still just students. They have the same terrible timetable, the same night-before assignments, the same exam meltdowns. And during all this, they have to look after about 25-30 residents. It’s like those teenage mums in high school – how the fuck do they do it?

“The first seven weeks were amazing.” Charlie said. “You felt like you were helping. But then it hits that eight-nine week mark, and suddenly you’re just exhausted. You have nowhere to go to let off steam, because the problem is in your home, where you live. The trouble is that institutions like halls think that fatigue and burnout is a personal issue, not an institutional one. All the RAs began to realise that the problems we were raising with management just weren’t going anywhere. There’s no formal complaint process, you’d just go in and talk to the warden, but nothing would happen.”

A smaller point (but one that a shitposting institution like Critic is deeply concerned with) is the impact on RAs’ sex lives. “We couldn’t bring people back to our rooms if we wanted to spend the night with them. We’d have to follow the same procedure as the residents, which involves handing in an application a couple of days before for overnight guests. But I couldn’t spontaneously stay out all night at someone else’s. Again, I would have to fill in a form.” After all the shit they put up with, it’s fair to say that RAs deserve some sex. Not from their residents, that would be very bad. But someone should probably have lovely, consensual, appropriate sex with them.

It’s clear that there are definitely some institutional problems when it comes to being an RA. You’re underpaid, sex-deprived, and dealing with some pretty intense shit.

But despite all that, Charlie said “If I had known what the job would really be like, I wouldn't have applied, but I don't regret that I did”. Bonding with your residents and fellow RAs can make it all worthwhile.

After that touching moment, I’ll leave you with this: in Charlie’s hall there were ten RAs. Only one returned for 2018.