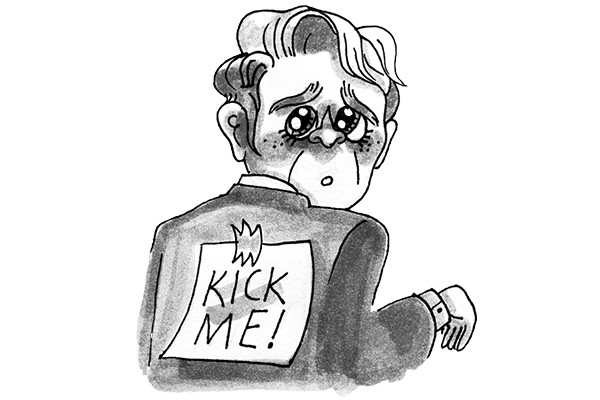 The boys are back in town... The boys of politics. Not that they ever left, mind you. But with election season in full swing, the fellas are having a much busier time than usual. Just how busy, you ask? Read on, take a peek behind the curtain, and I’ll shed a little light on what’s been going on in the world of the boys – the politics boys. Mike Hosking struts the length of his private dressing room, located in TVNZ’s Auckland headquarters. He stands in front of a full-length mirror, jouncing along to Q Lazzarus’s ‘Goodbye Horses’, which is blaring out from a boombox at a deafening volume. Pinned to all four walls of the room are hundreds of magazine cut-outs of various teen idols from recent times: Harry Styles, Justin Beiber, Zayn Malik, Zac Efron... There are too many to identify. However, most of the figures’ heads have been removed and replaced with magazine cut-outs of Mike’s own face, violently torn from Women’s Weekly and Listener issues dating back over 20 years. The eyes have all been stabbed out with a pen in an apparent rage. He is frustrated in the knowledge that he could never stand alongside them in reality – although his pants are a frayed remnant of this hopeless dream. The paper eyes have also been poked out. He wants to limit the number of witnesses to his inner world, his grim designs.

Loud banging and a woman’s voice comes from the locked dressing room door, “Please, mister! We’re on in ten minutes! If you come out now we can still make it! Please!”

“Ahh! Shut the hell up!” Mike screams at the door. He looks around cautiously before opening a drawer and removing a life-size paper cut out of his own face – eyes intact this time – with a hole cut around the mouth. He puts his tongue through the hole and waggles it around for a while. He then holds it at waist height and looks down at it for a moment. He begins to unzip his fly...

“Mister! We’re going to get Peter Williams to do it if you’re not out here in 30 seconds!”

“No! Alright, goddamn it! Shit!” Mike composes himself and puts the paper face back in the drawer. He clears his throat and stands silently with his eyes closed for a moment. Mike opens the door and his assistant is waiting outside with a clipboard. “Good evening. Climate change is a hoax. You smell very fine this evening.”

(National, Prime Minister, ‘not a crook’) It is 2:00am on the rooftop of a Wilson’s Parking building in central Wellington. Health Minister Jonathan Coleman approaches the shadowy figure he knows so well, but at the same time, hardly at all. His face is lit only by the smouldering end of a cigarette.

“You’ve seen the polls – we’re in trouble, Jonathan. Dunedin Hospital. Big press conference. One week from tomorrow. This is the real thing. Be there at 12 noon.”

“O-O-Ok Bill – I mean... ‘Bigmouth’,” Jonathan stammers. He suspected something like this was about to happen.

It is 2:00am the next day, same location. Transport Minister Simon Bridges is shivering, looking around for the man he is supposed to meet. A darkened figure appears from the gloom.

“Roads. This is the big one, Simon. We’ll do the Manawatu, and maybe some other places, but the details aren’t important. One week. Be prepared. Also, did I mention that I never ever wrongfully claimed a housing allowance on a property I had no ethical justification for? Hmm?”

Six days later, Bill English and Jonathan Coleman are holding a press conference inside the least crumbly part of Dunedin Hospital. English has asked all non-press visitors to leave. He has a strict plan to adhere to. He and Jonathan Coleman stand together and face the nation’s press as the murmurs die down. The pair give each other a knowing nod. Bill turns and produces a large bucket. The press already know what is about to happen.

“Ladies and gentlemen,” Bill announces, before reaching into the bucket and producing a handful of lollies. “Here you are, as promised!” He and Jonathan begin throwing handfuls of lollies at the news media and patients lying in their beds. “No need to thank us! But you’re welcome! We feel your pain! Your time has come!” After a few minutes the pair run out of lollies and a silence descends over the entire scene. The patients and journalists look around, bewildered and markedly unimpressed. A muffled but growing protest chant can be heard echoing down the corridor.

It is the next day. On a roadside somewhere in the lower North Island, Simon Bridges and Bill stand before the nation’s media. They give each other a knowing nod and Bill turns to his aides, who one by one trot out ten large buckets. It is early June 2017. The right honourable Father of the House, Peter Dunne, is reviewing some medical cannabis cases in his tidy Wellington office. As associate health minister, it is his duty to review and confirm all appropriate cases that arrive on his desk.

“Now, let’s see ... Chronic pain ... IBS ... Legal weed is approved.” Peter mutters as he bangs a big rubber stamp on the front of the document and moves on to the next one.

“Hmm ... Sprained elbow... Skiing injury ... Dank nugs denied!” Peter blubs. When will people take this powerful and potent medicine seriously? Luckily Mr Dunne is here – the thin blue line in a bow tie – to keep New Zealand healthy and responsible. On to the next folder...

A call comes through from his assistant.

“ – Yes, Mr Dunne, your doctor has just confirmed your appointment for 4:00pm today.”

It is later that day and Peter is speaking with his GP. “Yes, Doctor, it’s my wrist. All this stamping has really taken a toll. Also, being submerged in this world of approving and denying cannabis derivatives to patients all day is really affecting my mind. When I close my eyes all I can see are cannabis plants growing out my fingertips, and all kinds of other freaky things. I get nightmares about enormous police officers made out of thick buds arresting me and putting me in weed jail. Just this morning I called my assistant Samantha, ‘Sensimillia.’

“Hmm,” the doctor thought aloud. “Let me see what I can do.”

It is the next day and Peter is stamping documents in his office again. He sighs.

Peter flips the folder over and on the cover is written: ‘Patient – Mr Dunne, Peter. Application for medical cannabis subject to approval from the Associate Health Minister. Wellington, New Zealand.’

Peter’s hands begin shaking as he stands over the folder, holding the rubber stamp. His assistant opens the door to find him violently and repeatedly hammering down on the document with the rubber stamp chanting, “Weed! Lol! Weed! Lol!” Chris Hipkins is walking quickly down the marble halls of parliament, clutching his books and paper documents close to his chest. He scurries along, looking this way and that – on the lookout for trouble. He has received a lot of flak from the media on both sides of the Tasman recently, and is constantly watching his back. He played a small, but nonetheless integral, part in the outing of Australian Deputy Prime Minister Barnaby Joyce as a New Zealand Citizen (which, in the extremely open and tolerant land of Australia, is a big no-no). The cabal of the Australian Liberal Party and the New Zealand National Party is the most powerful in the Southern Hemisphere. And all it took was a phone call.

“There he is! Get him!” a voice cries out behind him. It is Minister of Foreign Affairs Gerry Brownlee. He and several suit-wearing henchmen grab Chris and carry him to the ministerial bathrooms.

“P-P-Please guys! This is all just a big misunderstanding!”

“All this dirty politics... You look like you could use a shower, Chris!” Gerry bellows. “Flush ‘em boys!”

Chris’s screams of protest echo down the marble halls as the fellas lower his head into the bowl and flush until the water is all gone. “Ahh! No!”

It is later that day and Chris is walking back to his office, still damp and uncomfortable. He rounds a corner and runs into Labour Leader Jacinda Ardern. They talk, and she listens to how bad things have become.

“I need some help, Jacinda. I’m getting noogies at least ten times a day. I walked around all day yesterday with a ‘kick me’ sign taped to my back. I just want it to stop!”

“I know. All you did was field a phone call, Chris. You literally did next to nothing. This is all just pre- election jitters.”

“I just can’t take it anymore!”

“Here,” Jacinda hands him a small pill bottle. “Take some of my melatonin. It’s over-the-counter, nothing serious. It has really helped me get to sleep recently, what with all the excitement and all. Just don’t mix them with alcohol.”

On his way out, Chris is stopped by a security guard. “What are you doing here?! The rest of the group left over an hour ago!”

“The class field trip! What’s your school’s phone number, son? I can tell them where you are. Somebody call the school! I’ve got a lost little boy here! Help!”

That night Chris sits up late, trying to process things. He is binge watching House of Cards – his favourite show – to help take his mind off work for a while. He had some red wine with dinner, but is still feeling on edge. Ignoring Jacinda’s advice, he pops open the melatonin bottle and takes three tiny pills. “Should be fine, it’s been a couple of hours since I had any to drink,” he thinks. He relaxes in his chair as his boyish metabolism processes the mixture of chemicals in his system. “House of Cards is awesome, it’s sort of like my job. Except badass. Hmm.” Chris falls into a House of Cards themed dreamscape, lightyears deep and sculpted by melatonin and merlot. In the infinite abyss he hatches a new identity, a plan to get back at his bullies in the real world, and a strategy to get back on top. When he awakes he immediately begins drafting honorary citizenships for the entire Australian Liberal Party cabinet. He has become a new man – Chris Hipkins: International Political Operative. Winston Peters and David Seymour are spending some quality time together. They are pals. Not a lot of people know this, but Winston sees a lot of his younger self in the budding 34 year old. A fresh young upstart. A beacon of febrile bluster in an otherwise pedestrian parliament. They are both looking at David’s phone.

“Someone has sent me a ‘Snap,’ or, an electronic photograph.”

“And just what the bloody hell do you call that?!”

“It’s a dick pic, Winston. I receive them daily.”

“Well, bloody well get rid of it will you? By Jove!”

“No, Winston. I believe in both the economic free market and the free market of ideas. I cannot block this young man, Winston. It’s his freedom of speech.”

David stares at the torrent of dick pics and shitty memes flooding in, a single tear drop flowing down his cheek – firmly of the belief that he has tapped into something truly powerful. The voice of a generation.