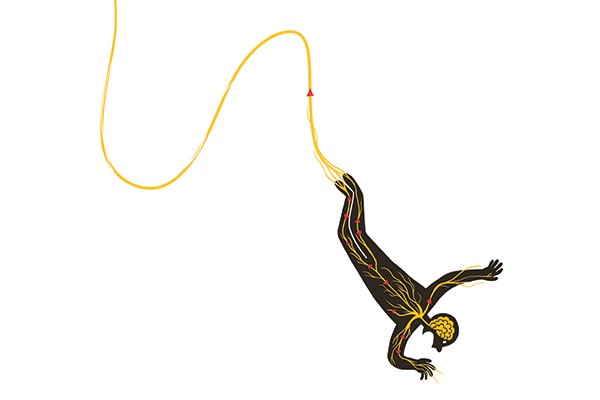 When I was thirteen years old in Bali on a family holiday, my dad decided, after a few too many beers, that parasailing on the beach was most definitely too good an opportunity to pass up at just USD$7 a pop. Before I knew it, I was strapped into a rusty old harness to be whisked into the sky, flailing along fecklessly behind a boat that was rustier than the harness, piloted by a dude who was most definitely more inebriated than my dad.

“It’s a bargain!” Dad gleefully exclaimed, getting his Nikon ready to capture my tormented face. My dear father was just as afraid of heights as I was, but I guess that his fear of missing out on a good Indo bargain more than eclipsed his acrophobia, which was no doubt dampened by a bevy of bevvies.

I can’t say whether it was the fear of the height alone or the fear of the shoddiness of the “harness” I was reigned in by, but my fingers and toes were surging with the most horrific rush of intense energy. Since then, I’ve only felt this again in the most extreme of moments (such as near-crashes in my car) and I have to say, I’m pretty keen to avoid it wherever possible.

Unlike my bland self, there are many people who crave this rush and actively pursue it. These are the people that have exciting Facebook profile pictures, the ones whose faces are never actually visible because they are always obscured by a helmet and goggles, or because the shot is a wide-angle view of them doing something adventurous somewhere exciting and rugged. These free spirits are more than just a walking Patagonia advertisement, they are seizing life by the horns and tapping into the gift we have all been biologically granted - the fight or flight syndrome, otherwise known as the adrenaline rush.

During your garden-variety terrifying-as-hell encounter, the human body does a host of incredible things in a split-second without us even thinking about it. It’s a solely primal response that occurs in most animals, allowing us to effectively deal with the perils we encounter.

First, your hypothalamus (a part of the brain) receives sensory information about the threat you are facing, and it then activates your brain’s sympathetic nervous system, by sending signals to the adrenal glands, which then pump adrenaline into your bloodstream, as well as noradrenaline and cortisol, the hormone responsible for stress.

When this system is activated, all of those physical responses come to life. Your body is charging like a flat on bikkies at Hyde Street - you tense up, become way more alert and speed up your reactions. Pupils dilate, allowing in more light, your muscles fill with blood and oxygen, and you are now officially ready to party.

The adrenaline and cortisol now flowing through your veins increase your blood sugar levels, meaning that your muscles can use more energy, rendering them ready to take on tasks that might otherwise be somewhat outside your usual lazy scope of Netflix and chill. All of these responses are collectively known as ‘fight or flight’, and are there to aid us whenever danger is imminent. Cheers, biology.

A lot of urban myths have floated around, telling of mothers lifting 1800kg cars to save babies, which is attributed to ‘hysterical strength’, a state enabled by adrenaline - however these aren’t entirely realistic. Professor of Kinesiology at Penn State University, Vladimir Zatsiorsky, has extensively studied the biomechanics of weightlifting, and found that while a regular person can max out 65% of their available power in a training session, dedicated athletes can do around 80%, gaining an extra 12% in competitive moments. It therefore makes sense that when medals are won at the Olympics, not just the winner smashes records, but also many of the competitors - this is due to the intensity of the competition, and the adrenaline consequently summoned by the competitors.

However, while adrenaline can enable us to exceed our usual limits, there’s only so much we can physically do. A 60kg woman who can deadlift 80kg during a regular workout might be able to lift 100kg in dire straits - which is an impressive result of an adrenaline rush. But an 1800kg car? Science says no.

Another factor that enables us to push our limits is analgesia, the inability to feel pain. When we have adrenaline coursing through us, the pituary gland and hypothalamus also secrete endorphins, which suppress pain and induce pleasure. This is why you can run from danger even while injured, which many people put down to mere ‘shock’.

Adrenaline is not always limited to just a fear response; sometimes it is linked to other strong emotions, such as anger or excitement. Sensation-seekers, more commonly known as adrenaline junkies, chase the feelings that are released when they engage in behaviour that involves a significant amount of risk. Most of the time, these activities fall under the ‘extreme sport’ banner, while others find careers with a certain level of danger, such as emergency services.

Self-confessed adrenaline junkie Andy Ennis remembers asking his father to drive recklessly as an infant. “I used to ask my dad to go over some hills really fast in his car, so I could feel the butterflies in my stomach when we would go down the far side.” He also believes that adrenaline is an addiction, “but so is everything else. People can get addicted to food, gambling, substances and sex. Moderation is the key.”

Tom Jackson* is a downhill skiing and mountain biking enthusiast, who also drives drift and track, and refers to himself as a “weekend warrior”. He describes the experience of extreme activities as “less of a physical sensation, and more of a mental state. You have to be 100% in the moment; all your senses are tested. I guess the feeling I most enjoy would be the feeling of being on the edge of grip and controlling it. Like when you are skiing and turning on edge you can feel the skis bite the snow. Or driving fast on a track and feeling the tires through the steering wheel. Being able to control that is awesome.”

This is partly why he does what he does, stating, “I enjoy stressful, intense situations in general. I feel that it gives more to life … I seek out novel experiences in general, and once you get used to high stimulus activities it’s hard to go back.”

Andy has similar feelings. “Basically, you're chasing the rush. Butterflies in the stomach. Both from planning and anticipating the event, as well as when it happens … it gives something to look forward to other than the mundane 9-5.”

Neither of these adrenaline seekers are fools, though - given that one in sixty BASE jumpers die (BASE jumping is parachuting or wingsuit flying from a fixed structure or cliff, a.k.a. get fucked thanks), and many people are attempting high climbs without harnesses, both Tom and Andy have their heads screwed on when it comes to risk assessment and caution.

“Statistically, everyone dies. Whoever lived the most before dying wins. And everyone can measure what constitutes living for themselves … there are limits. I'm unlikely to buy a wingsuit and make a video montage. You won't catch me free-climbing 90 metre cranes in Russia, or BASE jumping off of any buildings in the United Arab Emirates. I will watch the crap out of people doing that though,” Andy states. “I don't want to leave a widow. I want to watch my son grow up.”

“But I also want to enjoy life. So it's about measured risks. Just like I won't bankrupt us by pursuing the next rush, I won't put myself unnecessarily in harm's way. But I won't refuse to leave the house for fear of getting into a car accident either. Somewhere on the internet recently, I read an article which listed activities based on how dangerous they are as a comparison to giving you a one in a million (or something) risk of dying. So driving 500 miles might give you one of those ratings, but flying 4000 miles would give you the same risk of death … it was an interesting way of saying, ‘as long as I'm not pulling in TOO many of these on a regular basis, I'm statistically normal’.”

Tom echoes this, believing that “people who BASE jump or climb without ropes are just asking to die. I don't want to die. I do activities where I can eliminate most externalities that would lead to injury. I am also careful when pushing my limits. It's easier to go 1% over the limit and recover than 50% and wreck yourself. That guy [who] just climbed El Capitan with no ropes, he has a problem.” (El Capitan is a 900m high vertical rock formation in Yosemite National Park, California.)

The most dangerous thing Tom has ever done is still more than hair-raising enough for most regular folk, though. “I live in the Southeast US and get to ski 10-15 days a year. So when I can go out west, I make the most of it. This past season I broke my own personal speed record on skis and went 114kph. Nothing I have done before felt like that. Dancing on the razor's edge is all I can describe it as. The sound of the wind, the strain on my legs, feeling the snow under my skis, having to look ahead and calculate my path as fast as I can possibly think, it all came together. It was way more intense than driving a car 300kph, or taking a large jump on a mountain bike. Better than sex, not even close.”

When asked his most dangerous feat, Andy jokes, “besides pissing off my wife? Because everything else is a distant second. That woman knows where I sleep!” He adds, more seriously, “scuba diving is slightly dangerous. Rock climbing is a little dangerous. I did 10 laps at World's Toughest Mudder, which was both expensive and fun. Off-road ATVing [all-terrain vehicle] is very normal for me. For the record, roller coasters are dollar for dollar some of the best and generally safest adrenaline rushes.”

For those who haven’t heard of it, the World's Toughest Mudder course touts itself as “the most extreme, insane, imposing, pulse-pounding, heart-stopping 24-hour obstacle course challenge on the planet,” and involves things like a cliff jump into water. (I don’t even want to do anything that feels GOOD for 24 hours, let alone an obstacle course!). It takes someone who is somewhere between a hardened criminal and a cyborg without the fear gene to want to enter this.

Both Andy and Tom still have exciting feats to work toward in the future, with Tom about to start paragliding training whilst focusing further on track driving, and Andy keen to go sky-diving in the future. Amazingly, neither have injured themselves more seriously than a broken wrist while BMXing (Tom) and a broken arm from falling out of a tree (Andy). Perhaps this is why they can pitch such sound advice to adrenaline-curious newcomers.

“Don't be afraid to get out of your comfort zone. Go out and seek new experiences. You don't have to jump off a bridge, I get more of a rush in some social situations than I do with other activities,” Tom offers. Andy’s advice is to emulate his safety-conscious cousin. “Learn how to do it smart. I have a cousin who climbed to Everest base camp. She's BASE jumped, done two Ironman Triathlons, multiple marathons … her nickname in university? The “safety police”. She always researched and did things safely. Her husband didn't do any of those … he died of a heart attack at 38. So live your life. Do fun and interesting stuff. Just don't do anything stupid that starts with ‘hold my beer and watch this!’.”

* Not his real surname.