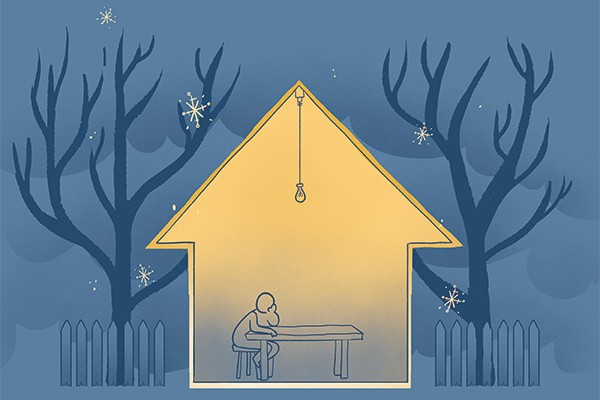 You’re wrapped up warm in bed in your dimly lit room and the last thing in the world you want to do is get up and start your day. Even if you could muster up the courage, dealing with the dreary, cloudy day and the bitterly harsh bite of winter just doesn’t seem worth it.

‘What should I wear today,’ you think to yourself, and the pit in your stomach deepens. The idea of having to get dressed makes you wish you could sleep forever. A case of the Winter Blues has struck, and it has struck in full force.

Maybe you haven’t heard of it (because it doesn’t seem to be addressed a whole lot in society) but the ‘Winter Blues’ actually has a more formal name: Seasonal Affective Disorder (SAD). It’s a real issue.

According to the official SAD website, Seasonal Affective Disorder affects an estimated half a million people every during winter, in particular during June, July and August. That’s a big number, right? So what causes SAD?

The Mental Health Foundation of New Zealand describes Seasonal Affective Disorder as a form of depression during the winter months caused by a biochemical imbalance in our bodies due to the shortening of daylight hours and the lack of sunlight. Symptoms of SAD include feeling withdrawn or depressed in the winter period, excessive sleeping, tearfulness, and abnormal eating patterns. Perhaps this is ringing some bells? This issue is important and it is not addressed in society nearly as much as it should be. We need to talk about it more.

Dr Davinia Thornley, a Senior Lecturer at the University of Otago, suffers from Seasonal Affective Disorder. She gave me some insight into how it feels to have to deal with the Winter Blues and what she does to combat it.

“In my personal experience, it can range from sleeping a lot more than normal, crying for no reason, [to] wanting to eat a lot … we are animals, and this is kind of our hibernation behaviour.”

Thornley has lived overseas in Alaska for three years; she describes it as a “frozen desert”. She told me that at some points in the year it was light at 11:00am and then dark again at 3:00pm. It was dealing with such a harsh climate when she first began really noticing the cruel effects of Seasonal Affective Disorder.

Usually a very active outgoing person who has no problem communicating with others, when Thornley and her husband moved to Alaska she started she “literally acting like another person”.

“I would eat and eat and eat, I was crying a lot, and I sometimes towards the afternoon would find myself just going to bed wanting to sleep.”

Dealing with SAD in such an extreme climate is exceptionally tough. However, don’t be fooled. You don’t necessarily have to be living in Alaska to suffer from it. When Thornley moved to Dunedin, after a few years of living in warmer parts of America such as North Carolina and California, she began to feel the same kind of effects all over again when winter rolled around.

So what are some ways that we can deal with Seasonal Affective Disorder instead of just brushing it off as something we can’t control? Throughout the many years of struggling with SAD, Thornley has adapted many coping strategies which she finds to be effective.

Our whole house is painted very pale colours. Everything is pastel – pale blues, pale yellows. Our living room is a really pale off-white yellow. It’s weird because it’s just subconscious, but I turn away from dark colours in rooms.”

According to a study discussed on Live Science, the colour yellow is proven to affect people’s mood by capturing the joy of sunshine and communicating happiness. Thornley agrees that even small changes that literally brighten up your day can really make a difference towards how you’re feeling, even if it’s just getting the brightest spectrum light bulbs that you can.

Getting a high dosage of vitamin D is also super important in combatting SAD.

“Vitamin D is the stuff that comes from the sun, it gets in our bones - we need it to keep us healthy, but we also need it to prevent SAD.”

Thornley tells me that when she first got to Dunedin in 2005, she wasn’t really doing a whole lot to combat her SAD. Then, around five or so years later, she began taking vitamin D. This helped her get through three winters, but then things started getting bad again.

“I started to really struggle. I say this as a joke, but I think it’s actually really telling, but it’s literally like you are being taken over by an alien.”

Thornley continues, “In the middle of winter, we always have mid-winter break right, from the university. So I’d have a bit of down time, and I’d be at my house and I’d be on the computer, and it was like the ‘zombie’ would make me start looking for jobs in warm climates.”

Thornley tells me that she doesn’t want a new job; she likes her job. But something in her made her begin browsing jobs and holidays in warmer climates, just to escape the dreaded winter of Dunedin.

“I just remember thinking, ‘wow, this is really problematic’.”

Thornley recalls desperately desiring to go on a tropical holiday, but decided it would be cheaper to buy one of the special lights named a ‘Light Box’ that are available to help combat symptoms of SAD.

“They’re not cheap, and you can’t buy them from overseas because the adapter is different. It costs about $450, but that was better than dropping around six grand on a holiday to Bali or somewhere like that.”

This is true. Holidays in sunny, warm, climates sound like the perfect way of dealing with symptoms of SAD. However, not everyone can afford this. Therefore, the Light Box is a great alternative. Every morning, Thornley sets up the Light Box on her dining room table and eats her breakfast in front of it. She finds this makes a huge difference to how the rest of her day goes.

“If you haven’t got time, it’s kind of like going for a run in the morning. It jogs your body into action, wakes you up, stops you feeling like a zombie. It can make a big difference, and for people who suffer really badly from SAD, I would really recommend it.”

However, as you may have picked up by now, there’s no easy answer to dealing with SAD. Thornley tells me that the light also helped for a while, but then things got even worse. She found herself dealing with a period each year around daylight savings, which she calls her ‘feeling underwater phase’.

“It’s a two-week period where the light shifts, and I literally feel as though I’m walking around under water - like I actually can’t start myself going.”

Another thing that Thornley does is exercise. She tells me that she deliberately chooses exercises which involve warmth, such as going to the Physio pool or doing hot yoga.

“It’s a win/win. You’re taking care of your exercise and your need for warmth and heat all at the same time.”

Thornley also makes sure to go out and absorb some sunshine at some point during the day, if there is any. She tells me that even just sitting by a window where light and warmth is coming in can be very helpful.

Thornley is one of the many people who deal with SAD while just passing it off as typical hatred of winter time.

“I never connected it with having SAD, I just thought, well I didn’t think really. I just thought ‘that’s weird’ and that was the end of it.”

It seems that this is the mentality of many people. In New Zealand, we are often told to ‘harden up’ or ‘chuck some extra layers on’, when we are feeling the harsh effects of winter, however some people are often struggling due to something more serious. Have you ever thought that it possibly isn’t normal that during the winter you’ve dealt with feelings of depression and anxiety, eating problems, excessive emotionality, tearfulness, disrupted sleeping patterns? Maybe you’ve just been told to ‘put some more layers on’ or just to become more of a ‘tough kiwi’.

This is not the right mentality. Not enough people are aware of Seasonal Affective Disorder, and this can be a problem. Thornley agrees with me.

“If I had one thing I would say to New Zealanders more generally (because I spent thirteen years overseas); what I’ve found is that everything is cultural. And we in New Zealand are very bad at – well because we have a cultural norm about things – we dismiss what is actually proven in other places.”

Thornley is referring to the fact that SAD is less known or less accepted here. New Zealanders tend to have a cultural tendency to try and ‘toughen up’ when problems occur, rather than dealing with them.

According to various studies presented by Psychology Today, SAD affects more than 10 million Americans. It is clear that in countries like the US, SAD is much more widely known and accepted, which Thornley can vouch for.

“It has not been something that many people have understood or even acknowledged until I would say probably about the last twenty years or so, and it’s still making its way down to New Zealand. Because I’ve spent time living in America, it is much more well accepted there, also because you’ve got parts of America which are an extreme cold environment, whereas in New Zealand we don’t have as much of a temperature difference. And I think a really important aspect of that is that people assume that [the problem] is the cold, but it’s often light.”

As Thornley tells me, “If you’re having these feelings, it’s completely normal”.  And she’s exactly right. Thornley is a wonderful example of how although it may take hard work, years of hard work perhaps, you can get on top of your symptoms; you can manage them.

So if you’re feeling symptoms such as increased depression, anxiety, tearfulness, eating issues, excessive sleeping, or irritability, which intensifies or reoccurs in the winter time – don’t brush it under the mat and just regard it as you simply needing to ‘toughen up’. Don’t let others tell you to simply ‘harden up’ either. You could be suffering from Seasonal Affective Disorder, which is a real, pressing issue. Even if you experience these symptoms are all year round and keep it at bay without dealing with it, it is not something to ignore. Don’t hesitate to get the help you need. Employ some of Thornley’s strategies to cope with SAD, or simply just talk to someone. It will be worth it.