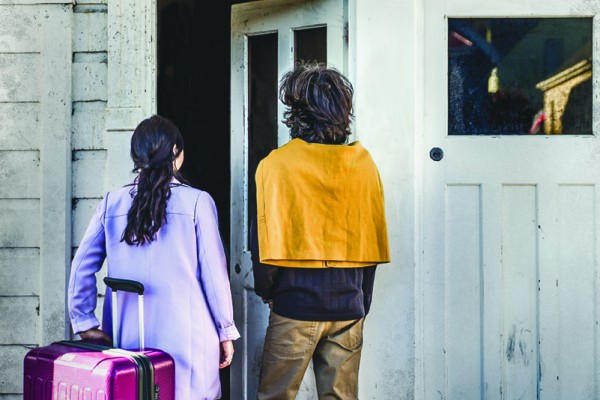 Houses were left open, bodies of the undead lying in the stairways, semi-naked beside the corpses of burnt couches in front gardens, and on barely intact balconies. As the bus slowed, turning to pull in behind a Toyota Starlet that had its front windows smashed and “Sink it Cunt” spray-painted on the bonnet, one of the refugees was heard whispering to her husband, “I can’t live in a slum like this”. Her husband replied with the most reassuring message he could possibly give: “It’ll only be for a short while, my darling. Just until they find the antidote; then we can go back to Santa Barbara, okay?”

They had flown from the other side of the world to seek refuge in what was once known colloquially as our ‘slice of paradise’. They arrived in the isolated town of Momona, a desolate shed of an airport. Cows grazed untouched alongside the obvious effects of the bacterium that has devastated the globe - the rusted carcasses of cars, the human hair tangled around the fence wire. The cows were the only signs of normality for the lucky few who won the golden tickets to journey to ‘The Land of the Long White Cloud’.

60 percent of the known infected population live in segregation from the healthy minority, although nobody knows exactly what the bacterium is doing inside its human hosts. For some strange reason, Dunedin’s student population appeared to be resistant to the infection.

Only one flight per week into the entire South Island has been allowed for the last six months. The lucky few were taken by shuttle into town soon after collecting their bags from the rusty, seldom used baggage carousels.

The driver held a can of Diesel in one hand as he drove, swigging from it every couple of minutes. Empty Diesel cans rattled round the floor of the van. They emerged onto Cumberland Street. Few cars interrupted them as they drove through red light after red light, the police nowhere to be seen. A right turn brought the vehicle onto Dundas Street, lined with terraced, red-brick, dilapidated houses, coupled with overgrown, trashed front gardens. And then a left turn onto Castle Street rendered an audible gasp from the occupants of the shuttle bus.

The driver got out and walked around to the main sliding door of the minibus, holding a clipboard in his left hand and a taser in his right. He raised the clipboard to his face; the anticipation was palpable, as each closed their eyes and prayed to the god who had forsaken them that their names would not be called out.

“Oh my god, John. How will we cope living in this… dump.”

“Let’s just do as he says. I don’t know if that taser is for them or us.” John whispered.

The Robinsons collected their baggage. The driver quickly got back onto the bus, honked his horn, and drove off, accelerating rapidly along Castle Street. The Robinsons looked around them at the chaos, wondering why this area of town was any safer than their beautiful Santa Barbara, which, though swarming with the infected, at least retained the aesthetic advantages that Castle Street severely lacked.

They cautiously approached the house they were allocated a room in. As they swung open the gate, a young man emerged out of the dark and dingy abyss and locked eyes with the Robinsons. Like rabbits, they froze. The young man seemingly sensed the presence of people before him because, though he wore a ripped Arana College sweater with a large hood that limited his vision to just the two feet of carpet before him, he lifted his head slowly. His eyes widened and the cereal bowl he had in his left hand began spilling on the floor, evidently not for the first time.

The minimal movement made Judy Robinson assume that he was in pain; too much to even worry about the two strange people standing in his front garden with baggage. Something clattered at his feet. They looked down. The floor was thick with empty Diesel cans.

The bacteria that caused the sickness was like nothing else Earth had ever experienced. It affected the physical world as well as its human hosts. It strengthened the flora and non-human fauna the infected came into contact with, while weakening the humans’ flesh and minds. Cats became man-eating tigers, and a single flea could drain a human dry in twenty minutes. The infamous mould of Dunedin flats had gone from an unhealthy inconvenience to a menace, swamping beds, curtains, kitchens, and couches with thick green-and-grey mould. Worse still, the mould had learned to grow on human skin. What the Robinsons had thought were partially-clothed people were actually naked, half-covered by mould. Around the edges of the mould the skin was red and aggravated. The infected scratched at the mould and pulled off strips of rotten-looking skin.

Stranger still, the infection intensified negative thoughts. If a person felt a strong negative emotion, it was projected out into the environment around them. Group outrage had the worst effect. Rumours and stereotypes became reality. In the UK, for example, anti-vaccine memes had infiltrated enough people’s minds that they forced their way into reality. The infected who had received MMR vaccines suddenly developed mercury poisoning. Simultaneously, the fears of the pro-vaccinators manifested in the vicious return of epidemic illnesses, even those that had been considered long gone. Along with cholera, measles, and whooping cough were polio, smallpox, and long-forgotten illnesses that should have disappeared as humans evolved. In the US, a similar phenomenon was happening with both terrorism and anti-terrorism. Planes and buses were blowing up almost as often as they weren’t, while infected racists caged or murdered anybody who looked or dressed differently to them.

In Otago the outrage was different. Newspapers and social media focused on the menace of students out-of-control, a continuation of the narratives of old. In response, hordes of the infected filled the streets with broken glass, set not just couches but whole buildings on fire, had sex in public, dressed in culturally-appropriated costumes and sexually assaulted members of the public in the streets, ignoring the CCTV cameras pointing directly into the houses of the student ghetto.

But this young man, despite the mould growing up the walls in his flat, seemed to be fine. Apart from what appeared to be a penis scrawled on his face in permanent marker, his skin was clean. John and Judy, who had had two children around the same age as the young man until they were infected in Southern California just two weeks before winning the ticket to safety in Dunedin, said, “are you okay? Are you infected?”

The man, showing visible signs of pain as he tried to open his mouth to speak and then readying himself to try again, simply responded with, “just a really heavy night last night… Not that I know of, though I did have chlamydia a while back.” He put down his bowl of cereal, picked up a can off the floor, shook the small amount of liquid inside, and emptied it into his mouth.

Judy and John were overwhelmed with happiness.

Although the staircase and corridor had food, rubbish, clothes and empty Diesel cans strewn so thickly across it that they had to wade through it rather than find a clearing for each foot, the Robinsons knew that one uninfected person meant the house was clear of the disease.

“Excuse my rudeness,” said Judy, “but are there any infected ‘people’ living in… there?” She pointed inside the house, and scrunched her face up slightly at what would be her home for the foreseeable future.

The young guy built up the energy to answer, and then, once he had, said “I think only Olly is infected, but he shouldn’t be too much of a problem, he lives mostly at his girlfriend’s place on Howe Street. We hardly see him.”

Just as John was about to respond, the young man interrupted by saying: “but he’s going to Student Health next week, so he should be clear soon.”

“They have a cure?” John asked, not concerned at all for the future of the young man’s friend or the global population, but for his son and daughter.

“For chlamydia? What world are you living in? Of course there is. It’s just a course of antibiotics.”

“No, we mean for the infection?” They both began speaking but, upon hearing Judy saying the same thing as him, John refrained from finishing the sentence.

“Look, I’m severely hungover, and now my cereal is soggy and inedible. I’m only doing health science, but even I know chlamydia is curable.” With a heavy sigh, he said, “Your room is upstairs, first on the right.”

He gestured toward the top of the staircase and then took a step toward the ajar door to his left.

“Wait,” Judy said, as she looked worriedly at John, before asking, “you do know about the global infection, right?”

The young man looked fed up with the interrogation he was receiving from these two people who were, for the foreseeable future at least, going to be living with him and his flatmates.

“Look, it’s April 2nd, which means Hyde Street was yesterday. I was drinking from 6am until I was kicked out at 4pm for not having a wristband, and then carried on drinking before going to town at 11pm, which I left at 4am. I have a 30 percent assignment due tomorrow, and I haven’t left North Dunedin for two and a half months, so no, I don’t know of any global infection.”

As the man disappeared into the room, the Robinsons looked at each other and then looked at the street around them. The charred skeletons of couches adorned the road; Diesel cans clogged the gutters; doors to flats were wide open and no one seemed bothered about it. Although the signs of the infection were clear from a brief glance, the residents were not affected.

Two students stumbled down the road, one dragging along his left leg, presumably having minimal use of it. Each clutched a can of Diesel in their hand.

“Are you okay?” Judy asked the passer-by. She reached out to get his attention but stopped with a strange whimper.

“What is it, darling?” said her husband. She said nothing and held out her arm. There, in the middle of her forearm, was a tiny spot - no bigger than a speck of dirt - of the grey-green mould.

“It’s the Diesel,” said her husband, “the Diesel keeps them safe.” He pulled her into the house, past the puzzled cereal eater, and went straight to the fridge. “You’re welcome,” mumbled their host.

The Robinsons opened a can of Diesel each and started chugging like their lives depended on it.