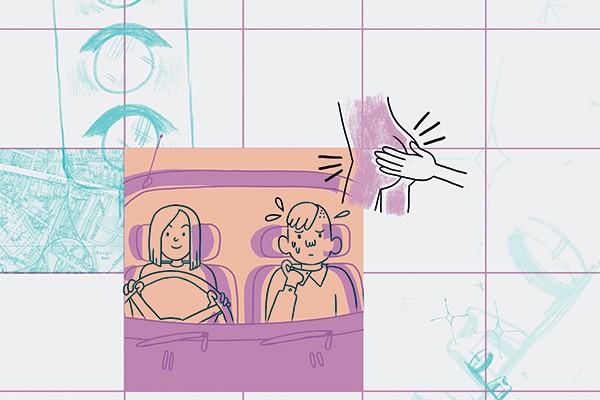 It could be the well-dressed, polite woman serving you in the bank, or the elderly bus driver who ambushes the passengers with talkback radio at an aggressive volume. It could be your stern lecturer, or even your parents. The world is brimming with saucy people harbouring all manner of thrilling fetishes, which are indulged behind closed doors in the privacy of their homes, at secret parties, or dark nightclubs catering to their every whim and desire.

Unsurprisingly, the world of kink is still fraught with secrecy, due in part to the fact that having a fetish is usually considered outside of the norm. A fetish, in the sexual sense, is a word that refers to something that arouses somebody. By definition, your appreciation of a shapely butt could be considered a fetish, however, it’s not usually seen that way, because our society is one in which liking a curvy butt has been normalised and accepted as mainstream. So where does a ‘normal sexual preference’ stop and a ‘fetish’ begin? How do people develop the more ‘out there’ fetishes? Does it mean that there is something ‘not quite right’ with you if you have one?

I managed to track down quite an assortment of wonderful kinksters to share their thoughts on their own fetishes and society’s view of fetishes in general, and was rewarded with some fascinating insight into the underground playground of kink.

Ariane, an Australian marine biology student, moved to Berlin about two years ago and has major love for what many refer to as the kink capital of the world. “Everyone here has a fetish and is not afraid to let their freak flags fly. It’s a beautiful thing that I think everyone around the world can learn from.” Not one to do things by halves, Ariane has a number of fetishes, including (but not limited to) bondage, sadism and masochism, voyeurism/exhibitionism, latex, and sexual fluidity.

When it comes to her formative years, Ariane is not very different from myself. “I had a very stable childhood experience. Loving parents and a safe and secure home.” Dispelling the often mistaken and archaic idea that emotional childhood trauma holds responsibility for people developing fetishes, she continued, “I don't think that there was anything really except curiosity that lead me to this lifestyle.”

Sam*, an IT professional, has searched but, thus far, hasn’t found anyone that shares his fetish. “I get aroused by women driving. Being driven around by a woman is an extremely pleasurable experience!” He discovered his fetish partly by accident. “It was a night after being with my then girlfriend. She drove me back to my house and I remember being extremely aroused. We weren't touching or kissing so I tried to figure out what it was that had aroused me. It happened the next time, and then I realised it was her driving that was doing it.”

“Seeing a woman's hands on the wheel/gear stick is the most exciting part,” he continues. “Also, a selfie taken (while parked!) showing the seat belt across her chest.”

Like Sam, many people’s fetishes don’t involve what most would consider to be explicitly sexual activity.

James* has a fetish that might fall into this category. He fetishises women with leg braces and leg disabilities. James discovered his fascination “before I was old enough to know what to do with it. I was about four or five and saw a girl my age in World Book Encyclopaedia in leg braces, I saw the Jerry Lewis telethon with girls my age in braces, and I saw Susan Gordon in reruns of The Five Pennies in leg braces.”

Other incidents in James’s childhood nurtured his developing curiosity - “I think it began with Catholic school and church guilt, films shown in class about ‘the good person who talked to the crippled girl’, public mystique ‘don’t look at or talk to that crippled woman’, et cetera.”

James believes his formative years had a lot to do with the development of his fetish, reminiscing how “a girl used to visit her grandparents’ house near mine and wanted to play ‘house’. There was an old wheelchair there and she liked me to push her around in it, sometimes playing ‘you’ve got polio’ like in the public service announcements. We were too young for it to go beyond innocent. She was not attractive. Her grandmother became agitated when we even touched the old wheelchair in her basement.”

Dr Phreak* has a more nuanced taste, preferring the psychological aspects of “daddy-daughter” role-play. “Daddy-daughter” is an umbrella term usually associated with the dynamic between an older, dominant man and a younger, submissive girl, rather than actual incest roleplay. “Pretty much any role-play with implied force or threat that isn't physical,” he describes. “The look of shame in the woman's eyes. The role-play and shameful look are tied together. There's something about the idea that she doesn't want to, but must, leading to enthusiastic participation, and then back to shame. I guess it's a vicious cycle ideally.”

It’s important to understand that when you are exploring sexuality and fantasy, the person you choose to portray in the bedroom is not necessarily a reflection of who you are as a person - the sooner you accept this, the sooner you can indulge in your kinks without guilt or reservations. Many people who adopt a submissive role in the bedroom are quite powerful or busy in their careers and seek the relief of having decisions made for them in the bedroom - a liberating experience when you hold a demanding dominant role in everyday life.

“I'm truly a decent guy,” Dr Phreak tells me earnestly. “I believe in equality between genders. Not multiple sets of rules, but equality. I have respect for people in general. I could never be in that sort of sexual relationship without having respect, affection, and trust for the other.”

Trust and intimacy are central to many fetishes for couples. Dunedin couple Simon and Megan indulge in dominant and submissive roles in which spanking plays a central part. “You can’t do that kind of thing with just anybody,” Megan explains, glancing briefly over at Simon. “I have to trust that he’ll spank me safely and respect my boundaries, and he then has to trust that I won’t allow it to go too far without using a safeword. He doesn’t want to inadvertently hurt me.”

Spanking is popular because experiencing pain releases endorphins, which also triggers a release of sex hormones. But what’s in it for the person dishing out the punishment? “Seeing her in a truly vulnerable state, where all she can focus on is what’s happening in the present moment between us - it’s such an intimate experience between two people,” Simon replies sincerely.

Most of the fetish community agree that much of the public’s perception of kink is pretty misguided and unfair. “It’s terrible. I could point at women and say “looky them tits” and I’d be a good ol’ boy. But a unique fetish, you can get crucified,” laments James. Dr Phreak feels the same, adding that “cynically, I don't think the general public is all that bright. I think they hear the word and label it as something that's weird and different. As a result, they shun the idea of having a fetish without realising they have some of their own.”
Sam believes that “the main culprit is the media who sensationalises anything even remotely sexual … I think the public are quite accepting of ‘mainstream’ fetishes. Big breasts, blondes et cetera. However, anything that strays away from ‘normal’ is frowned upon.”

Kink involves a very large spectrum, from the very tame (wearing a blindfold during sex) to the very extreme (wearing a gimp suit to the shops). When many consider kink, they “tend to think to the extreme and are not exposed to more tame aspects of fetish. It’s a shame because it puts people off, it’s the fetish equivalent of jumping straight in the cold water without dipping a toe in first,” Ariane explains.

The most important thing to remember is that, whatever your kink, you’re not weird or faulty, and you’re certainly not alone. Sam describes fetishes as “nothing to be ashamed of, they should be embraced. Enjoying something that isn't popular doesn't make you strange or weird. There are seven billion people on Earth, someone out there will like the same as you!”

*Not their real name