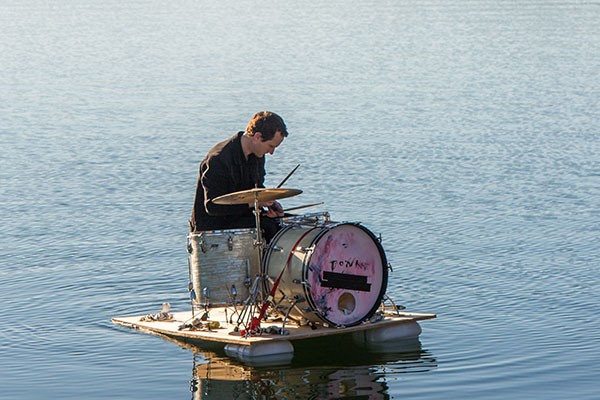 Tim Player: The Bruised Proscenium and The Immaculate Rock Dog

Tim Player spent a Friday morning floating round playing his drums on a tiny raft in the Dunedin harbour. The performance was filmed by Arron Clark and will be screened at The Audio Foundation in Auckland on May 4th. Critic spoke to Tim about what the hell he was doing.

Critic: Can you explain the title of your performance? What is a rock dog?
Tim: I'd never give you a detailed explanation of the title. Seemed like a good string of words when I came up with them. Titling is something I enjoy. The exhibition has an element of bruising (hence the bruised proscenium bit) and rocking out (hence the rock dog bit). As to your question "what is a rock dog?", I'd say go read the artist statement under my name on the Audio Foundation website.

Critic: The Proscenium is a stage. Why did you choose to build a stage on water?
Tim: It’s something I've wanted to do for a few years. The stage in any performer-audience relation is always a vital consideration to me. In contemporary art practice and discourse the stage is a pretty porous thing. I like the idea of floating on a make-shift stage playing raucous drums because it’s highly absurd. As naive as it might seem, the question I set myself when starting out was: "Is an absurdist art event still possible to enact?" The best way for me to test the validity of this question was to invent some context for it to happen with a sense of openness and originality. I should add that my hang up with the absurd is tinged with a subset of hang-ups regarding the efficacy of art as a vehicle for political and social critique. I'm interested in possibilities and horizons quite at odds with the kind of post-politics, post-left, view of things. If anything, I believe in the continuing importance of kicking back and the potential for new distributions of the sensible. Art is a really good way of showing how new distributions of the sensible might look, sound and feel. Art, on this reading, has an implicit political dimension.

Being able to look at this or that issue from a perspective different from the dominant one is surely fundamental to an intelligent and gracious culture. Putting myself on a small anchor-less stage and floating out across a broad surface of water represents the acting out of the potential for new perspectives. The kind of art I'm interested doesn't need to be sanctioned by this or that authority. "The rock dog takes risks. They lose it to regain it to lose it again" (www. audiofoundation). Should I have asked for permission and gathered a wannabe audience the event would've sucked. It would've been a pathetic showy exhibitionist gesture. Instead it rolled as I wanted it to. It was gritty and straight up to build a raft and float it with no real idea of what would happen.

Critic: You’ve had a break from performance art in the last year or so. Why did you choose this idea for your exhibition at Audio Foundation?
Tim: I didn't so much choose Audio Foundation. Sam Longmore asked me if I'd like to have a show. The idea was pitched last year, we decided on a date and month, and everything fell into place. Sam and Jeff from Audio Foundation are cool guys and incredible artists in their own right. Yes, I suppose I have had a break from performance. Doing other stuff, more music oriented stuff.

Critic: Why is your raft so small?
Tim: In hindsight, making it larger may have been a better idea. From a hardcore physics pov, more trapped air under a broader floor would've meant I didn't have to strain my backside so hard to centre the stage while flailing about. This was actually quite physically demanding. The reasons for it being "so small" (1200 x 1800 x 20) were dictated by practical considerations and financial restraints. I wanted to be able to tie the stage to the roof of my car, with my drums inside, and drive to and from the site without too much hassle. I don't like being too reliant on other people when doing these sorts of projects. Financial restraints - well you know what I mean there.

Critic: How did it feel to be floating round playing the drums? Were you scared you were going to fall in?
Tim: What a taboo question! It felt great. The water was dense and glassy, the air was crisp and open, the sounds travelled for miles; it was so removed from the usual phenomenological body-space nexus of the practise room or public bar. It was physically demanding and a bit mental. And I like such things. I felt like I was the biggest rock dog that ever did float out on the Otago Harbour. No, I wasn't scared. I can swim. But I know people out there who were scared for me. God bless them.

Critic: What was the audience’s response to your performance?
Tim: The "audience" was made up of random people out for a run or a spot of fishing. There was no studied arty audience. But everyone who was there knew it was art not the meanderings of some freak. With regard to the "audience's response", I wouldn't really know, being out of ear shot and having my hands full. Other than what the filmmaker, who was documenting the performance, relayed post-event (bear in mind he was pretty busy himself): a general kind of WTF was in the air. Which is cool, because a general kind of absurdist statement was always the goal.

Critic: Are you happy with the documentation of the performance?
Tim: Yes, very much so. Trevor did a great job. Arron Clark got it all right. Those two are pros and I'm really grateful they chose to be involved. The documentation is significant to this work and they got it bang on.

Critic: Were you worried your drums were going to fall off the raft?
Tim: I was careful to tie everything on tightly. Falling off wasn't really an issue. Sinking was of more concern.

Critic: Did you play songs from your bands?
Tim: No. At least not complete songs. Bits of songs, at most.

Critic: Did you see some fish?
Tim: No I didn't. I saw birds out of the corner of my eye.

Critic: What was it like paddling?
Tim: Hopeless. The hydrodynamics of the stage are prehistoric. Don't buy one of these.

Critic: What do drums sound like in the middle of the harbour?
Tim: The sound is quite dynamic on the video. And I tried to play some different kinds of things, like loose free-form stuff that might go into a standard 4/4 beat. I also played around with the tuning of each drum a bit, more as a nod to pedantry than anything else. The site acted like an amphitheatre, though a fairly impoverished one. The ambient chance sounds were almost too good to believe, like tooting trucks on the by-pass, or young teenagers buzzing around with all their natural energy. The sound source was fluid, in a gentle slow moving way. Plus, the filmmaker who was capturing the sound moved himself. So there was a good amount of movement between relative points. That, in combination with lots of concrete, steel-hulled trawlers, vast glass walls and unusual cavities made for some interesting aural shifts between shots.