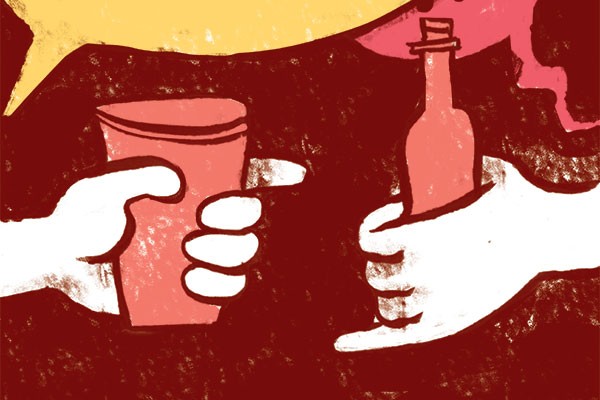 Rape and sexual assault on campus is not a nice topic, but one that everybody at the university needs to think about. Amber Allott discusses consent, the myth of the “grey area”, and resources available for sexual assault survivors.

A little over a fortnight ago, I was scrolling through Yik Yak before bed one night when something disturbing caught my eye. Somebody was anonymously appealing to the Dunedin community for help. The night before, their flatmate had sex with a woman who was so drunk that she passed out.  People were offering advice and support, but I was shocked to the point where I felt a little bit numb. Sure, you hear about this sort of thing every now and then, but here? In Dunedin? I’d always imagined that in such a small, tight­knit community of students, there was relative safety, as well as common knowledge of what is and is not okay in terms of sex. I sincerely hope the woman is okay, and is receiving any help and care that she needs, but the whole horrifying situation has left me wondering; how much of the Dunedin student population are fully aware of what active, enthusiastic consent IS, and what it is not? And furthermore, how are cases of sexual violence dealt with at the University of Otago, and in the wider community of Dunedin?

Two weeks ago, from the 2nd to the 8th of May, was Rape Awareness Week. The week involved activities such as a quiz night, a clothes swap, the annual street appeal for Rape Crisis, and a regional Hui to enable various community agencies to network. According to Rachel Shaw, a community educator for Rape Crisis Dunedin, the primary goal of Rape Awareness Week is to inspire conversation amongst the community. She believes the people of Dunedin are at a “really good point at the moment to have that discussion,” in light of recent events on campus, such as a screening of American documentary The Hunting Ground, and a recent forum on student harassment. “I feel like students are ready and wanting to talk about this, and also wanting the University to talk about it – for me, the goal (of Rape Awareness Week) is conversation and openness.”

The Hunting Ground is a documentary exploring sexual assaults on college campuses. It focuses on several different areas of concern, including the failure of the institutions to report and adequately handle cases of sexual violence, as well as how the subcultures that spring up around university students can perpetuate and even encourage rape culture, with the examples in the film being fraternity and college sports subcultures. The film cited a wide range of startling statistics surrounding sexual assaults on campuses, and although most of them pertained to the U.S., one has to wonder how different they really are here. More than 16 percent of women are sexually assaulted in college, but according to the film, 88 percent of women sexually assaulted on campus do not report it. This is hardly surprising, when only 26 percent of reported rapes in the U.S. lead to an arrest, and only 20 percent lead to a prosecution. There is minimal data on men who are victims of sexual violence, as men face greater chances of being disbelieved or even ridiculed if they choose to report.

Reporting sexual assault on college campuses in the U.S. is a whole different kettle of fish than it is here. Universities are protecting a brand – like a business, they rely on advertising to promote their product. They want to keep statistics that would negatively impact their image, like sexual violence on campus, down. According to The Hunting Ground, this results in unfair and inappropriate handling of reported sexual violence; meetings with the Dean or Chancellor are ignored or passed off, victims are discouraged from going to the police, and even staff who stand up for victims face retaliation – getting branded as activists and troublemakers – often failing to get tenure.

I spoke to Otago’s Campus Cop, Senior Constable John Woodhouse, about what the protocol here would  be  if  somebody  were  to  report  a  sexual  assault.  “Often,  what  would  happen  is  that  the occurrence would be reported to the frontline police or campus watch – who would call for a police response.  At  that  stage,  they  would  call  in  a  specialised  detective  who  would  have  their  own protocols for evidence and scene preservation.” With the police response, all possible steps for care of the victim would be taken. The University maintain an ‘innocent until proven guilty’ approach, and would wait on the result of the police inquiry before taking action. The exception would be in a situation where somebody would feel threatened, such  as if the  accused  and  accuser were in the same  hall,  in  which  case  there  would  be  an  immediate  response.  According  to  Woodhouse,  the University’s job would be to protect both of them until there is a result. Whilst support would be offered to the victim – in the end, what help they required would be left up to them. “Every case is different  – there’s  no  blanket  policy.” Still, Constable Woodhouse would like to  emphasize that, “the university would never condone covering something like this up for the sake of statistics.”

The story I chose to open with is unfortunately not the first time I have seen this sort of thing on Yik Yak, although it is, perhaps, one of the most serious  cases. People seem to feel safe voicing their  doubts  and  concerns  about  sex  and  sexual  situations  in  the  app’s  anonymous  forum­type structure. All too often, people seem confused about what is expected from them sexually, and tales are told by people in relationships, male and female alike, of their intimate partners pressuring them for sex, or of feeling obliged to try some kind of sexual activity they otherwise wouldn’t want to, because  they  believe  they  are supposed  to  enjoy  it. Rachel  Shaw, from Rape Crisis,  believes  if people are asking questions and seeking clarification in this way, that there is a misconception about what consent is. To describe, simple and succinctly, what consent is, Shaw would say, “Consent is the act of negotiating a free and willing yes from your partner.”

Now, let’s take a look at what consent isn’t, despite what some common practices and beliefs may suggest. According to Shaw, “It isn’t something that only happens once – it can be negotiated at any time,  it’s  not  a  fixed  thing.  It’s  not  something  that  happens  under  pressure.  It  happens  as  a conversation  as well  –  it  happens  between  people,  it’s  not  one sided.”  She  notes something  that often comes up in her workshops is the term ‘grey areas,’ or areas where the situation is not black or white, which in the student population,  can often  come down to alcohol  and drug usage.  “Often students are surprised to hear that the standard rule of thumb is two standard drinks in an hour to give  consent...  People  believe  that  if someone says  “I  want sex,”  when  they’re  drunk  that  it’s totally fine,  but that’s  not the  case. You  can’t  negotiate true  consent when  you’re  drunk.  ” Still, Shaw maintains that despite  alcohol  being  a factor, it is part of  a wider issue  around the lack of knowledge of what consent, and therefore rape and sexual abuse, actually is. In terms of what some of  the  main  issues  with  what students  may  believe  counts  as  consent  but  actually  is  not,  Shaw would say that alongside alcohol, coercion is probably one of the most significant.

Coercion is  pressuring  other  people into  participating in  activities,  and Rape Crisis  often  use the ‘Green Eggs and Ham,’ analogy to best describe it. In Dr. Seuss’s classic children’s book, the main character doesn’t want to eat the titular meal, but Sam I Am continuously tries to convince him that he’ll like it if he tries it here, or if he adds this or that to it – he keeps pressuring and pressuring, until eventually, his friend gives in. Shaw believes that this pressure is present in a lot of student situations, even, or perhaps especially so, for students in relationships. “Consent doesn’t stop being negotiated  just  because  you’re  in  a relationship.  The stats reflect  that  upwards  of  40  percent  of sexual abuse is undertaken by an intimate partner – so it definitely still happens.” One  of  the  key  instigators  of sexual  violence  on  campus  in  the  film  ‘The  Hunting  Ground’  is student­oriented subcultures, such as fraternity and college sports. One has to wonder, are there any parallels between this and Dunedin’s Scarfie subculture, or more candidly, the image of the ‘Scarfie Lad’ that seems to pop up so frequently in it? We Scarfies are known – and often criticised – for our unique and vibrant party culture, which is known for high rates of alcohol and drug usage, as well as  casual sex. According to Sr. Cst. Woodhouse, who has been our Campus Cop for  around two years  now,  cases  reported  to  the  University  are  very,  very  rare.  “Considering  the  number  of students,  the flatting situation,  and  the  alcohol, students  are  often safer  here  than  in  their  home towns. If you need help, Campus Watch are never far away; this is a pretty safe environment.” The problem then, rather than being the Scarfie and party cultures as a whole, lie in the norms that are associated with these cultures, in which, sometimes, consent is misunderstood. So, if you see somebody on Yik Yak or anywhere else questioning something that has happened, to them or to somebody else, the key is to have no judgement of the situation. Still, Shaw recommends giving people other options that can help them is the best way to support them. Rape Crisis Dunedin have staff  trained  to support  people  who may  be  unsure  about  what  has  happened  to  them,  and whether it constitutes rape or sexual abuse. Their website has useful definitions, and links to other sites and services which may be able to help meet individual needs better.

Although  the  university  and  the  police  will  do  their  utmost  to  protect  and support survivors  of sexual violence, there is a fundamental lack of understanding as to what consent entails is a very real, very serious problem here in Dunedin. It is not only our job to make sure, when we have sex, that  we  have  the free  and  willing  consent  of  our  partners,  but  that  we stand  up for  and support others. We want our city and our university to remain a safe place for everyone, and that involves open communication and acknowledging problems when they occur. Because if there’s no consent, then it isn’t sex. It’s rape.