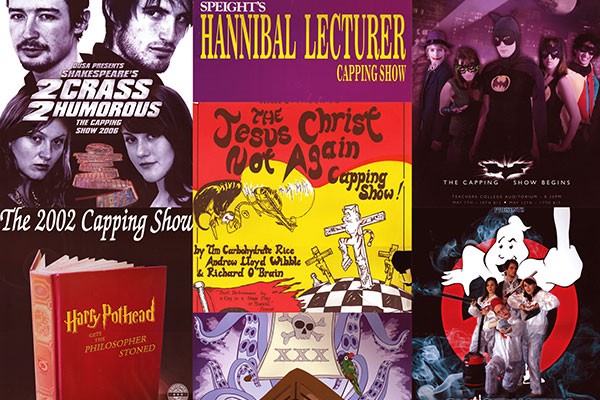 This week you’ll have the chance to see the 122nd annual Capping Show. “Making Grad” is the latest installment in a long tradition of irreverence and hilarity where nothing and nobody is immune to ridicule. Is it all just good fun? Mikayla Cahill investigates the history of the Otago University Capping Show.

Can you imagine jumping up on stage in a weird costume and making fun of the proctor? If you did, you’d be part of a long tradition of Otago students making fun of important people. If you’re a fresher, you may not know what I’m talking about, yet. The Capping show is an epic scale of a high school drama department production, and one that encompasses all aspects of entertainment, from the hilarious Selwyn Ballet, the Sextet, the Sexytet – Otago’s infamous a capella entertainers who offend and delight in the sexually charged, student focused banter, as well as a main storyline accompanied by unrelated comedy sketches, dance performances, and music that ease tension and generate beaming laughter.

The Capping Show has evolved since its debut in the late 1890’s. Not only has it generated huge revenue and successes, it has challenged the views and boundaries of what the audience will find funny for many years. Its glorious and prestigious history is dotted with speculation, scandal, and controversy as well as an insight into Otago University’s unique student culture. The Capping Show is almost as old as the university itself. It has emerged in recent years as a frontier of Scarfie culture, countering the couch burning, class skipping, and unwholesome attitude often associated with the university.

The university did not always perceive the Capping Show so positively. In the past it has upset audiences with outrageous comedy sketches, sub-par acting performances and questionable dedication. Thankfully, under new management and a dedicated team of writers, actors and technical workers, The Capping Show has become a fun and relevant spectacle of student culture, both on and off screen that is enjoyed by everyone who attends.

The Capping Show first began as an unformulated and unrehearsed show at a graduation ceremony in 1889. Students saw the opportunity to take advantage of the three hundred plus audience at the ceremony. They donned costumes and poked fun at those in power through the variety of improvised sketches to popular show tunes of the time. A mere five years after its debut in 1889, The graduation show’s flouting of morals and social expectations of its time garnered disapproval from numerous university officials. After 1894 the shows were not allowed at the graduation ceremonies. The show didn’t end, but it did change ownership. It was taken over by the Student’s Association, and much like receiving a cool new boss who lets you have piercings and tattoos, the graduation show was revitalised.

From this point up until the mid to late twentieth century the structural makeup of the show remained relatively the same – including the infamously notorious acts such as The Sextet, an a cappella group made up of male students, the Sexytet – a female a capella group performing even sexier and risqué numbers than those of the Sextet, The Selwyn Ballet, and of course all of the crass and borderline funny/offensive interludes and sketches – like the video sketch that ripped into Kim Dotcom and his internet party run in the 2014 general election, causing a ruckus of laughter among the audience.

The Sextets, with all its sexually fuelled and borderline creepy banter through parodies of well-known songs, started off as a group of blackface wearing white students who dually called themselves The Coons, and sung racist parodies of popular show tunes, fitting right at home to the controversial but ‘funny-at-the-time’ values of the revue and their audience. Thankfully though, the Capping Show has moved on from its racist roots, and now tries to be just as funny and more progressive year after year. Just as good, are the Sexytets, a group of young women who perform the same cheeky, provocative and innuendo based humour, much of which acknowledges that women are sexual beings who deserve orgasms too. The Sextet, The Sexytet, and The Selwyn Ballet interludes each provide the cheeky tongue poking humour that all of us go through in the brief last few years of immaturity we get to experience during our time at uni.

The Capping Show remains an aspect of student life here at Otago, with great successes along with its fair share of bad seasons and unimpressed audiences. With all the fame and glory surrounding it there is almost a guarantee that at least one small gossip train of horror will emerge from the backstage arena of the glitz and glamour that we see (there is and we’ll get to it. Hold your horses). The ‘bad seasons’ were years where the public and hype around the show didn’t match up with the performance. The centennial show entitled Still Crazy After All These Years that hit the stage in 1994 failed to generate the amount of expected profit and fell short of even breaking even. OUSA had to make up the cost of lost funds and felt weighed down by the lack of professionalism apparent in the production.

Exorbitant cast numbers, a lack of alcohol and narcotic regulations, and technical capabilities all contributed to the negative response from audiences; some people walking out halfway through the performances, despite receiving glowing reviews from the Otago Daily Times heralding the centennial celebration “night of outstanding performance”. These ‘bad seasons’ were not consecutive. The occasional off year usually meant students would work even harder to provide a better show the following year. Alcohol wasn’t regulated before 1994. Many actors were so intoxicated they couldn’t remember their lines, or would project them far too loudly or illegibly. The Capping Show never used to hold auditions; they let whoever wanted to participate be in the show, Jerome Cousins, who oversees the production this year, said that that lead to casts in some case numbered up to “thirty…sometimes forty members”, creating a chaotic and unmanageable cohort of bumbling, undirected students on the stage.

In an attempt to spruce up their image, The Capping Show decided they needed to become more professional. They implemented an ethos of commitment and sobriety both on and off stage throughout the entire process of its creation. As well as the alcohol reforms, a strict and professional, but still a fun and playful process of choosing who could be and couldn’t (or shouldn’t) be involved emerged near the late ‘90s. In other words, if you couldn’t actually act, your chance at being on stage was out the door, according to David Large, author of Capping It All Off: A Change of Scene for the Capping Show.

In 2010, the Sextet was accused by Rape Crisis Dunedin of trivialising both sexual abuse and rape. As a result, the line that was causing particular offence was removed from its song in the Sextet. The charity declined to be the OUSA charity of the year, later revoking and boycotting in 2014, when it was announced as the official capping Show Charity. Large wrote that The Capping Show stuck to a rigid policy of “equal discrimination”, an argument some believe is used to subjugate those offended by acts in the play. I asked Jerome about equal discrimination, and whether it could potentially cause friction or worry among the politically correct population of university students. “As executive producer I get the final say in all content that gets the go ahead and sometimes I do say ‘look, no, it is really cleverly and well written but we just can’t have this in the show… Capping Show has always had an attitude of offend everybody equally so nobody is discriminated against.”

Jerome clarified that the list of  things that were once considered “fair game” and it includes things like  racism, sexism, and ableism that are now actively discouraged and surveyed. He said it is important to remember is that the ideology of equal discrimination hasn’t necessarily evolved nor evaporated, but rather that the content which tackles controversial issues is self-reflexive and self-aware of the situation in which they are satirising.

It is one thing to make fun of drunken scarfie lads, and another to show a sketch of people beating up a queer character with the overhead audio projecting. 10 years ago the show had a skit with the punch line “Gay-bashing: the real fruit hit”, something David Large had enlightened me too. This sketch prompted a harsh, heavy and fast response from UniQ (Otago’s queer rights group), who felt very “uncomfortable with the vibe” of the jokes, who took it up with the Critic to voice their concern and outrage. Despite its setback caused by disappointed audiences and drunken performers, or its policies of ‘equal’ discrimination, the Capping Show has managed to generate a huge amount of success over its lifespan.

Putting aside its continuous battle with issues of political correctness, the cast and crew of the show also know how to let loose and have a damned good time. The Capping Show is famous for its off duty antics as well as their performance. Capping Show after-parties and cast do’s are wild and rambunctious. The intimate connection between those that are often strangers to each other at the beginning of the production disseminates in the keg fuelled, pizza funded all-nighters that are put on to help alleviate stress, and they often include a pants-off hour!

The Capping Show has seemingly resurrected the correct concoction of vital ingredients it needs to present the wider Dunedin community with the nuanced and unique comedic show we are exposed to once a year. Perhaps the “Second Longest Capping Show in the World” claim perpetuates the hype surrounding the event, and it may not always live up to it, but it nevertheless provides a vital stage for young writers, technicians, and actors at the university who are able to present their talents to an audience of 500 people for each of the 10 nights the show runs. It allows audience members an annual glimpse into the unique student culture present at Otago University, whilst also offering commentary on issues and incidents pertinent to the students here.

The fact the show is written by young adults means it is perhaps more susceptible to the risqué jokes and boundary-pushing explored by few comedy shows, and this is a draw for many in the same way that comedian Frankie Boyle or parts of Monty Python are/were for millions. Of course, the years in which the metaphorical line was crossed between dark comedy and offence causing outraged audiences to actively leave the venue can be struck out as anomalies rather than regular occurrences over the show’s history. Such a long running show will always have great years along with substandard ones, just as some performances will go too far and others may not go far enough, leaving the audience underwhelmed.

The shift in attitude towards professionalism in the show’s production processes, and a focus on delivering a concise and nuanced version of the show than had been previously attempted emerged as the show gained credibility and chose to deliver a more widely acceptable and inclusive show to their audiences. Alcohol reforms and the introduction of auditions to be a part of the cast helped create the popular and successful attitudes of the Capping Show we have today. Although a high quality production, with hours and hours of hard work put into it by those both on and off stage, the Capping Show has had issues in the past, perhaps because the focus is often still on trying to mildly, albeit innocently, offend every group in the audience equally. However, a lot of work goes into ensuring that The Capping Show is lighthearted and fun for everyone in the audience! I would encourage you all to go along attend this year’s production of Making Grad, the cast and crew have worked endlessly week after week to make it happen!