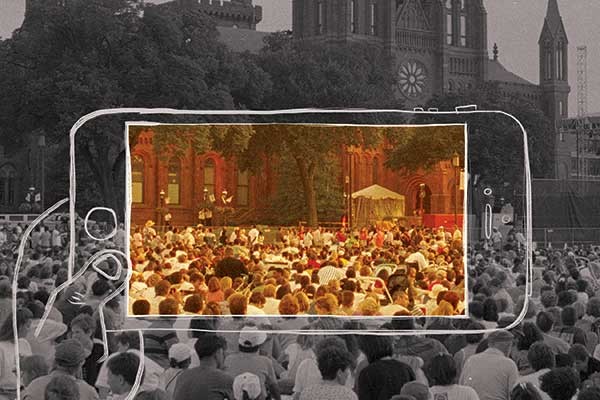 Do You See Me?

When Julie Woods went partially blind in 1984, she was an 18-year-old student at the University of Otago. Her vision declined in a matter of months after she was diagnosed with Starghadtz disease. Starghadtz disease is the most common form of juvenile macular degeneration and affects approximately 1 in 10,000 people. Her loss of sight rapidly progressed as the photoreceptor cells in her retina began to degenerate because of a gene mutation. At the point of her diagnosis, she was offered little support, and she failed half of her first-year papers.

The frequent question “why don’t you just get glasses?” proved to Woods that people had misunderstood and were briskly offering what they thought were solutions. Being embarrassed by the presumptions people made and not feeling she belonged in either the sighted or the blind world left Woods in a limbo for 13 years until, at age 31, she went fully blind. The support system once she became fully blind greatly increased. The relief of finally being categorised as part of a group that society was at least trying to understand and deal with made the situation a lot better. Talking to other blind and partially sighted people was a confidence boost as the barriers of some stereotypes and assumed limitations were lifted.

Now Woods is a professional speaker and coach with a busy schedule talking to people throughout New Zealand. She has completed the 15.5km Papatowai Challenge nine times and walked eight half-marathons here in Dunedin. She has visited the seven Wonders of the World over the last six years and won the Attitude TV Spirit Finalist Award in 2014. She also hosted her own Cooking Without Looking radio show, which won the Supreme Award of the Otago Access Radio Air Awards in 2011. Woods told me that the question she asks herself when any opportunity arises, is “why not?”.

She is as capable of living a full life as any other person and claims that the biggest contributor to her personal success is support.

The support of blindness and partial blindness has grown over the years. The University of Otago has a Disability Information and Support Centre, which helps impaired students undertake their studies at their full potential. Their services include help with enrolment, access to specialised equipment, access to course notes, tutoring, study rooms, organising examination arrangements and reformatting course materials. Walking the campus with a guide helps visually impaired people to become familiar with the university environment. The Blind Foundation offers orientation and mobility support, guiding those who need it until they are comfortable navigating on their own.

Ivan Dodds, a national contact centre advisor for the Blind Foundation, explained that the foundation is a rehabilitating service with a range of support services. These include counselling, technology training, subsidising subscriptions to braille downloads, occupational therapy, adapting houses and managing accessibility. Dodds believes the most important service they provide is teaching people how to use the technology that will enable them to do everything they want to. He pointed out that while some people are born blind, a vast number of eye diseases deteriorate vision and lead to partial blindness. A common condition is glaucoma, which can lead to the removal of the eye/s if left untreated, or if surgery is unsuccessful.

According to a 2013 disability report from Statistics New Zealand, 168,000 people, or four percent of the population, have visual impairments that affect their day-to-day lives. The Blind Foundation states that while these statistics are not necessarily medically verified, they do indicate how many people in New Zealand may say “sight loss affects their quality of life”.

Aine Kelly-Costello, a student at the University of Auckland, has been blind from birth and is a talented swimmer, competing in the London 2012 Paralympics. She is also interested in music and performs classical flute. She studies English and Spanish and is in her third year of university. Kelly-Costello describes navigating around Auckland and her routine of focusing on familiar landmarks, which proves “notoriously problematic” in big open spaces. After a few times it becomes easier, and it helps to have walked a route with a friend’s guidance or with an orientation or mobility instructor. Kelly-Costello believes that the silence of hybrid cars is a problem nowadays, although the “noise hierarchy” of the road has always been difficult to determine. The World Blind Union issued a Status of Quiet Cars report in April 2012, which discussed applying a minimum sound standard to vehicles to make them audible or requiring hybrid and electric vehicles to make an alert sound when they are temporarily stationary.

Although some forms of technology create dangers that need to be addressed, developments in technology have helped blind people in many other ways. Kelly-Costello believes “technology is an avenue that has enabled blind people to feel much more included in society”. She uses her BrailleNote — a “very basic computer with a braille display and speech output” — for everyday work and reads braille sheet music. However, one cannot play the flute properly with both hands and read the music simultaneously — it takes time to commit the tune to memory before being able to play with both hands. Kelly-Costello would love to see improvements in Optical Character Recognition (OCR) software for both text and music because, she says, having a score that is “reasonably accurate” for classical music is “certainly not good enough”.

Louis Braille, a blind French educator in the 1800s, came up with reading by finger and invented the braille system. Braille uses a unique series of raised dots to symbolise each letter of the alphabet.

Braille believed that “[a]ccess to communication in the widest sense is access to knowledge, and that is vitally important for us if we are not to go on being despised or patronised by condescending sighted people. We do not need pity, nor do we need to be reminded we are vulnerable. We must be treated as equals — and communication is the way this can be brought about.” He completed the system in 1824 when he was just 15. The music system came soon after, in 1829, and enabled blind people to read music. After Braille’s death two years later, his system started being taught in institutions, and it still stands today in almost the same form as that in which it was admired and respected by his pupils. Abbreviation shortcuts have been added to the alphabet, but the systematic reading style remains the same.

Two centuries later, advanced technology helps improve the lives of the blind. In 2014, University of Otago PhD student Nabeel Khan developed a smartphone app to help blind people in new places. Khan created a technology that could scan a photograph of the current location and match it to stored information on a database. When the photograph was “read”, the phone would speak out its location and would help the user figure out where to go by providing relevant information. The app was designed as a PhD project, and the prototype was never launched on the market. Brendan McCane, Khan’s supervisor, believes that it is very probable that similar technology will help blind people in the future. However, he believes it will be through something more interactive and personal like Google Glass rather than a smartphone app. McCane imagines that blind people will be able to wear something that tells them where they are and how to get where they want to go.

Colour blindness technology has undergone this kind of development, and glasses that correct colour blindness have recently become available. Ethan Zachery Scott trialled the EnChroma glasses in June this year, which allowed him to see purple for the first time. The glasses help filter incoming light, correcting the hues seen by the eye and allowing those who are colour blind to see colours they have never seen before. Different filters are built into the glasses specific to the ability of a person’s eyes. Multi-notch filters ensure that more than one aspect of colour blindness can be combatted at once, for example, correcting the sight to allow both red and green to be seen.

It is all related to the cones in the eye. The cells that absorb red light are called L-cones, and the cells that absorb green light are called M-cones. Colour blindness occurs when the red and green photopigments overlap more than is normal, making a person see those colours differently to everyone else. The EnChroma glasses drive a wedge between the L-cone and M-cone signals, improving the separation and providing better colour vision to a wearer who has red-green colour blindness. In Scott’s case, the glasses work with the S-cones, amplifying the perception of the primary colour blue, allowing him to see shades such as purple.

Although it seems as if Scott is “cured” of his colour blindness, EnChroma describes the glasses as an “optical assistive device” instead of a cure for colour blindness. Physical imperfections in the eye cannot be “solved” by using technology that doesn’t involve surgery. However, technology can make the lives of those living with partial sight or colour blindness easier. Although this technology can be life-changing for people like Scott, it is important to remember the effects of becoming dependent on a technology and how taking it away may greatly affect the user who has become accustomed to it.

A child born blind today still has to learn that most environments were not built for them: they were designed for sighted people, and they must adapt themselves in order to navigate the world. Communities exclude people with impairments by not making their facilities user-friendly. Having ramps alongside stairs and voice-overs as well as braille in lifts is a good start, but engaging in normal conversation and offering help in public places to people who seem unfamiliar with the surroundings is something that we can all work on.

Woods doesn’t think life got any worse when she went blind. She said, “it has its tricky patches, but when has learning something new ever been easy?” Woods believes most people are very understanding. Some people don’t even notice she is blind and others do, but it’s the little things like someone telling her “the ketchup is in front of your right hand” that make life a bit easier.

Kelly-Costello added: “Considering the scale of injustices the world has to offer, I’ve been dealt an excellent hand!”

Tags:   do you see me? features