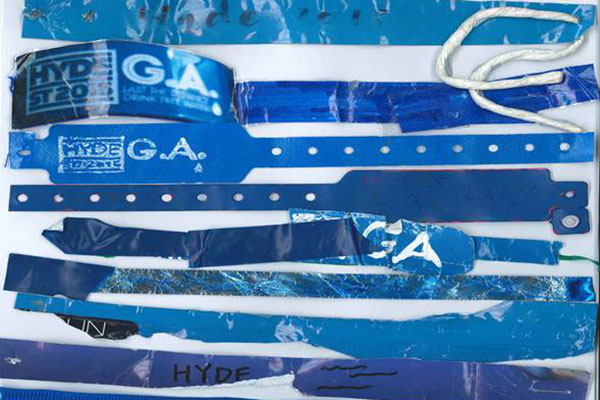 To all those who attempted DIY wristbands, next year you really need to up your game. Shame on you with these interesting attempts!

Saturday 21 March saw this year’s annual Hyde Street Party. With 4000 attendees, there were 15 arrests made. Offenders were detained mainly for disorderly and offensive behaviour, although there was one arsehole who shoulder-barged a St John ambulance on Albany Street in an incident that left a paramedic covered in broken glass. If 3988 party-goers can abstain from law-breaking and troublemaking for the day, one would hope the other 15 feel bad about their behaviour. Of the 15, 10 were students.

This being the third year OUSA has taken the reins in making Hyde Street a more controlled event, and despite the negative media coverage, public opinion seems to be swaying in favour of the new rules and regulations. Temah Bunyan, a first-time attendee of the event, felt that the Hyde Street Party has always been and will continue to be a solidified part of Dunedin culture. She thought that the rules implemented were working well, saying, “No glass, limited numbers, time restrictions; it’s still heaps of fun. Drinking under controlled circumstances is good, it won’t get shut down.”

One of the biggest issues surrounding number regulation in the past has been the frequency of people jumping the fences of corresponding Clyde and Leith Street properties to gain access to Hyde. This year security staff were patrolling these streets continuously throughout the day, and several properties had secondary fences put up in their backyards to prevent fence-jumpers making it onto the street. There seemed to be a surge in fence-jumping attempts following the 2pm cut-off and implementation of the one-way door policy, but security staff were on the ball and few made it through to the event.

In the past, roof-caving and damage to property have been directly attributed to the actions of out-of-towners and/or first years. Many blame the out-of-towners for the irresponsible behaviours, stating that they have no respect or sense of responsibility surrounding the reputation of Otago’s students. First years, before their attendance was prohibited, were also blamed for reckless actions such as the “Dunedin appeal” and the “IDGAF” attitude. Kendall Garrud, a Hyde Street veteran and all-round Scarfie lass was among the first group of freshers to be barred from the event, and in retrospect she feels this was a wise decision. “There’s a naivety, a misplaced sense of entitlement to be way too rowdy that a lot of Otago’s freshers seem to have. I had it, and I probably would have f**ked up if I got into Hyde during my first year.”

With the annual street party comes the annual backlash from news outlets who brand the event as “dangerous”. It would be hard to find the source of this negativity on the day, however, as police officers and security staff all generally seemed to be in good spirits, with most holding the same attitude as Police Officer Dan, who noted that “helping out, keeping [the students] safe, it’s our job.”

Sam, another police officer stationed near the front gates, agreed that the backlash was uncalled for, saying, “Hyde Street is just like the Rugby Sevens in Wellington, except in that case it’s a bunch of grown adults doing just the same thing.”

TV3’s news bulletin, which was released immediately following last Saturday’s shenanigans, not only reused footage from previous years but highlighted irrelevant material. For example, it noted that “the emphasis on speed seems to have dropped.” Critic is confused as we always thought the emphasis was always on alcohol.

One News found that Inspector Mel Aitken of Dunedin’s police is confident the event can be improved in future to make Hyde Street a “safe and enjoyable social occasion for all students.” A jolly group of sailors had a few suggestions for future improvements: “More recycling bins, everywhere, just put them everywhere,” said Michael. Another student, Josh, added that “The free water roaming is great, keep that up.”

Much appreciation goes out for the efforts of OUSA, St John, Dunedin police, Are You OK?, Red Frog and all other staff and volunteers on the day — special mention to everyone walking around with the “Free Water” flags as you may have prevented many a Hyde Hangover
This article first appeared in Issue 6, 2015.
Posted 3:11pm Sunday 29th March 2015 by Lydia Adams.