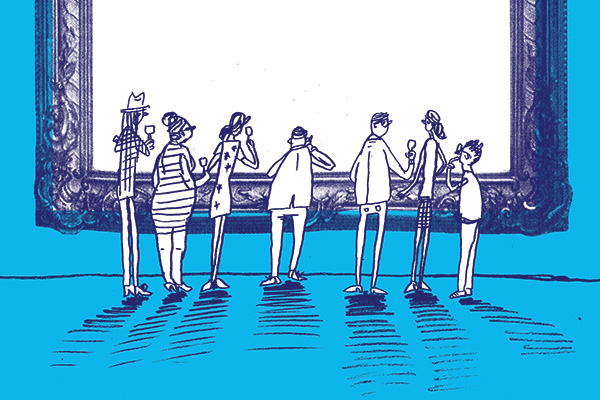 “What does it mean?” is a common refrain when it comes to contemporary art, not to mention the classic “my kid could have drawn that.” Loulou Callister-Baker explores the modernist and postmodern turns in the art world, and debunks the idea that contemporary art is merely lazy and pretentious.

The first time I felt exhausted by art was at the Museum of Modern Art in New York City. Every Friday night at the MoMA is the UNIQLO Free Friday Night, which offers free admission to the gallery from 4pm to 8pm. This free experience, however, comes at a cost: your sanity.

On the particular Friday evening that I visited the huge museum, it was crowded. As I wandered around the galleries, hundreds of people pushed by me, speeding through the exhibitions in a seemingly competitively fashion. The one time I viewed someone actually focusing on an artwork, the girl in question was simply trying to work out how to frame it in relation to her face so she could take a selfie with her cellphone. The rest of my time was spent avoiding the gaze of the many lingering, perpetually scowling MoMA staff who would growl and cough whenever you came within 50 metres of an artwork.

Midway through my visit to the MoMA, I found myself posing in front of a conceptual text art piece, attempting to subdue my increasing crowd anxiety as well as stall my diminishing ability to understand art. On the brink of suffering an existential crisis, an Indian man with a huge red-beaded necklace approached me. At first he used the conceptual artwork in front of us to pick me up; then, in the space of a minute, the conversation transformed into a pitch for his novels about time-travelling Nazis. I politely excused myself from the conversation.

By that point I was exhausted, but I still felt obliged to view the extensive abstract art exhibition on the museum's top floor. Big mistake. Piet Mondrian’s grid-paintings (typically astounding works advocating the idea of pure abstraction and universality in painting by a reduction to the essentials of form and colour) reduced me to insane fits of laughter. I realised I was convincing myself to admire painted boxes of colour and black lines. Is art in the twenty-first century a conspiracy? Is it one big personal in-joke for the cultural elite?

In the twenty-first century, “[i]deas about culture and art’s place within it have undergone seismic shifts,” Karen Raney writes in the introduction to Art In Question. In the past, Raney explains, “it seemed that there were artworks whose meaning was put there by their creators in the process of expressing themselves. The art object was in a separate category superior to advertising, craft, fashion, decoration.” Those with the requisite knowledge could then assess the quality of individual artworks and correctly place the works into “a hierarchy of great achievements.”

Furthermore, the meaning of artworks themselves, the artists’ intentions and the works’ contextual backgrounds (or “what really happened”) were also seen as fixed. Once such decisions were made (by the appropriate people, of course) they were set in stone and hidden from view, never to be meddled with again.

However, a gradual rethinking and re-evaluation of language and meaning interfered with this traditional model. From the 1970s onwards, art history began to widen its focus; no longer content with studying the opaque world of elite art, it embraced a more open view, encouraging people to learn a new language for art and art history. Our conception of “culture” subsequently shifted from being something built on a collection of “great works” to being, as Raney explains, “a set of language-like systems of meaning.” As a result, all types of artistic representation become worthy of our attention.

At many universities around the world, Art History (although still currently available as a degree) was forced to compete or work alongside a new, umbrella degree: Visual Culture. In the art galleries, all forms of culture – from fashion to advertising – were suddenly elevated to the level of art, becoming objects or fragments of culture that could be analysed, interpreted and reflected on. Not only did the meaning of culture change, perception itself shifted from being a “matter of the individual’s eye and mind” to a “social and cultural question.”

Twenty-first century art is dynamic. It reflects emerging science, evolving anthropological understandings of what is local or global, and new patterns of audience participation and interaction (the Among the Machines exhibition at the Dunedin Public Art Gallery is a great example of this). Art now can involve extensions of crucial concepts that emerged from art made in the late twentieth century, like post-modernism and feminism.

Art in the twenty-first century can also be constructed from an inspiring array of materials and means, including the latest electronic technologies like 3D printing and traditional forms of fine art like painting and sculpture.

An example of this can be found in the work of Korean-born artist Jae Hoon Lee, who currently lives in New Zealand. Jae Hoon Lee travels around the world, from Nepal to Antarctica, taking hundreds of photos of the places he visits. After an expedition, Lee then stitches and grafts these scenes together on his computer, compressing a range of perspectives from all different times into one frame that is then printed and placed on an art gallery wall. Lee manipulates scenic clichés to create worlds that are haunting and somehow supernatural, and recently won the major prize at the Wallace Art Trust awards for these works.

What art of this century lacks, however, is rules. As curator and art educator Okwui Enwezor says in an interview in Art in Question, “art is no longer something that is handed down by the Academy, which has laws about how you must see and experience it.” This poses the question: how is art being thought about today, in the absence of such standards and laws?

A New York couple (one a film director that had studied art history, the other an architect) I met while visiting the city outright refused to appreciate the value of any art made after Andy Warhol. They believed that since Warhol, all art has been simply a repeat of something done before, and disregarded the idea that all creations are influenced by, and themselves manipulate, other creations. They also disagreed with the very notion of conceptual art, believing that you should not have to read about art to understand it.

With a belief framework that exists purely in opposition to contemporary art without demonstrating any substance of its own, the couple established themselves as modern-day artistic atheists. As they spoke I thought about artists of the past whose work would have been subject to similar, belittling and popular generalisations. I wondered if they would have been the same people who snubbed works by van Gogh or refused to show Duchamp’s urinal piece at the Society of Independent Artists in 1917.

While change is a word that, when used correctly, can win a presidential campaign, it is one of the most difficult things to accept when it confronts us directly. Works that reflect developing ideas about what “art” is are thus easy to condemn. When my mother bought a collection of painted rocks by Kate Newby, her friends laughed at her and thought she was just being “quirky.” A week or so later, the very same artist won the Walter’s Prize, a $50,000 award for outstanding contemporary New Zealand art.

It takes confidence to stare at a canvas painted all white (or peppered with blue painted pebbles) and see beyond what appears immediately obvious – that you’re pretending to admire something your average two-year-old could have produced. In many ways, it can feel like you are part of the gullible crowd admiring the naked Emperor as he saunters past in his new “clothes.”

The difference, of course, is that a two-year-old does not have the intellectual capacity or artistic skill to knowingly produce a work designed to raise social and cultural questions. In fact, such an accomplishment is probably outside the capabilities of most adults. It takes a complicated melange of perfect timing, skill, luck and connections for an artwork to be shown in a gallery or project space.

Curator and writer Okuwi Enwezor argues that “we constantly have to test our faith in the category of what we call ‘art.’ As annoying as it is to many people that the Tate Modern Gallery is covered with wall texts explaining to people why this art, the naming of something as ‘art’ is not enough.” In other words, it seems that art increasingly requires an element of trust, a trust that you are not being fooled and that there really is something to be taken from a piece.

For me, art is most exciting when its meaning is not instantly clear. Just like I trust a friend who understands music to suggest a good album for me to listen to, when it comes to art I will take on board the thoughts of the gallery directors, curators and art historians who have lived and breathed certain works. Doing me allows me to accept that something truly is “art,” and that’s when the really interesting thoughts can start.

However, valuing art purely in economic terms is problematic in itself, and is often misleading in terms of quality. The price tag of an artwork is explicit proof that art retains monetary value as well as a type of social power, but a large price does not necessarily mean good art. Unfortunately, this distinction between “good” and “bad” art, based on economic value, only muddies the conversation further, and leads, once again, to questions regarding the subjective nature of artistic merit.

In a skit on the TV show Portlandia, a band attempts to come up with a point of difference that makes them original. Eventually, they include their cat in the band, and achieve instant Internet fame. Later in the episode, the band is kidnapped, and responds by making their kidnapper a new member. The scene then shifts to the headquarters of the music website Pitchfork, where one staff member is writing a review of the band in question. As the review nears completion, however, the Pitchfork team suddenly comes to the realisation that everything in music has been done before. Closing the website down, they go home, turning the lights out forever.

Underlying the comedy of this skit is a great message that applies to art today: there will never be a point at which the art world can say, “right, everything’s been done,” turn off their laptops, and go home. This, quite simply, is not the point of art – or music, or culture in general for that matter. You are perfectly entitled to dislike contemporary art, just like people are entitled to believe that any music produced after the 60s is rubbish, but it is ignorant to claim that new art (or music) is impossible to create.

Twenty-first century art does exist, and already I have witnessed it achieve countless incredible breakthroughs. As Karen Raney writes, “the explosive pluralisation of art, the merging of disciplines, the myriad stories being told through different voices and visual languages makes for a field of great turbulence.” It is through such turbulence and conflict that old ideas are questioned and new ideas are formed; through such turbulence that new stories are added to our cultural history.