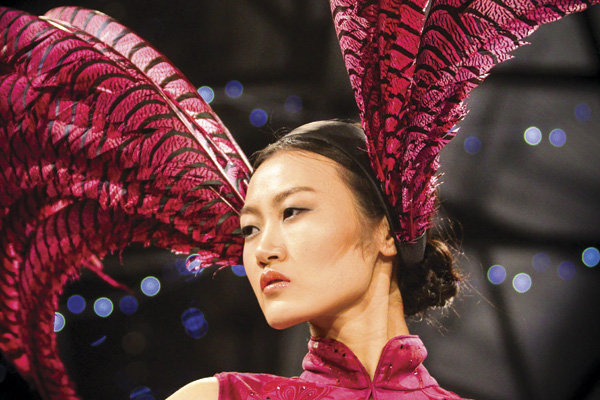 Writing an entire feature about events that you, the reader, either couldn’t afford to go to or would never be seen at is difficult. Fashion is also difficult, but then again, fashion is a fundamental part of all societies and completely governs the way we interact and progress.

Arguably, fashion began by the consumption of one apple. A serpent convinced the world’s first woman to bite from “the fruit of the tree in the midst of the garden.” After both the man and the woman ate the apple, they became aware of their nakedness, covering themselves with fig leaves. The first fashion the world saw was a mixture of leaves and immodest skin exposure. The first interaction between food and people was being told not to eat the food – diet issues in the fashion industry have therefore existed since the industry’s creation. Ultimately, there are numerous lessons we can learn from the wild antics of the dust people in the Garden of Eden. However, there is one that prevails over all others – get anarchist and fashion will be forced upon you. Now we are told to eat apples every day to keep certain medical professionals away – style and fashion is that important.

The closest partnerships between anarchy and fashion can be witnessed at the iD Emerging Designers show. This competition is now in its ninth year and in 2013 it attracted more than 100 entries from 11 countries, representing some of the most prestigious fashion schools in the world. The Emerging Designer Awards is the only fashion competition of its kind in New Zealand. Yet at this event a strange juxtaposition between sports and fashion was created, held as it was in the Lion Foundation Arena inside the Edgar Centre. On my arrival I could see through internal windows to rows of courts on which sport was occurring. A vision of a tidal wave of sweat flooding from two elevator doors aroused my mild kinetophobia. However, despite this confrontation – not to mention the entrance’s ruthlessly exposing fluorescent lights (reminiscent of all gyms ever) – the show has come a long way.

New Zealand’s best fashion school, Otago Polytechnic’s School of Fashion and Design, were the original instigators of the Emerging Design show and remain the show’s drivers. With a very limited budget they continue to do an incredible job. The Polytechnic has created an international portal or access point that allows emerging designers from China to Ireland to have a complete professional experience, paid for by the designers themselves. The show’s partnership with a Shanghai modelling agency is just one element of the international connections. With the show’s combination of professionalism and aesthetic and structural boundary-pushing, Dunedin is a highly relevant contributor to the world of fashion.

The 30 selected finalists, who presented their work on the night, were chosen by Tanya Carlson from Carlson, Margarita Robertson from NOM*d, and Mickey Lin from MisteR. However, the night’s ultimate winners were selected the day before the show by an array of fashion experts. These judges were Stephen Jones (a world renowned British milliner whose clients include Lady Gaga, Vivienne Westwood and Dior), Glynis Traill-Nash (most recently the fashion editor at The Sunday Telegraph, The Grazia, and In Style, who has also appeared on shows like Project Runway and Today), Margarita Robertson, Associate Professor Karen Webster (the Deputy Head of Fashion and Textiles at the Royal Melbourne Institute of Technology), and Tanya Carlson.

The charming Stephen Jones used three words to summarise the emerging designers’ collections: diversity, globalism, and professionalism. Jones then added, “Every single finalist was completely different and they all really believed in what they were doing. This was true emerging design talent at its best – there was an innocence about the collections that was refreshing and inspiring.” Following his speech, the awards were handed out.

Dunedin’s prize for the most commercial collection ($1000) went to Blathnaid McClean from the National College of Art and Design, Dublin, Ireland. McClean’s outfits used feather-like embellishments and hand-painting to recreate the chiaroscuro lighting effect used in German expressionist films from the 1920s. Excellence in Design ($1000 cash and a $2000 voucher) went to Soholong Lim from the Auckland University of Technology. Her Collage Collection mainly used old military bags adapted into the styles of Romare Bearden’s collage, the overall effect being what I imagine female soldiers wearing if they were lost somewhere on the set of Apocalypse Now.

Third Place ($1000) went to Kathleen Choo from the University of Technology, Sydney. The Shanghai models, wearing intricate patterns like white chocolate wrappers, were transformed into otherworldly goddesses. Next, in Second Place ($3000), was Emma Boseley from the Royal Melbourne Institute of Technology. Her collection, Hyperbolic Beauty, exaggerated the body’s natural hyperbolas, creating an almost ridiculous effect that wasn’t far from something Riff Raff from the Rocky Horror Picture Show would wear. Boseley’s clothes also stimulate the constant debate on body shape obsessions in the fashion world. Another designer, Katharina Koen, certainly used her Burberry-gone-pear-shaped designs to make a commentary on body shapes by enhancing and confronting the middle-aged New Zealand woman’s awkward reality of the pear shaped body.

First Place ($5000) went to an Otago Polytechnic student, Rakel Blom, originally from Iceland. When the models wearing her clothes first appeared they induced yells from the audience, which revealed a large fashion school turnout and perhaps some inside knowledge of who the winner was. Blom’s collection, The World Through My Eyes, was an acid trip recreated in clothing – or a morphing together of turf trimmings, poodles and clowns – which somehow made for a loveable sight. The fabric from each outfit stems from a digital print Blom created to capture the culture, history and natural environment of each continent. One judge, Associate Professor Karen Webster, stated, “There was incredible intricate detailing, including handmade buttons, stars cut of Perspex mixed with bold inspiration prints. The collection was a discovery waiting to be made.”

Despite not being winners, many of the other collections were still brilliant. I particularly loved James Bush’s There Is So Much to Fear when it comes to Looking which explored the difference between being and appearance with inside clothing folds being represented on the surface of clothing – I am certain Bush must have had some inspiration by working at Wellington’s Scotties. Jungyeon Hong’s Arithmetic Men was also exciting. Hong draws inspiration from high renaissance art and used mathematical methods and folding techniques to create huge paper lantern creatures.

In its 14th year, the iD Fashion show had a faster pace and more efficiency than ever before. Similar to previous years, the show’s stage was built along the train station platforms and tracks, with several carriages used for seating as well the station platform. From the vantage point of the media photo pit, the model entrance is at a vanishing point in the distance. This year, the show was hosted by two 3 News presenters, Charlotte Shipman and Tova O’Brien (whom former Cabinet Minister John Tamihere called a “stupid little girl”). They jokingly apologised for not being John Campbell (who hosted the event in 2012) but I was relieved they weren’t – when John Campbell is at an event, it’s all about John Campbell.

Rows upon rows of predominantly South Islander rurals on a girls’ weekend away clutched at their Revlon gift bags and bubbly as the first models walked out wearing NOM*d. As always, NOM*d, this time with an astro-punk aesthetic, was so far beyond the other collections that I was sad to see it come out first – it gave me almost nothing to look forward to. Next came Tamsin Cooper for Royal New Zealand Ballet 2013 with a collection commemorating the 60th anniversary of the Royal New Zealand Ballet. Her show was fronted by Auckland Philharmonia Orchestra’s Assistant Concertmaster, Miranda Adams, playing violin followed by two ballerinas in velvet embroidered pieces with glittering attachments. The farmers’ wives were chuffed, with one woman in front of me even commenting, “now this is nice ...” – most likely comparing it to NOM*d (a label which those kind of people find difficult.)

After viewing the exciting innovation at the Emerging Designer show the night before, it was hard to maintain interest in the garments strolling by – I even lost the energy to be satirical or cynical. However, on witnessing Charmaine Reveley’s line I did vaguely wonder if the forgotten linen and yellow fleece towels from my flat’s previous tenants had made its way onto the catwalk. Other designers that featured were Company of Strangers, MisteR, and Storm (“we are not a brand that dictates the trends...”). Selected students from Otago Polytechnic also showed, including first place emerging designer Rakel Blom. A student, Tansy Morris, displayed a bizarre Disney Princess range called Lillies, Lace and Lamingtons – of course this pulled huge applause, because among all the conceptual fashion, this is something the “girls” understand.
However, at these events, the clothes are merely the backdrop to the true entertainment, which comes from observing the audience. The flashing lights and fast-paced music has fascinating effects on the majority. I watched many older women develop a transfixed gaze, almost zoning out of reality to one they imagined for themselves. I saw them transforming into Grease’s Sandy Olsen or some sort of Elizabeth Taylor socialite. These women have dressed up to their versions of perfection and spend the night fully aware of themselves and their movements. The endless bubbly gives them an imminent daring – younger men are entirely in their league while their adult-children and hubbies are irrelevant, non-existent even. This transformation is particularly evident during the show’s 20-minute intermission. A majority of the older women actively choose to strut down the runway rather than walk behind the seating areas. Still in their faraway reality, they believe the attention of the entire world is on them. They pause for a photo on the catwalk, straddling empty wine glasses, then chase their friends back to their seats, giggling furiously.

The finale of the iD show was an extensive retrospective display of Stephen Jones’ hats. This display completely enraptured the audience – one older woman sitting near me, wearing a huge hat herself, sat wide-eyed, clapping for every hat. Noticing my lack of understanding of the strange hats, show-goer Sandy Callister unravelled Stephen Jones’ work for me: “Stephen Jones is not a hat maker, he’s an architect of head space. He’s presenting a range of possibilities. He’s mapping out a territory of what is possible.” There is a reality to what Sandy says. Stephen Jones works with so many celebrities he could have a head that’s too big for his hats, but he doesn’t. Instead he’s incredibly generous with his time and has an infectious enthusiasm for his craft. Interestingly, at an iD event after the Friday night show, Stephen Jones even confessed that his huge finale bird feather hats only arrived after the show started. He had left them in England and there was a huge problem with getting them through quarantine.

Through the interviews I had with designers like Company of Strangers and NOM*d, the world of fashion seemed incredibly layered, complicated and dynamic. It is a strange experience to be transported from this interior world to a careful rehearsed exterior in the form of a catwalk show. It all feels oversimplified. In reality, however, years of research and preparation go into creating something professionally tailored to cater for the appropriate zeitgeist – it’s a miraculous coincidence these collections exist at all. I sat at the show for two hours watching the different ways humans have devised to cover the naked body. Once it was Adam and Eve’s fig leaves; now it’s layered dresses and jumpers and tremendous detailing. While I was walking home after the show finished a thought struck me - if the fashion world is the consequence of the sin of disobeying, perhaps I should disobey a whole lot more.
This article first appeared in Issue 5, 2013.
Posted 6:30pm Sunday 24th March 2013 by Loulou Callister-Baker.