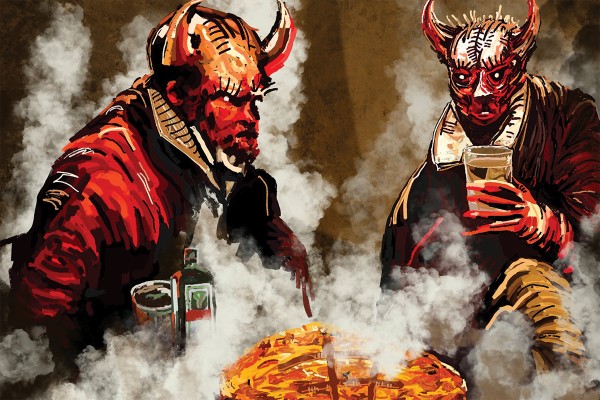 Paganism, Patriotism and Piety: What ever happened to the American Pie?

The reason America doesn’t have mince pie is as simple as it is completely absurd: it was banned, multiple times, by religious zealots.

See, America did have mince pie. And they totally frothed it - mince pie was called “Unquestionably the monarch of pies”, an “American institution” and “as American as the Red Indians”, and also, evidently, as racism. In the early 1900s, the mince pie was everywhere. President Taft celebrated Christmas with a 50-pound (23 kg!) mince pie, mince pies were shipped to American soldiers in World War One, and wagons distributed them during blustery New York winters. And then, suddenly, they vanished.

Mince pies are a staple of the New Zealand experience. They’ve thrived here, where they enjoy a stable relationship with their natural predators: drunk students and tradies. So in order to understand the collapse of American pie culture, we’ve got to know a bit more about pie history, which is quite a bit more thrilling than you might expect. With their roots in the Middle East, today’s pies come from Europe, and originated less as a dish to be eaten and more as a sort of proto-refrigerator. The sugar-and-spice sauce worked as a preservative for meats, and the entire assembly was encased in an inches-thick crust that was not meant to be eaten; instead, pie-eaters would remove the lid, scoop out a few morsels of filling and then reseal the pie, to be consumed over the course of weeks. The filling of the pie was a different beast entirely. Inside, you could find everything from blackbirds to rabbits to rats - basically anything that you could grab and stuff into a pie. The word “pie” itself may actually be short for “Magpie”, i.e, a bird that steals things, or potentially one of many ingredients in the unholy guts of a four-week-old pie.

Somehow, this became associated with Jesus – possibly because the spices came from the Holy Land. Christians would bake 13-ingredient pies, one ingredient for Jesus and each disciple. They would adorn them with figures of Baby J, and eat them at Christmas. Puritans, who ruled at the time and hated fun, banned Christmas, and also effectively banned mince pies. When these Puritans came to America, they brought their piety with them. Puritan William Bradford, Mayflower member and governor of Plymouth, once actually called the mince pie “idolatry in a crust”.

At this point, “mince pie” was not a fruit pie, nor was it a purely meat pie. The mince pie of yore was something in between, laden with cuttings of fat, slices of fruit, spices galore, and a sugary preservative made from diluted apple cider. But because of its religious connotations, early American settlers were forbidden from celebrating with mince pie. Puritan rulers described it as “an invention of the scarlet whore of Babylon, a hodgepodge of superstition, popery, the Devil and all his works”, which really only served to make people want to try mince pies even more.

A loophole was devised. Seeing as the ban was merely on Christmas, not pies themselves, pies could be consumed so long as the occasion was not a “pagan holiday”. Thanksgiving, the new American holiday, seemed to do the trick. Pies became - and still are - an integral part of Thanksgiving. And so, despite the efforts of Puritans to ban the pie, it survived. Puritan influence was on the way out, and the mince pie was back on the ups.

The second attack on mince pie came in the mid 1800s. The pies were still largely the same as before: chunks of mystery meat mixed in with sliced fruit and a sugary syrup, baked into a (now-edible) crust. They were also extremely alcoholic. Hard liquor, made more accessible thanks to the corn-rich Midwest, became a key ingredient in the American pie. This caused some problems, and didn’t much help the taste of the pie, which one reverend described as “very white and indigestible upon the top, very moist and indigestible at the bottom, with untold horrors in between.”

Around this time, a little thing called the Industrial Revolution happened, and pie-making shifted from the home kitchen to the commercial factory. These factories, of course, had almost zero regulations in place, so the already-mysterious meat filling of mince pies was left entirely up to the imagination. People didn’t really care, though, because they were still absolutely loaded with booze. In 1919, the Chicago Tribune found that the alcohol content of an average mince pie, laden with brandy and produced commercially, came in at a whopping 14.12%. That’s a proof of nearly 30, on par with low-strength spirits.

The New York Times said that the mince pie was now “a sacred and cherished American institution”, even though everyone agreed that it caused “indigestion, nightmares, disordered thinking, hallucination, and even death.” Nightmares, somehow, seemed to be not only a completely agreed-upon but also bafflingly desirable side effect of mince pie consumption.

In 1886, the Topeka Citizen called mince pie “unquestionably the most reliable nightmare-hatcher ever invented”, and described how “one plain, innocent looking mince pie will furnish enough nightmares to go round three or four times.” The state newspaper of South Carolina wrote that mince pie’s difficult gastronomical journey was the key to building a better America, because “it thinned out the weak ones”. And finally, upon hearing of a man’s new “sanitary pie”, which was nightmare-free, the Chamberist dismissed it because “one of the chief attractions [of mince pie] was the weird and arousing nightmares which… vary the monotony of pastoral life.” Nightmares, very explicitly, were the whole point.

Not all the nightmares remained in dreamland, however. On one occasion, a jailer was found firing rounds into his prison while under the influence of pie-dreams. On two separate occasions, Chicago men murdered or beat their spouses and blamed the incident on too much pie at supper. Many came to the defence of the pie and the man, though; in a court case for one of these men, the presiding judge actually placed partial blame on the man’s wife for serving him the pie in the first place.

After hearing criticism that mince pie was “hypocritical, seductive, indigestible; a promoter of nightmares, an arouser of the liver to rebellion, an invitation to man's most vicious impulses to assert themselves and do their worst”, The Chronicle wrote that “All such talk is slanderous, insincere, and reprehensible.” The author went on to say that mince pie was actually “a beneficent home influence, a domestic harmonizer, an agent for peace in the family”. And when speaking on the high-profile case of the man who pleaded the pie defence, the Chronicle said that “if the Chicago magistrate should take the trouble to make a thorough investigation he would probably find that the unfortunate man whose case had been noted was demoralised by being deprived of mince pie. Probably his wife refused to make it or didn't know how.”

On the wake of pie-crimes and a national bout of intoxication came the second effort to ban mince pies in America. The Woman's Christian Temperance Union rallied in the late 1800s in an effort to ban booze, and while they originally promised that no “pie riders” would be attached to their booze-banning bill, the eventual 18th Amendment to the American Constitution did technically ban the production and sale of alcoholic pies. But not for long.

In a landmark decision, shortly after the 1919 passing of the 18th Amendment, lobbyists won a case allowing the sale of liquor for commercial culinary use. Booze was back in the kitchen, and this created plenty of opportunity for loopholes. Alcoholic pies were one of the ways to get around the new law, and so yet again, religious zealots failed to suppress the American pie.

But, as we see today, something has clearly repressed American pie culture. When I called my grandma to ask if she remembered the mince pies of yore, she said that the only times in her memory that mince pies were served were on holidays, and while she loved the taste, they were certainly not alcoholic. She reminded me, though, that my great-grandmother Olga would be sent to grade school with a carafe full of red wine to be enjoyed with lunch - at the impressionable age of eight. This was in 1908, right at the peak of American alcoholic pie fever, and fits well into the narrative that the entire American populus during the turn of the century was hammered pretty much 24/7.

At about this same time, in 1908, a physician claimed that mince pie was bad for you. The New Orleans Daily, published where Olga was raised, reported that “the Republican dynasty in Washington may overthrow the federal constitution, [overthrow] the rights of the states and pluck the stars from the blue field of the national ensign, but the mince pie will continue to be the nation’s comfort and pride.”

But, sometime between this fanatical defence of pie and the 1950s, mince pie became not only virgin, but obsolete. One explanation for this could be the refrigerator. With new options for preserving meat, mince pie as a utility item was no longer necessary. It’s also possible that the commercial, canned variety of mince pie was so far removed from the original dish that people lost taste for it and forgot about it entirely. A final option is that women’s suffrage helped keep pie on the decline, presumably because women were sick of being murdered by their pie-eyed husbands and kept the dish alcohol-free.

But the real reason may be far simpler. During World War Two, massive meat rationing was implemented worldwide. This took the mincemeat out of mince pies, leaving them with the fruit and spices that we now associate them with. This may have been the final straw; after pies had been turned from a homely baked good into processed crap, stripped of their alcohol, and finally also stripped of their meat, American pie just wasn’t what it used to be. The glory days of the American mince pie were over, and the nation descended into pieless barbarism.