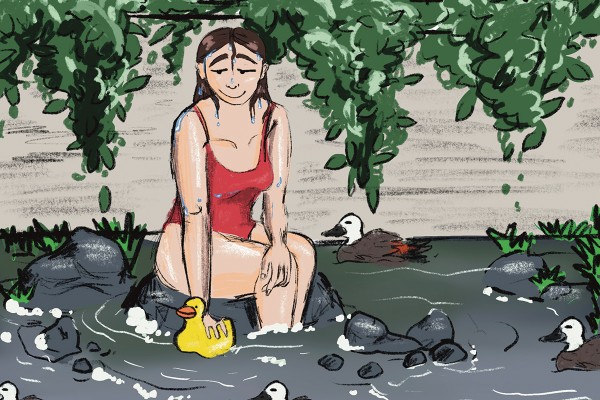 Shower? I Barely Know Her!

Getting Squeaky Clean on Campus

The shower in my flat is garbage.

Water pressure is flaccid at best and the temperature needs to be on mood-stabilisers drugs. So after stumbling upon the showers in Te Tumu, I wondered how many showers are around campus that myself and other shower-seeking students could to use. This led to the strangest treasure hunt of my life: figuring out where all the showers on campus are, and whether or not the chemistry department will let me use their emergency chemical wash shower (spoiler alert: they did not). 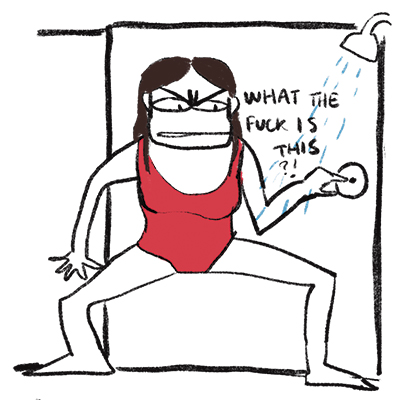 Okay, what in the sweet municipal water supply is this? Is it common knowledge that the showers at Unipol are this terrible? As someone who does not frequent the Unipol showers, I had high expectations as they must get common use. Imagine my surprise walking in and just seeing a single button on the wall, staring at me like some sort of linoleum cyclops. You can’t change the temperature, which may be fine for guys who don’t like to burn their skin straight off their bodies, but as a female I want it to be scorching hot. I want to be able to hard boil an egg - my eggs, even - in the shower, and this wasn’t even warm enough to make me turn all pink and mushy. In the summer this may be fine, but come winter, this is unacceptable. Shower temperature is not your huffer beanie, one size does not fit all. Which almighty Unipol administrator thought this was okay? I don’t know, but I want strong words, and I want those strong words to be said to them while they try to enjoy this shit-show(er).

Not only is the temperature screwed beyond repair, but all the showers are all on timers. Not two minutes or something sensible, but like 30 seconds. This doesn’t stop you from running the water while massaging the shampoo through your scalp but it does take two or three pushes just to rinse the shampoo out. Wynter, a student that I may or may not have ambushed in the shower psycho-style, said that “I swear all the timers are different.” I did not fact-check this, but with how bad the experience was, I believed it. While I’m all for saving the environment, maybe if they were two minute increments I would be inclined to only press it once rather than repetitively out of spite.

Did I mention they were small as well? I appreciate how many showers they have within the fine establishment, as it would be pretty difficult to not have an available shower, so that was great. Privacy was average, but I did not really look at the other factors because I was so pissed off about the loathsome, terrifyingly minimalist single button operation they’ve got going on. 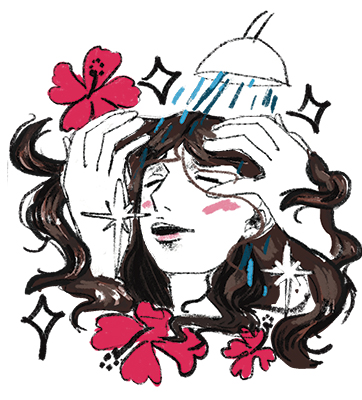 The beauty of showering in the comp sci building is the fact I was probably the first ever person to use them. The showers are a part of the disabled toilets, which gives you a lot of space but comes with ethical considerations. I was sad to see that there are no windows in the room, which can feel claustrophobic. But, if you BYO candle, it can feel more a sensory deprivation chamber, and that’s class. The water also negates a risk of fire hazard, but if you set off a smoke alarm I don’t think anyone is going to take sympathy on you for hogging the disabled toilets to have a personal spa day. So. That being said, the privacy of Owheo is stellar, even outside the showers most people will not make eye contact with you. It’s an introvert’s dream.

The shower pressure was absolutely delicious. The heavy waterfall gives a better head massage than your partner, and it doesn’t get tired and stop halfway through. The showerhead was also adjustable for changing flow rates from fine to thick settings, both of which can also be used to describe me. The only somewhat sketchy thing about the Owheo showers was the green stale towel that was already in the room when I arrived. I used it on the bottom of the mop to clean up the water splashes after I was finished, so if that was your towel, go to Briscoes immediately. I would hate to see what your bed sheets look like.

Vibes: Namaste-inside here forever.
Fungal Infection Likelihood: Maybe if you licked everything but probably not.
Rating: 7/10. 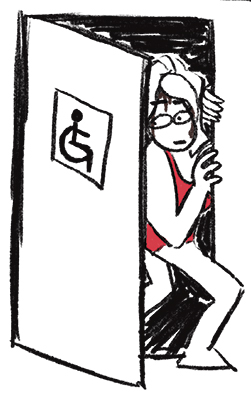 The showers in Te Tumu are the same layout as Comp Sci, again located in the accessible toilets and with the adjustable stream rate. However, there was more lighting in the Te Tumu showers and vibes were just that much better. The most outstanding feature was the smell. These showers smelt absolutely amazing. I did not see any scent diffuser in the room so it must have been installed into the water specifically for the showers for this moment exactly, and let me tell you, I felt like I was in a floral garden soaking up the sun. When reality came back into focus and I remembered I was in a shower on campus, I debated dropping out for the fifth time this week and absconding to the Pacific Islands because I assume they smell like this all the time.

The other added benefit of Te Tumu over the Comp Sci showers is their central location on campus. Owheo is quite out of the way for a lot of people while Te Tumu lies in the middle of campus, perfect for when you sweat your way through a grey T-shirt after carrying your entire team in a group project. This example is obviously nonsense, though, because anyone who wears grey t-shirts has never pulled their weight in a group project.

Vibes: Immaculate and oddly comforting, womb-like.
Fungal Infection Likelihood: I don’t care, I tasted everything in there to try to find the source of that scent.
Rating: 8/10. 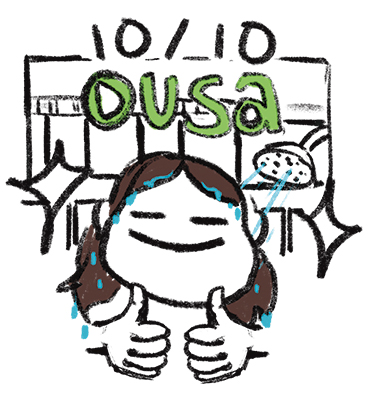 Now this is what I call a shower! Bloody well done OUSA. If your shower ever breaks at your flat, or your landlord decides to do renos without telling you, go to OUSA. In fact, fuck it, if you ever want to feel like a Roman goddess, strut your stuff over to Clubs and Socs and treat yo self. I walked in with togs on, towel around my waist, and a bar of soap in hand and the receptionist didn’t even bat an eyelash. I also had the showers completely to myself, although I did go in the arvo.

They were spacious, they had great natural lighting, and they were incredibly clean. The Clubs and Socs showers are like what a reality TV remodelling crew would turn the Unipol fiasco into. Also, the Uni forces us to pay a services fee, so you might as well save on your power bill and shower at Clubs and Socs.

The stream was heavy and heated up in 15 seconds which is literally the best you could ask for. There were storage hooks and a bench to put your stuff on with enough distance to avoid the splash zone. I can’t recommend them enough.

Vibes: Spa-like quality with a buy-none-get-one-free deal.
Fungal Infection Likelihood: You could eat off the floor.
Rating: 10/10.