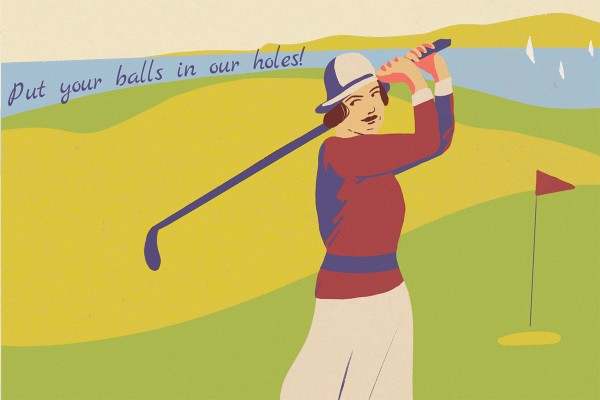 Golf in Dunedin: Par or Subpar?

Ah, golf. It’s got quite the reputation. Maybe you think of it as that thing that your mates do maybe once a week to feel like they’re putting their business degrees to use. Or maybe it was your parents’ substitute for child care after they picked you up from Christ’s College in their new BMW. Golf has all sorts of stereotypes surrounding it, but most suggest that it’s a very environmentally-demanding way for rich white people to make business deals.

But when you think about it, this is a bit bizarre. At its core, golf ought to be a very egalitarian sport: all you need is some sort of club, some sort of ball, and an outdoor area. All you have to do is whack a ball into a hole. In its essence, it really ought to be open to anyone, and in the sport’s infancy, that was certainly the case. So how has it ended up as a hallmark of the privileged, landowning elite?

It’s that last part that does the trick: “landowning”. Golf requires a large amount of space to play, space that could otherwise be used to support the masses. So, in areas where space is in high demand, the ability to reserve huge tracts of land for the use of the few is restricted to the folks who can pay to make sure that that happens. Whenever you have a minority of people controlling a disproportionate amount of space, privilege begins to show.

But in Dunedin, a city that is not really emblematic of richness, whiteness, or even business, these stereotypes are not so true. Dunedin’s course isn’t exactly reserved for a minority of people. Many students use it, and these students aren’t limited to the children of the ultra-rich, like they might be in other parts of the world. The golf courses here are a bit of an anomaly because this large space, instead of being reserved for and by the elite, is actually being used by the public at large, much in the same way that any other sort of large park can be used. And it costs money, sure, but nothing even close to the tens of thousands of dollars demanded by overseas courses.

Aiman, a Dunedin resident and avid golfer, said that golf in New Zealand (and especially Dunedin) is more accessible to people than anywhere else he’s played. “Having so many golf courses here in New Zealand, people just like it. It goes back to people around here feeling like it's a social game.” Coming from Malaysia, Aiman grew up playing golf in a very etiquette-strict and expensive area. When he was a kid, his golf course fees were close to your Uni course fees. He described golf marshals whose purpose was to “go around the golf course and monitor people to tell them to speed up or tuck in their shirts”. When he got to Dunedin, he was shocked to find out that he could stroll down to the course, pay a few bucks, not worry about his clothes, and just enjoy the game the way it was meant to be enjoyed. Aiman frequently golfs in a sweatshirt that reads “power to the people”.

Politics Professor Brian Roper, in an interview with RNZ, said that golf is “heavily concentrated within the world's wealthiest countries, and it's extraordinarily expensive, it's absolutely a sport of the wealthy”. Brian, well known for his political economy and Marxism papers, is also an avid golfer. This contradiction points to an interesting and fundamental facet of golf, purely as a game: that it has the potential to be one of the most inclusive sports, fullstop. “People of all ages can play it. You can be tall, short, small, big and you can still play the game very well,” said Brian. And while golf, in other parts of the world, remains a dog whistle for privilege, in Dunedin, it’s just a game.

It’s not all peachy, though. Dunedin’s Balmacewen course recently landed in some hot water when they decided to raise the membership rates for young people by over 50%, at a meeting held before the start of the University year. Only members who attended the meeting in person could vote. Student members, when interviewed by the ODT, said that this was emblematic of a general distaste for young people at the club, and hinted that they were being priced out. The club denied this, but did openly question the clothing choices of their young members.

Golf clothing is perhaps the most obviously-privileged part of the whole ideal. Having a dress code that requires expensive purchases is a great way to screen out any members who can’t afford those luxuries, whether that’s the intention or not. Aiman sees the sport of golf being “hard to change, but doesn’t mean we can’t change it. The easiest way you can see it changing is the streetwear brands.” He said that “professional golfers are sprinkling acts of rebellion around golf courses such as wearing hoodies during a professional tournament or spicing it up with their fashion.” Recently, there has been a surge of street-brand style clothing collaborating with big golf brands. Eastside Golf x Air Jordan IV released a shoe collab, and Nike and Drake’s collaborative project, Nocta, just released a golf line.

A shift from expensive collared shirts to casual clothing no doubt brought down the price to play, and Dunedin has much more chill rules surrounding course attire. One student described it as “very relaxed”, and James, another student golfer, reckoned that people “should be able to wear whatever they want, it needs to be more inclusive”. James continued to emphasise the importance of a more chill dress code, saying it would “make people feel more welcome at the club”. In Dunedin, you can see the oldies in their tartan and posh pants alongside the youngsters in their hoodies and (gasp!) jandals, both putting away on the same manicured green grass.

But let’s talk about that grass. There is no skirting around the fact that golf is notoriously bad for the environment. Outdoor court-based sports like basketball and badminton are limited in their footprint, but golf is not the only outdoor sport with a large impact. Skiing, for example, also has a huge environmental price tag. It’s no coincidence that skiing is right up there with golf in terms of its privileged stereotype, though; often the sports with the largest drain on the environment are the ones with the bougiest reputation. Land, after all, is at the heart of this whole issue.

Brian Roper, the politics prof from earlier, hopes for organic golf courses in the future. “The way golf courses are maintained globally is environmentally unsustainable. Clearly if you were projecting into the future, the way courses are managed would be very different. Less manicured, less use of herbicides, less chemicals”. In the United states, pesticides are applied to golf courses at higher concentrations per acre than most other types of land, including farmland. The run off of these pesticides is for the most part contained, especially if the slopes are not too steep. However, even some runoff of pesticides can contaminate waterways and damage biodiversity. Further out in Cromwell, the expansion of a golf course from 9 to 18 holes wiped out one of the last populations of the rare Cromwell chafer beetle. The beetle is now restricted to an area of 81 hectares and is critically endangered.

On average, golf courses use around 1.5 millions litres of water per day. In drier places like California, this can lead to detrimental effects. Dunedin, once again, is an exception to this rule, as it rarely faces droughts. But Dunedin’s golf courses are not without their environmental consequences. The unique challenge faced by Dunedin golf courses, especially the ones at St. Clair and St. Kilda, are the sea lions.

Jim Fyfe, a Department of Conservation Biodiversity Officer, has been working closely with Chisholm Links golf club (St. Kilda) to help the sea lions. “Chisholm has been really supportive, and intrigued by, the use of the course by sea lion female Hiriwa to birth her pups the last two years.” Jim reckons the open coastal space of the course “presents a green space of significant potential for Dunedin sea lions.  It is great that the area has not been developed into residential housing and is therefore still available going forward”.  These coastal golf courses have done an excellent job dealing with Hiriwa and her pups which should give you some faith in golfers to care about something other than their two metre put. Jim, in the most heartfelt comparison yet, reckoned that “golf and sea lion recovery are both a long game requiring strategic use of space.”

Dunedin’s golf culture is like most other cultures in our city: it’s weird. Golf here is still a big drain on the environment, and it’s still mostly controlled by a group of older, richer people. But unlike in Malaysia or the US, where course fees can be in the tens of thousands, golf in Dunedin remains firmly within reach for pretty much anyone. The dress code, instead of demanding shirts worth as much as your phone, pretty much just demands that you aren’t naked. And the students who keep this city running are just as much a feature of the clubs as the people you’d expect to see.

Dunedin’s golf courses are representative of this change in a way that many other places aren’t. The culture here isn’t perfect, but the people in charge of it, and the people who attend it, seem to be aware of a much-needed shift back to golf’s roots: back to a game free of social stratification. An excuse to have a few beers before noon, a way for anyone and everyone to enjoy the outdoors, hang out with their mates, and compete in a casual way. Aiman has faith that the sport will eventually change for the better, especially with the new generation of people coming into it. And he’s not alone. For the sake of the environment and for the sake of the social structure surrounding it, pretty much everyone we talked to hoped it would change as well. If it doesn’t, the game that they love, a game that ought to be open to anyone, will be lost. The “golf” we have today is not sustainable, and if we can’t return to the golf of the past, we’ll lose the ability to play the game entirely.