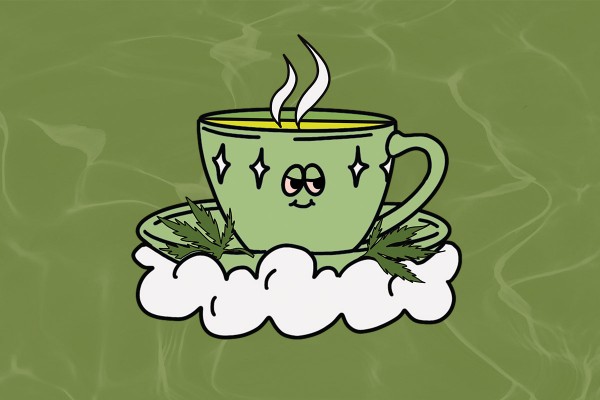 Your path to enlightenment begins with a weed oil. To make it, you need three ounces to a cup of coconut oil. The secret ingredient, which you can get from a health food store, is a teaspoon of sunflower lanolin. The lanolin helps the fats in the oil bind to your stomach, because THC can upset your stomach. Do all the usual: decarb the weed, mix it with oil, strain it, let it harden. Save it for a rainy day or a sunny day or whatever kind of day.

My first experience with weed tea was every Tuesday and Thursday in year 13. My buddy would rock up to chemistry with a thermos full of weed tea. We’d split it, while talking about splitting the atom, and leave the course floating on some sort of chemical cloud. I did pretty well in chemistry, which was definitely due to the weed.

It feels like every cell in your body is vibrating, but also vibing. I felt particularly fizzy. Smoking is cloudy, like a fog that rolls in over your frontal lobe. Drinking weed is like when an airplane takes off and you get pressed into your seat. It’s comforting, like a weighted blanket. It’s also somehow much more dignified than smoking. Even though it’s stronger and lasts longer, it feels bougier and less like an addiction.

You get mentally stoned, but the body high blends with that and makes a more holistic experience. There’s a reason than all the wise men and shaman (and shawoman) of yore were sipping tea.

I could easily smoke some joints and go for a walk, but after drinking tea, if I went into town or tried to do something normal, I would need to stop and lie down on a park bench. You feel like your body is emitting a frequency that everybody can detect.

Weed tea is a knockout punch. It feels really good to be horizontal. To stretch your body, to feel the grass. And by “feel the grass”, I really mean ‘feel the grass’.

Pairs well with: chemistry class, drifting through time and space