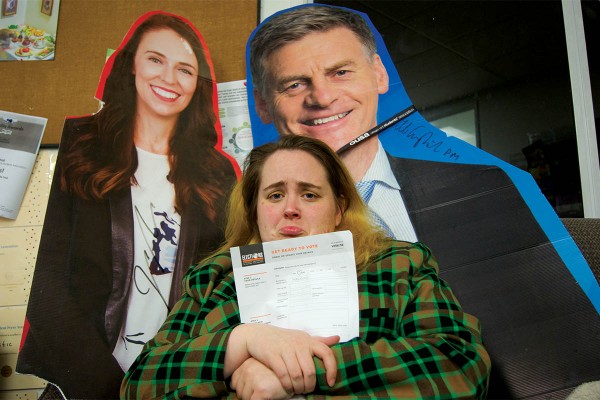 Editorial | Let Students Vote On A Day Without Exams

None of this is a hot take: Once you’re at the ballot box, all you have to do is tick a couple of times. Once for the person you think would best represent Dunedin, another for which party you think would best make decisions for the country, and then either a ‘yes’ or ‘no’ for both the Cannabis and Euthanasia referendum questions.

At this point, you have no control over which candidates or parties are on that list, what they stand for, and what they would do with your mandate. As anyone who watches the news will know, politicians can say and do pretty much whatever the fuck they want. That, my friends, is representative democracy.

Real politics is just everything on either side of a general election. It’s the everyday choices you make - what you buy and if it’s local, if you recycle or try to live a zero-waste lifestyle. It’s whether or not you make submissions to whatever the local, regional or national governments are scheming. It’s if you pay attention, and react accordingly when something you think is fucked happens in your community. It requires buy-in.

For a lot of people, their first election is that buy-in. They don’t see their everyday actions as being political, only the grand gestures like casting a vote. Their political participation begins and ends with the General Election. It’s the spectacle of picking a team, and then treating politics like a sport. They want their team to win and the others to lose. The polls are the points, baby.

But young people haven’t had that experience yet. They don’t have the same level of buy-in as older generations, and this kind of disenfranchisement or would-be apathy is really just a result of not having that first hit of having your team win. Maybe that part is a hot take.

THAT BEING SAID, no matter why or who you vote for, voting is still really important. Just because the candidate you vote in for Dunedin ends up to be a bit of a dick, or even if the party you elect doesn't follow through on promises, this form of representative democracy is all we have. I don’t see any revolutions happening anytime soon, at the very least because of the Covid-19 100 person limit on gatherings.

It’s really messed up that the Uni isn’t accommodating the exam timetable around election day. We already know that young people are the least likely to vote in an election, and that most people don’t vote in advance. For young people who have never voted before and probably never had the civics education (which isn’t mandatory to teach in schools, by the way) to learn all of the boring but necessary functions of a government and cabinet and all that shit, completing their exams with a good grade is a much higher priority than standing in a line for a couple of hours. Especially if they think their vote doesn’t matter. Do you know what matters? Getting that B+ average so you’re eligible for a Postgrad programme and remain nestled in the womb of academia for another couple of years, safe from the job market.

I just don’t get how an education provider and governmental institution like a university doesn’t just extend the exam timetable by one measly day to accommodate the single biggest political event in three years. Yeah, the admin would probably suck, but would it suck more than if 1530 fewer students vote in the General Election because they didn’t want to risk their GPA slipping?

The Uni needs to encourage students to get behind a team and bring the noise like they would any other game day. Having exams on election day is discouraging an already discouraged group of voters. Sort it out, Otago.